Pay to play: Kurt Cobain‘s personal Seafirst BankCard Visa and “King of Clubs, Slot Club” card holder are headed to auction. The Nirvana frontman signed the card in blue ballpoint pen and apparently wrote what appears to be a phone number on the back of the card, which expired in February 1995 – less than a year after the singer-songwriter’s death. Auctioneer Paddle8, which is offering the item as part of its “Legendary: Memorabilia From Rock Gods and Pop Stars” collection, expects the piece of plastic to fetch between $7,000 and $9,000.

Also up for auction is Frank Sinatra‘s driver’s license from 1944. Expired the next year, the tattered cardboard ID sports the then-28-year-old singer’s signature, as well as his address in Hasbrouck Heights, New Jersey. At the time, the crooner had recently signed to Columbia Records and by that time had racked up a number of Top 10 hits. In 1944, his “Saturday Night (Is the Loneliest Night)” bowed at Number 2 while his recording of “White Christmas” reached Number 7. Paddle8 estimates the license will go for between $8,000 and $10,000.

Sundance 2015: Brett Morgen on Cobain, Courtney and 'Montage of Heck' 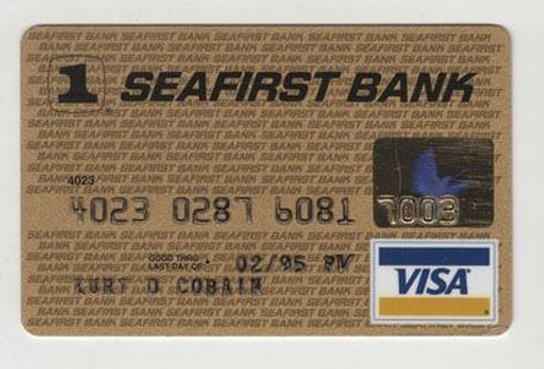 Another interesting item in the auction is a handwritten U2 set list from when the band was touring in support of War. The concert, which contained songs like “New Year’s Day,” “I Will Follow” and “Sunday Bloody Sunday,” took place in February 1983 at Aberdeen, Scotland’s Capitol venue. The item includes a ticket stub from the show. Paddle8 estimates the set list and stub will garner between $4,000 and $6,000.

Other items in the auction include rare photographs of the Doors, Jim Morrison, Bruce Springsteen, Jimi Hendrix, the Who, Led Zeppelin, Pink Floyd, the Beatles and Sinatra, as well as a poster advertising Sgt. Peppers Lonely Hearts Club Band. Paddle8 has also gathered together a number of photos and other items signed by the Beatles, including a copy of Revolver signed by cover illustrator and Plastic Ono Band bassist Klaus Voormann.