KRS-One gave a lecture at the Tucson high school singled out for violating a state law banning certain approaches to teaching ethnic studies. The rapper, whose “Introduction to Hip-Hop” was targeted as being illegal to include in Cholla Magnet High School’s English From Culturally Relevant African-American Perspective course, came to the school’s Little Theatre on Wednesday to share his perspectives on self-esteem and the keys to successful living with several dozen students.

Over the course of his nearly three-hour appearance, he implored the students to “chisel out who you are,” according to an article on the Tucson School District’s website, and to encourage one another. “When you feel great, you see others as great and you add value,” he told the students. “Lift them up and show other cultures how great your culture is.”

When the lecture was done, he engaged the audience in a Q&A session, posed for selfies with students and teachers and met with students one on one as a hip-hop session and breakdance party broke out. He told the students that they should be proud of their school for having him in. A student and aspiring rapper named Dyre commented, “It was great to learn to be confident in myself.”

“It was an amazing experience and it meant the world to me and my students,” instructor Andrew Walanski, who teaches the targeted class, tells Rolling Stone. “Everything he said was poignant, and I’m still trying to process all of it. The students really appreciated the message that ‘once you make yourself, you know yourself’ and you get to choose and make who you are, and you are great. Nobody else can tell you who you are and what your value is, that comes from within. Also, the idea that ‘value is created by the story we tell’ and we write that story not only through our history and ancestry, but every day we live we make new history and our speaking to the future.”

Walanski says the students appreciated KRS-One’s authenticity, particularly how he related that when Cholla High employee Rashida Jeffrey thanked him for the visit, he replied by saying, “Don’t thank me for fulfilling my responsibility.” “He told us we should expect our artists and musicians to come to our schools and they should be eager to get involved with our young people,” the teacher says. “It let the students know that this was about them and they were the ones that were important.” 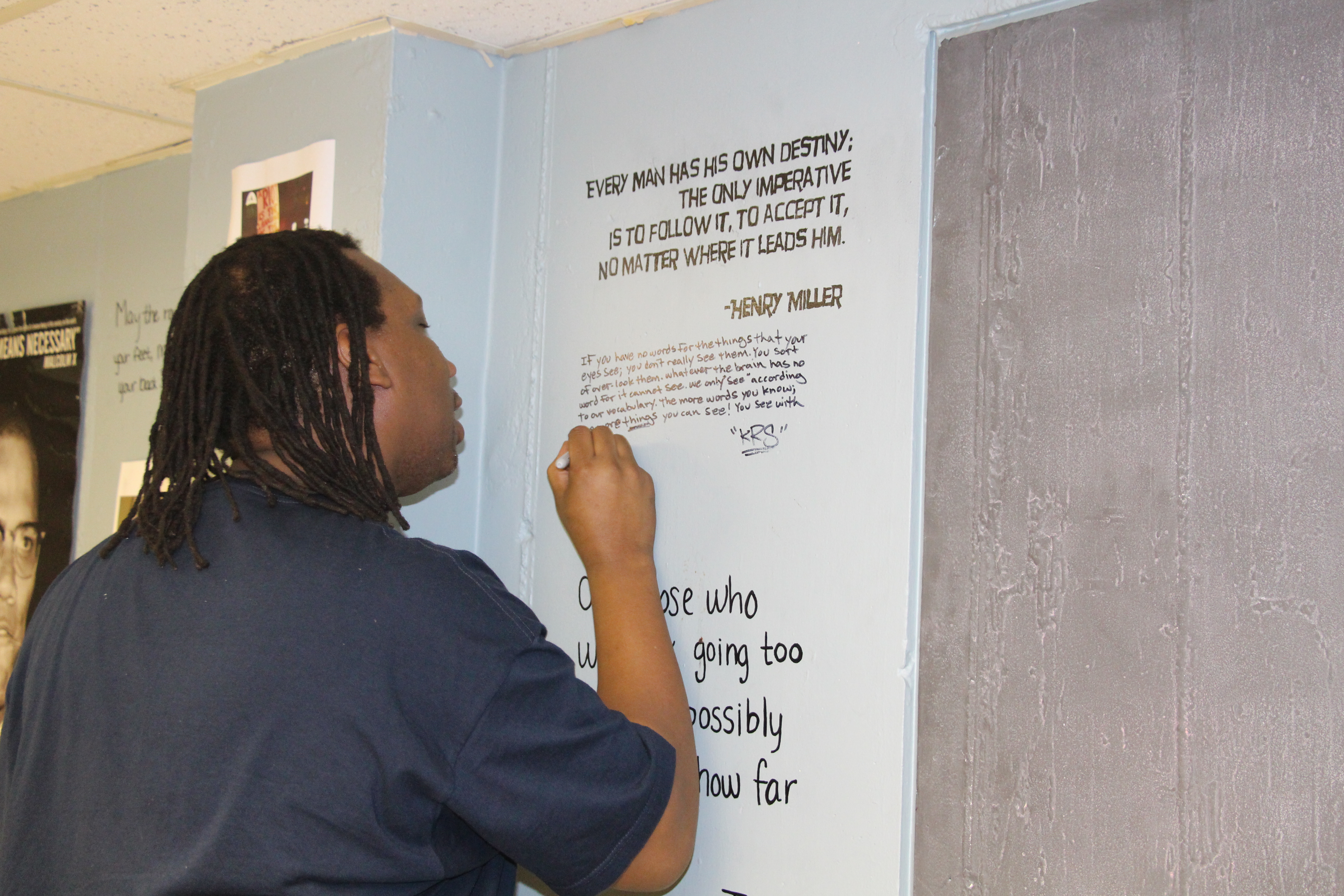 When the lecture concluded, Walanski brought the hip-hop pioneer to his classroom and asked him to add a paragraph to a wall between quotes from Henry Miller and T.S. Eliot. “If you have no words for the things that your eyes see, you don’t really see them,” the rapper wrote. “You sort of overlook them. Whatever the brain has no word for, it cannot see. We only ‘see’ according to our vocabulary. The more words you know, the more things you can see! You see with your brain, not your eyes.”

“His presence sums up what Culturally Relevant Courses are all about,” TUSD’s Coordinator for Culturally Relevant Pedagogy and Instruction, Lorenzo Lopez Jr., said. “The educational experience adjusts itself to the needs of the students. The relevancy of having this internationally-known artist in their school brings the educational experience to life.”

“This is what teaching is all about,” Cholla Magnet High School Principal Frank Armenta said. “Now their job is to take it from here and move it on. It’s a global community, and it can start here and go worldwide.”

Cholla’s ethnically focused classes came under state scrutiny, along with other courses taught in Tucson Unified School District, on the last day that John Huppenthal, the state’s superintendent of public education, spent in office. He sent a “notice of noncompliance” to the district superintendent claiming that teaching KRS-One in Walanski’s class and including the lyrics to Rage Against the Machine’s “Take the Power Back” in a Mexican-American-focused history course, along with other instances, were illegal.

Specifically, these courses violated a state law that prohibits classes from teaching courses that “promote the overthrow of the United States government,” “promote resentment toward a race or class of people” and “advocate ethnic solidarity instead of the treatment of pupils as individuals.” Currently, the 9th U.S. Circuit Court of Appeals is reviewing the law and questioning its constitutionality.

“I think it’s so awesome that Zack de la Rocha’s lyrics move people the way they move me,” Rage bassist Tim Commerford tells Rolling Stone. “He’s so smart and so are the educators and students who choose to use his lyrics to teach and learn to take the power back.”

A new state superintendent of public instruction, Diane Douglas, took office at the beginning of the year and, after reviewing Huppenthal’s notice, decided that the courses were still illegal. She met with TUSD’s superintendent, Dr. H.T. Sanchez, and gave the district 60 days to change its curricula or face a reduction in budget.

Sanchez told Rolling Stone that he would work on correcting the violations but wanted to continue to support the use of music as a teaching aid, as long as its lyrics are appropriate. “Music is able to show that certain struggles aren’t new to this generation but transcend generations and that we’re still trying to solve the same problems,” he said. “I think any media that does that is appropriate.”