For 24 years, the Los Angeles radio station KROQ has used its muscle as one of the leading alternative stations in the USA to recruit top-notch talent for its annual Christmas concert full. Last night, the first of two for the KROQ Almost Acoustic Christmas at the Shrine Auditorium, demonstrated that when you do something for two decades, you get pretty good at it. Although nine sets between 30 and 45 minutes each meant a total running time over five hours, the show moved at the brisk clip of an old-fashioned R&B revue. With a revolving stage, there was no downtime between the acts, which provided an entertaining overview of the state of modern alternative rock. (In order: Foals, New Politics, Grouplove, Cage the Elephant, Arctic Monkeys, AFI, Queens of the Stone Age, Vampire Weekend, Kings of Leon.)

In keeping with the Christmas spirit, we have prizes and superlatives for everyone. 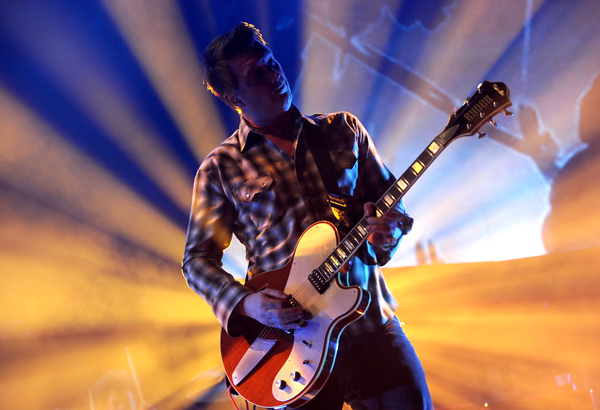 Best Set
Queens of the Stone Age were the heaviest band of the evening – and the most swinging. Frontman Josh Homme awarded the group another title himself, telling the audience that they had been booked because they were “the drunkest band” on the bill. The high point of the night was their last song, a version of “A Song for the Dead” powerful enough to require a UN weapons inspection team.

Biggest Lie
The “acoustic” in the show’s name was true only in the sense that all amplified sound is acoustic. “There isn’t an acoustic guitar for forty fucking miles,” objected Josh Homme from the stage. During Vampire Weekend’s set, Ezra Koenig did defiantly play an acoustic guitar – for one song.

Oddest Guitar Showmanship
Kings of Leon mostly seemed bored during their headlining set. But at one point, lead guitarist Matthew Followill started playing his guitar with his teeth, mimicking a famous Hendrix move. Except he wasn’t soloing at the time, or even taking the spotlight – he did it matter-of-factly, as if he could only get the right sound by employing his incisors.

Most Incongruous Image on the Back of a Lead Singer’s Jacket
This title would have gone to Davey Havok of the goth-punk AFI: his upside-down cross wasn’t surprising, but the fact that it appeared to be bedazzled was. But then Ezra Koenig of Vampire Weekend went onstage, and embroidered on his back was Babar the Elephant.

Best Set for a Half-Empty Theater
The British band Foals did a great set of industrial-flavored dance rock: it was majestic, slinky, and deserved to be heard by the full crowd. 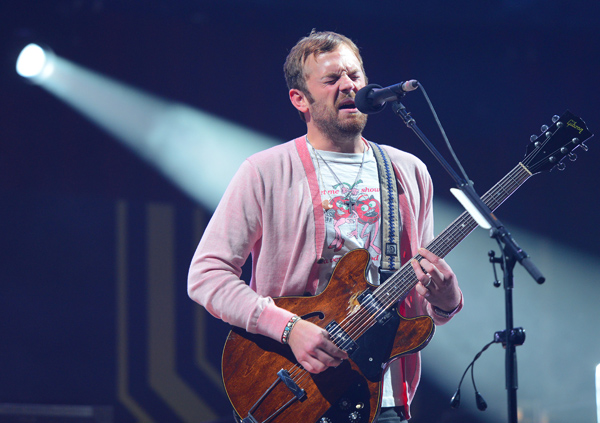 Most Arrogant Lead Singer
Alex Turner of the Arctic Monkeys posed for imaginary album covers, preened, and told the crowd, “We are the Arctic Monkeys, everybody – the best band out.” Fortunately, the group mostly delivered, with a live set that emphasized the heavier side of their garage-rock sound.

Most Excessive Use of the Smoke Machine
Cage the Elephant came onstage surrounded by cumulus clouds of dry ice – but once the air cleared, the six-piece band settled into a quality Southern guitar groove, like Lynyrd Skynyrd reborn as a modern indie band.

The Band That Most Looked Like It Was Put Together by a Hollywood Casting Director
Grouplove was the real-life version of a band in a movie where each member seems to have been drafted from a different subculture. Drummer Ryan Rabin (the son of Yes’s Trevor Rabin) had a rave haircut and a bright smiley-face shirt. Guitarist Andrew Wessen looked like he had just been released from the Hair Metal Cryogenic Chamber. Adenoidal singer/guitarist Christian Zucconi with his dyed green hair occupied the middle ground between bohemian and homeless guy. Keyboardist/vocalist Hannah Hooper was a blonde in a skintight one-piece, dancing up a storm. And bassist Sean Gadd just chilled out in a cardigan. (Unfortunately, the band’s dance-rock music had much less impact than their look.)

The Only Woman
The nine bands collectively had one female member: Hannah Hooper of Grouplove.

Coolest Logo on a Bass Drum
The Arctic Monkeys had “0114” taped onto their bass drum – that’s the British area code for the city of Sheffield, where they’re from (although they’ve relocated to L.A.).

Most Erudite Video Backdrop
One of Vampire Weekend’s chosen video images was a static close-up of an Ottoman textile. Their music was in the same mode of erudite and winsome, a refreshing change of tone in an evening full of guitar aggression.