A theory: Run the Jewels, the acclaimed duo of Atlanta rapper Killer Mike and New York rapper-producer El-P, works because the two like one another genuinely, and it shows. It’s as if Run the Jewels, an evolution of El-P and Killer Mike’s initial 2012 collaborations, were conceived as an opportunity for them to hang out more.

“This isn’t some bullshit, this isn’t some vanity record,” El-P said of the free-to-download Run the Jewels album on Wednesday night at New York City’s Webster Hall, in the final show of the duo’s North American tour. “We didn’t have any money. We didn’t have a marketing plan.”

That comment reflected the sincere nature of the night. Not that El-P or Mike are softies, exactly, but their stage aggression belies their love and kindness for each other and their fan bases, which have blossomed with their collaboration over the last year.

The wisecracking host of the evening, blogger Dallas Penn, called Run the Jewels the “rap album of the year.” El-P said the supporting tour has been “the most amazing tour I’ve ever had in my life.” 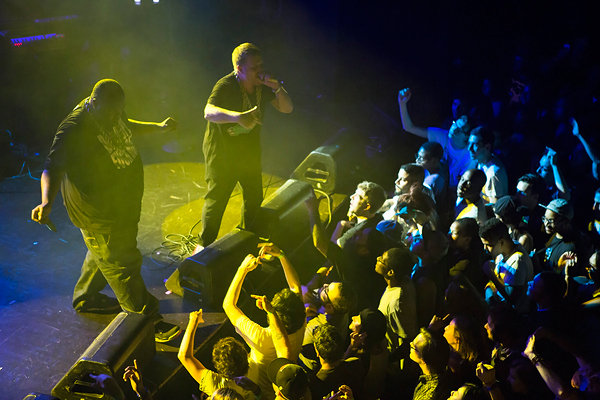 Those superlatives made the show feel like a victory lap, with past collaborators and tourmates Despot (a Queens native and longtime El-P collaborator whose dad was in the audience), Mr. Muthafuckin eXquire and Kool A.D. setting the pace. Then it was Killer Mike’s turn, giving a young crowd seasoned advice to “vote locally” and “take care of each other” in a short solo set with consecutive blasts of “Big Beast,” “Untitled” and “Reagan.”

“That means if you are a gentrifier, introduce yourself to your neighbors,” he said, as if speaking pointedly to the non-native Brooklynites in the crowd like a rap-game Ian MacKaye.

El-P opted for a less explicitly political approach in his solo set, but was no less confrontational. The repetitive chanting of “Drones Over BKLYN” evoked what Allen Ginsberg called “listening to the Terror through the wall” of urban living. Perhaps not unrelated, he called his song “The Full Retard” “incredibly depressing poetry.” And El-P, like opener Despot, shouted out family, too: his mother, who was also in attendance.

Then Killer Mike and El-P became greater than the sum of their parts. Run the Jewels are a collaborative kismet that show today’s rap game – full of solo upstarts who often cut guest verses cities away from another artist or DJ – that there’s magic to be found in closer collaboration, as felt in “36” Chain,” “Sea Legs” and the title track “Run the Jewels.” 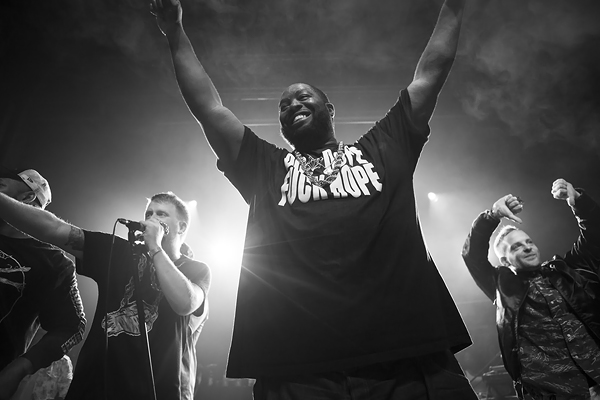 For all the braggadocio in these songs, and in hip-hop at large, Killer Mike and El-P kept Run the Jewels fun, even funny, with an appearance from Prince Paul in character as the pervy Chest Rockwell on “Twin Hype Back.” The night was full of smiles, restrained giggles and even some sweet moments.

“Hey Mom, remember when I got kicked out of all those high schools?” El-P said, looking up to his mother in the balcony, pointing to the crowd of rowdy rap fans on the venue’s floor. “This is what I was gonna do.”

Through the evening’s sharp edges, sizzling sounds and shit-talking, it was refreshing to see two stalwart rappers act so positive. Hip-hop may thrive on competition, even rivalry, sure, but Run the Jewels show it can thrive on camaraderie, too.