Kid Cudi has never been your typical emcee. “Day ‘N’ Nite,” the rapper’s unexpected breakout hit, a slurry confessional of lonely nights spent puffing the funny stuff, became a surprise single of a party anthem, thanks to remix treatment courtesy of since-disbanded Italian DJ duo Crookers. Lost amongst the hype, however, was the Cleveland-born spitter’s message: Life isn’t pretty.

So those who had long followed the emcee should not have been surprised by Saturday night’s highly emotional concert. Cudi spent a good deal of his time onstage at the University of Illinois’ Assembly Hall in Champaign exhuming his internal struggles. It was the second stop on a mini-tour of colleges leading up to the release of his third studio album, Indicud, due April 23rd. But the rhymer – dressed in a traditional gray hoodie, black shirt and Indians cap – was none too shy about flexing his emotional muscle. “This is like a big therapy session,” he told the adoring crowd, echoing his statement to Rolling Stone in 2009 that he needs “to see a shrink.” Later, he prefaced the title track of his second album, Man on the Moon II; The Legend of Mr. Rager, dedicating it “to all the fucked up kids like me.”

Cudi, 29, claims the entirely self-produced Indicud is far more of a step outside the traditional hip-hop confines than normal for him. “It’s a whole brand-new monster,” he told the crowd on Saturday, taking it a step further and declaring his new album to be “what my first album should have sounded like.”

But it was his first album, Man on the Moon: The End of Day that made him a star. To that end, he ripped through its standout singles – from the MGMT-sampling “Pursuit of Happiness” to “Day ‘N’ Nite” – with gusto on Saturday, eliciting some of the night’s biggest roars.

The evening’s most exciting moments, however, were the least expected ones: Opening act King Chip joined Cudi for a spitfire collaboration on the rapper’s menacing new track “Just What I Am”; later Cudi arranged himself on a stool at stage-center, and went a cappella, singing a stirring take on his debut album’s floating ballad “Up, Up And Away.” 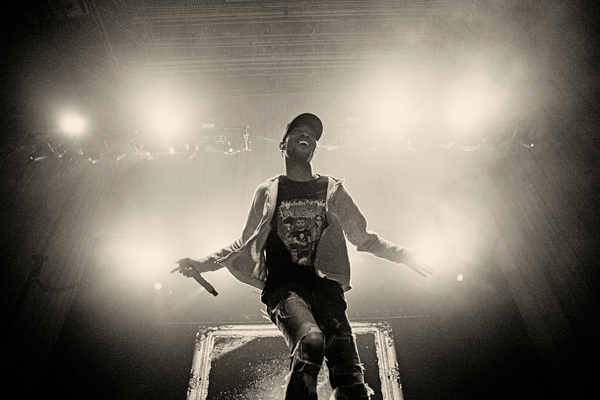 The rapper does respect tradition, though. And so followed the obligatory pot-toasting cut (“Marijuana”), a laid-back track that people could “relax and fuckin’ kick it” to (“Ghost”) and a slow-jam (“Mr. Rager”) with  audience-lighter accompaniment.

“I’m always proud of my work,” Kid Cudi later confessed. He then paused, gazed out at the audience and happily soaked in the crowd’s consistent adulation. Because, despite having a hit album and the financial backing of Kanye West and his G.O.O.D. Music label, Kid Cudi still appeared a bit unsure of himself. “I can’t sleep at night ’cause I’m so fucking excited for you to hear [my new album],” he admitted.

Then the audience roared back in approval, temporarily easing any of his concerns. And, for one of the first times all night, Kid Cudi smiled.