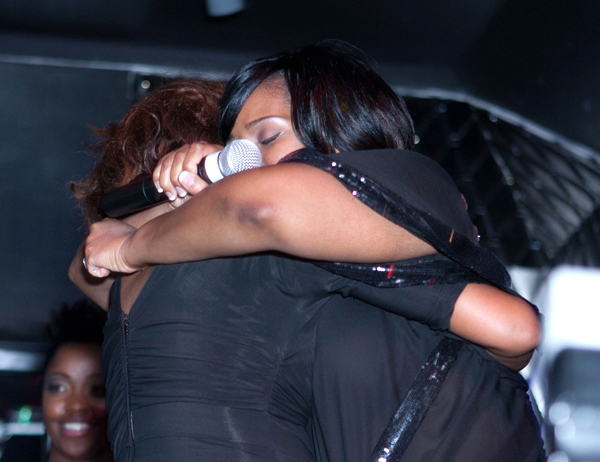 On Thursday night, just two days before her death, Whitney Houston showed up at R&B singer Kelly Price’s pre-Grammy celebration. The two old friends even sang a duet of “Yes, Jesus Loves Me.”

Talking to Rolling Stone last night, Price – who was clearly struggling to control her emotions before succumbing to tears near the end of the interview – said that the song was a fitting one.

Photos: Whitney Houston Through the Years

One of the reasons Price wanted to speak under the difficult circumstances was to address resurfacing rumors surrounding Houston’s problems with addiction. Price wanted to talk about the Houston she saw Thursday night, not the troubled diva depicted in the media in recent years. The specific circumstances of Houston’s death are still unknown, but reports surfaced Sunday that the singer may have drowned in the bathtub. Law enforcement officials at the scene Saturday evening said there was “nothing obvious at this time” for cause of death and ruled out foul play. Houston had been attending out-patient rehab program in May 2009 for drug and alcohol treatment.

“Things people want to allude to are not what I saw,” Price said. “There was no craziness going on, absolutely none of it. It was a great musical event. And honestly, I’m saying it because her daughter was there with her, my two children were there with me. It was an atmosphere that lent itself to being okay for our kids to be there. So that’s what was going on.”

What Price saw instead was a close friend celebrating music and having a good time. “She came down, and we had a ball like we always do,” Price said. “We laughed, danced, sang and cried and talked about the stuff that we talk about – the kids, life outside of the business. It was good, she was good. It was great, she had a good time, she was happy and that was all night long,”

For Price, Houston’s generous spirit is what she’ll remember most about the singer. “She was not just a phenomenal singer, she was an amazing person. She was very giving, she would give you her last,” she told us. “And the way we were with each other on Thursday night is the way she absolutely deserves to be remembered, celebrating somebody else because she loved them and she wasn’t afraid to put somebody else forward.”

Houston often advised her friend on how to survive the industry. “She’s told me what pitfalls to watch out for, how to keep from falling into certain traps, about how this business can just tear you apart if you let it.”

Price said Houston imparted to her the importance of keeping a healthy balance between work and family. “She told me, ‘Do whatever you can to maintain normalcy at home. Do whatever you can to be there with your family, keep your family around you. Don’t let this business define who you are at home, don’t let it become your everything because this wonderful gift that we have will also, if you’re not careful, and you allow the business to consume every area of your life, it will tear you apart.'”

“She showed up to that party on Thursday night not as a diva. She came and sat in the background and watched me shine. She pushed me to shine. That’s the Whitney I know, that’s who they need to understand she was,” Price told us.

Price continued, remarking on Houston’s willingness to help a fellow musician and her desire to connect. “It wasn’t just about the Grammys, it was about knowing that through it all, things that she told me, I took heed of them and I believe that there are even some things she might have fallen prey to and some pitfalls she experienced throughout her life and her career,” she said.

“[Houston’s] goal in advising me was to keep me from having to face the same issues as her or the same problems,” Price said. “And I heard her when she talked to me, and I took it to heart. It wasn’t about being proud of an achievement, it was because she understood that I heard her and I took to heart what she said.”

Below is some video footage of Houston’s performance with Price on Thursday night: