“American Idol” alum and “Dancing With The Stars” favorite Kellie Pickler received the surprise of a lifetime on Friday night when her drummer Gregg Lohman–who just two months ago was badly injured in a car accident–joined her unexpectedly onstage in Illinois.

Picker and her crew were playing in Lohman’s hometown of Effingham, and the singer knew he was in the audience with his family watching the show. What she didn’t expect, however, was to find him sitting behind the drums all ready to go for her encore of “Red High Heels.”

“I cannot even describe how beautifully overwhelming last night’s show was,” Pickler described on her Facebook account. “When I hit the stage and saw that Gregg was now sitting behind his drum set I fell to pieces…For those who do not believe in miracles, we witnessed one last night.”

Pickler’s pro partner on “Dancing With The Stars,” Derek Hough, was in the audience that night as well, and he posted some touching shots on Instagram of the surprise reunion. “Incredible moment tonight…#ihavesomethinginmyeye,” he commented. 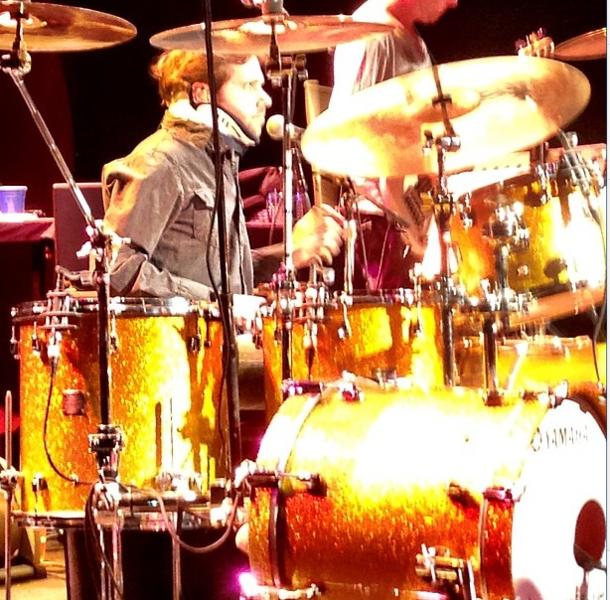 Lohman, who suffered serious head and neck injuries in a four-car pileup March 2, has been out of the hospital since mid-March–but is still recovering and undergoing physical therapy. As you can see from the photos, he wore a neck brace on stage while performing with Pickler.

Pickler and Hough won immunity this week on “DWTS,” guaranteeing progress to the next round. Pickler noted on Tuesday that she and Hough are preparing hard: “Tomorrow Derek and I start rehearsing for next week’s show. We are doing two dances Monday…the Paso Doble & Viennese Waltz!”