Kathleen Hanna, the singer-songwriter and activist behind Bikini Kill, Le Tigre and Julie Ruin, has announced a new T-shirt line called Tees4Togo. Featuring original portraits of music royalty — from Joan Jett and Carrie Brownstein to Chuck D and Grimes — all proceeds from the T-shirt line will go towards the non-profit organization Peace Sisters, which helps send young girls to school in the West African nation of Togo. The sweatshop-free T-shirts sell at $40 a piece, or the equivalent to a year’s worth of school tuition.

Hanna devised the concept after meeting Peace Sisters founder Tina Kampor. A former teacher in Togo, Kampor immigrated to Pasadena 15 years ago, where she would become a full-time registered nurse. Still, she could not forget her students back home: “[Tina] grew up there and she just saw all these girls who weren’t able to go to school,” explains Hanna. “A lot of them are orphans, or very poor. Past the fifth grade in Togo, you have to pay for [education]. She saw all these girls dropping out in the sixth grade. So when she came to California she started sending money home, then opened it up for other people to help. She’s put 130 girls through school herself and supported members of her family at the same time. I just happened to be in the right place at the right time and [said], ‘I want to be a part of this!'”

Hanna began hosting Peace Sisters’ fundraising parties in her Southern California home, and eventually raised $9000 through a GoFundMe page — over twice the amount she first set out to raise. It was then that Kampor named Hanna a Peace Sisters ambassador and began inviting her to board meetings. Meanwhile, Hanna was recovering from late-stage Lyme disease; but she says the project has helped her power through her recovery. “This has been really, really satisfying to me,” says Hanna. “It’s something that a few years ago was absolutely impossible. You never know if you could fully recover, but it is possible, and I am living proof.”

Adds Hanna: “Tina already built this thing and all I had to do was be an ally to her project. I can do something creative and have it benefit what she’s already done the legwork for.”

While plotting the T-shirt line, Hanna personally approached a laundry list of musicians, actors and comedians for help; some of whom contributed art as well. Faces featured on the tees include Hanna’s husband Adam “Ad-Rock” Horovitz, her former bandmate JD Samson, Kim Gordon, Patton Oswalt, W. Kamau Bell, Seth Bogart, Justin Vivian Bond and Kristen Schaal. “I’ve been thinking about how one of the first songs [Le Tigre] wrote was ‘Hot Topic,'” said Hanna. “It was kind of a depressing time to be a feminist, like always. So we came up with a list of people whose work we really loved at that moment, some who were not well known, and sang their praises. And it was actually really great — people started their own website that had a list of songs and information about them. The future project has been a little bit like that for me — except instead making a song, I made a business.”

This September, Hanna’s insurrectionary first band, Bikini Kill, made its entire catalog available in online streaming services. That same month, the riot grrrl forerunners also reisuued their 1998 compilation LP, The Singles. Hanna tells Rolling Stone that Bikini Kill has no plans to make new music, but she has her own plans for musical collaborations. “Savages sent me a track which I’m doing vocals over this month,” she says.

“I have some other stuff in the works,” she adds. “But I’m just keeping it close to my vest, so to speak. I’m not really wearing a vest, but if I was, it would have a pocket square.”

The T-shirts are now available for sale online at Tees4Togo.com. 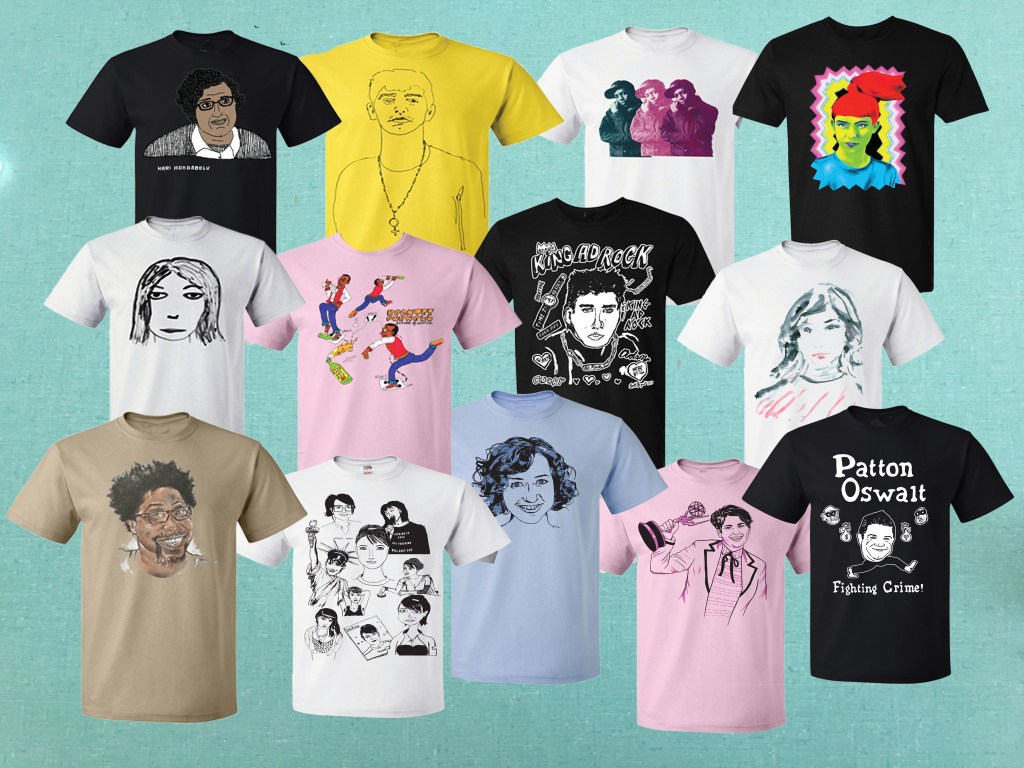