With Bikini Kill singer Kathleen Hanna set to appear at Boston’s Wilbur Theatre Thursday night for a discussion and performance, the city of Boston has declared that April 9th, 2015 will hitherto be recognized as “Riot Grrrl Day.” In a proclamation inspired by Hanna’s own “Riot Grrrl Manifesto,” Boston Mayor Martin J. Walsh writes that Riot Grrrl Day will “commemorate, celebrate and actively promote the cultural significance of riot grrrl culture, and to inspire grrrls everywhere to shake up the status quo and create.”

Hanna will receive the proclamation at her Wilbur Theatre gig tonight. The proclamation was spearheaded by Boston’s Chief of Policy Joyce Lineham, formerly a punk-rock promoter who knew Hanna from her stint as an A&R rep at Sub Pop.

“Kathleen was all about the collective, and it was a real team effort putting this together. There are a lot of Riot Grrrls in the building [at City Hall],” Lineham told Vanyaland, adding that Riot Girrrl Day “marries two of my favorite things: political activism and the arts. The idea that women and girls should have a voice and be heard is something near and dear to my heart.” (As the Guardian notes, Lineham previously led a failed campaign to make the Modern Lovers’ “Roadrunner” the official rock song of Massachusetts.)

Among the reasons listed for anointing April 9th “Riot Grrrl Day” in Boston, Walsh writes on the proclamation that “A $10 Bikini Kill record isn’t worth $7.70, and a woman today shouldn’t make 23% less than a man” and “Even in 2015, a woman cannot safely assume that her legal right to her own reproductive health will go unchallenged, and so many public and private policies continue to silence female survivors of violence. “ 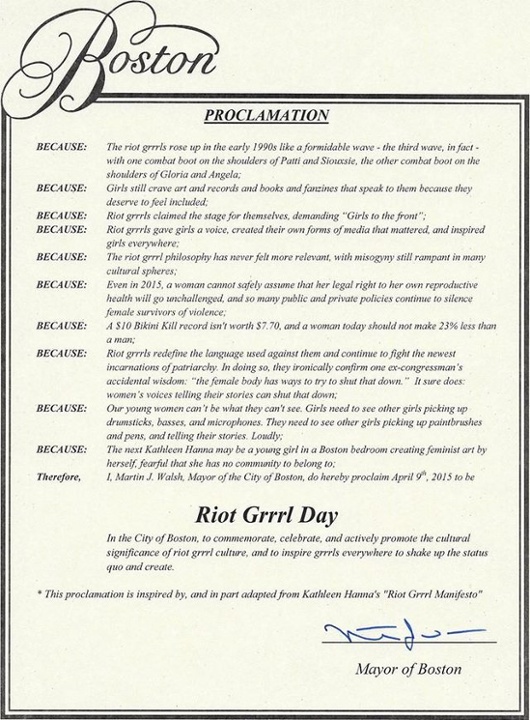