Timbaland, Avicii, Estelle, Joey Fatone, Paul McDonald and Nikki Reed were among the celebrity guests who showed up to support the United Nations Foundation’s mPowering Action platform’s pre-Grammy launch party on Friday. In addition to industry notables, the party, which took place at the Conga Room in downtown Los Angeles, brought out swarms of music fans, many of whom admitted to RSVPing after hearing rumblings of a surprise performance by Justin Timberlake.

“Buy The 20/20 Experience!” preached Timbaland as he walked down the red carpet before the event. While committed to keeping silent about the forthcoming Timberlake album, which he’s exclusively producing, Timbaland did reveal that he was excited to be an instrumental part of the project.

He also alluded to new Timbaland material being released “ASAP.” “There’s a whole bunch of stuff coming out,” the producer-rapper told Rolling Stone. “A whole bunch of stuff. You gotta wait and see.” He also mentioned that he would be attending this year’s Grammy Awards with his “best friend,” a.k.a. Timberlake.

Rolling Stone also caught up with Estelle, who squealed at the mention of the new Timberlake album, jumping up and down while declaring her love. “I hope I get to see him tonight! I cannot wait for the new album! I love him! I love him! He’s great. I think he’s amazing!” She admitted to keeping “Suit & Tie” at the top of her playlist, adding how thrilled she was to hear that Timbaland is involved with the project. “I am happy that everyone is getting back to their roots as far as music and what made them great. They are getting experimental and rediscovering the real. Justin and Tim – they do some great music. Hands down great music!”

Estelle revealed that she is nearly done with the follow-up to her 2012 release, All of Me. “It should be out later this year. I’m trying to beat out my singles right now,” she said. “My work is evolving. I hate to do records that sound the same. There is never going to be another ‘American Boy.’ There is never going to be another ‘Thank You.’ Where I am right now is back in the field. The last album was a breakup album. This album is called Love and Happiness and it’s going to be one of the records that shows me getting back out there trying to date and believe in love again. It’s hard,” she joked.

Timberlake’s former ‘N Sync colleague, Joey Fatone, told Rolling Stone that the fans’ dreams of him getting back into the boy band world anytime soon are far fetched. “It would be fun to do though – like going back to high school for a reunion. It would be that kind of feeling.” Fatone chimed in on the Timberlake carpet chatter, telling Rolling Stone that JT’s solo project gets his official stamp of approval.

“I enjoy his stuff,” Fatone said. “It’s funny because some of the stuff that he wrote for N’Sync for the group – Jay Z wrote stuff and so did Justin – it’s very similar as far as the feel and the vibe on a lot of his solo stuff. I haven’t heard the new album yet – only ‘Suit & Tie’ – but I definitely dig the vibe.”

Inside the Conga Room, guests took advantage of an open bar as UN Youth and Girl Up Champion Monique Coleman walked them through the positive doings of mPowering Action. Timbaland and his wife, Monique Idlett, took the stage to discuss donating to the charity, urging the crowd to quiet down and absorb the message. “We can get to the music as soon as you all let me get through my speech,” warned Idlett. 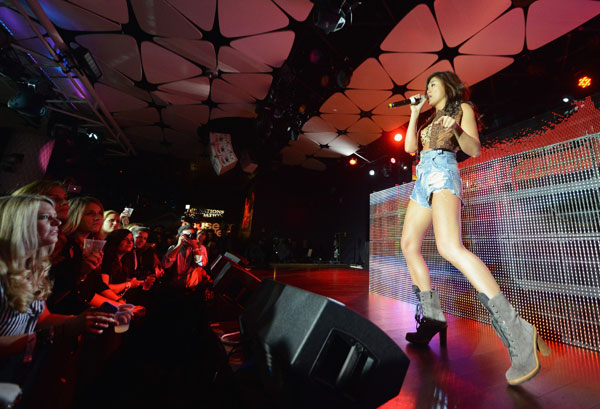 Around 10 p.m., the evening’s musical agenda kicked off with Agnes Monica, who performed her Timbaland-produced track, “Show A Little Love,” and launched into a choreographed routine with backup dancers. Timbaland then flashed his grills, took off his jacket and grabbed a microphone. The super-producer instructed the crowd to raise their hands and seconds later, a plethora of cheers confirmed the appearance of Timberlake on stage. Clad in a suit jacket, a black beanie and khakis, Timberlake hopped around the stage, sharing vocals with Timbaland on “Carry Out” and holding out the microphone to let the audience fill in occasional lines. Timbaland’s DJ cut the track and Timberlake ended the song with an a cappella “Turn me on now baby, don’t you cut me out.” As he finished, he addressed the crowd: “Yeah! We’ll see you all Sunday. Thank you L.A.” He instructed attendees to cheer for his “big brother Tim” before walking off the stage, leaving everyone in house – especially those unable to score tickets to his Grammy night show at the Palladium – wanting more.

Timbaland then performed “Promiscuous Girl,” which was followed by several tunes by Estelle. Grammy-nominated Avicii brought the final hour to a close with an energetic DJ set.