Walking into the lobby of New York’s Irving Plaza for Juicy J’s show, one must be sure not to step on the outstretched feet of kids, their faces half-lidded and sweaty, mouths slack. It’s hard to tell through the smoke, but they’re smooth-faced boys, all of them; It’s a 16+ show, younger if accompanied by an adult. Someone mutters something about Max B. It’s hard to hear what exactly, since it’s loud but also because the kid’s face is practically kissing the floor.

Juicy J hits the stage after A$AP Ferg’s opening set, coming out to chants of “yeah, hoe,” the underbelly of 2011’s “Bombay Gin Dance.” Lex Luger’s production, as always, is filled with stutter snares, lightning bolts and thunderclaps. The room shakes like a snow globe, swirling and undulating, fast and in waves. At 38, the Three 6 Mafia co-founder is as unlikely a pop star as 2 Chainz or PSY; he dances onstage like one rows a boat, often swinging his arms as if surrounded by gnats. But due to hard work, nostalgia, irony and coincidence, somehow he has a bio page on Z100’s website. 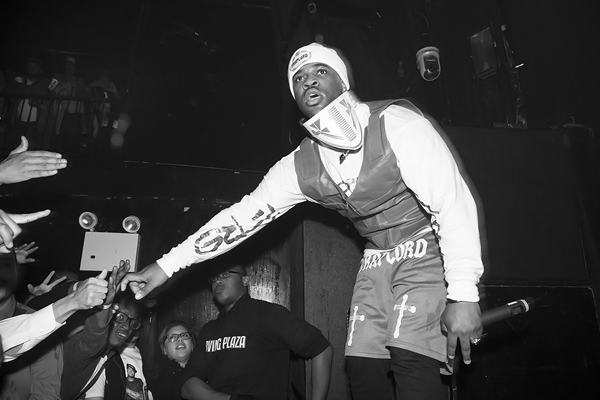 Largely forgotten after he’d won an Oscar and gone Hollywood for MTV, Juicy reemerged by starting back at zero and making music that sounds best in frat basements. At Irving Plaza, he shouts out those who “smoke and smoke until six in the morning and then play PS3 and then they play Xbox.” His songs – all of them, but especially those made since 2009 – are simple and catchy, built to make drugs, sex and violence as appealing as bubble-gum. He’s as much a rapper as he is a pharmacist and eighth-grade health teacher: at different points, he yells out paeans to bars of Xanax, weed, codeine and MDMA. (Time will tell, but he just might be this generation’s Joe Camel or Keith Richards.) Rihanna’s in the house, naturally, in VIP. A Juicy J concert is like church for all things sacrilegious.

Not long after the show starts, Juicy crowns himself “the king of ratchet pussy,” requesting “two ladies get onstage and kiss.” After Juicy threatens to check IDs, only one girl accepts the offer; she dances a bit until a teenage-looking guy bounds onstage, tries to grind on her and gets rejected. It’s a brief snap back to reality from the consequence-free fantasia we’re all living in. Not much later on, Juicy asks for a woman to come and join him onstage as he performs “One of Those Nights,” his collaboration with The Weeknd. Finally, a fan named Theresa steps forward, long-haired and curvy in a tight dress. The two spin slow and awkwardly, as if dancing in a middle-school cafeteria. They keep spinning, spinning. Now they’re making out, for a long while, his hands under her back. The instrumental keeps playing until at last he breaks off, half-heartedly running through the motions of performing; Theresa walks offstage. Juicy yells after her, “Can someone get her number for me? My dick was jumping around like a motherfucker.” Cheers go up; love found in a hopeless place. 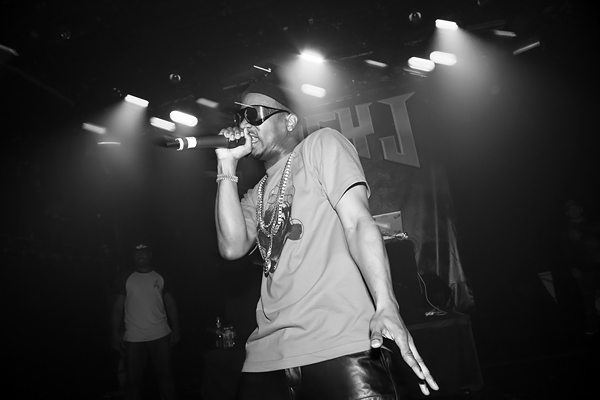 The low point – in a night of highs, recreational and performance-wise – comes when Juicy calls up a bunch of people to try and rap. The first person handed the microphone is a shirtless white guy, Will from Westchester. Juicy asks him if he’s a wrestler, and he says no. Perhaps bolstered by drinks or drugs or the idea of being so close to a major artist, Will begins his freestyle – over Drake’s “Started from the Bottom” – by shouting out his “main n***a Juicy.” A few boos seem to be scattered around the room, but not that many. Soon after, maybe sensing just how bad an idea it is to give a platform to just anyone, the others are wordlessly escorted offstage. It’s too bad that no one says anything about Will’s casual slur. But in a place where few laws, if any, seem to exist, maybe there’s no room for outrage.