“I’ve spent many, many months dreaming of this night,” said John Mayer, addressing the Summerfest crowd moments before closing out his momentous tour-opening show on Saturday evening at Milwaukee’s Marcus Amphitheatre. “It’s a long time coming.”

Mayer’s palpable joy was no surprise: Not only was Saturday the first stop on the guitarist’s “Born and Raised” tour, but save for one-off festival appearances and a pair of Philadelphia dress-rehearsal shows last week, it marked the first time he’s taken the stage for a proper headlining show since doctors successfully repaired a granuloma in his throat last August.

To that end, Mayer’s voice was the elephant in the room all evening. The singer has taken many songs down into a noticeably lower vocal register – a change-up most noticeable on “Waiting on the World to Change,”  during which he forwent all of his falsetto parts. But on the whole the singer’s voice sounded strong and confident. (A vocal-cord lubricating throat spray he self-administered between songs also likely aided in his success.) Mayer made mention of his surgery only once – albeit in quite a deliberate fashion – referencing his former girlfriend Katy Perry, and noting how the pop star ordered food for him when he couldn’t speak. “She was so patient,” he said, adding that she took the time “to continue to get to know me and love me” despite his vocal impairment. He then dedicated the evening’s final song, “A Face To Call Home” to “Katy, who is my face to call home.” 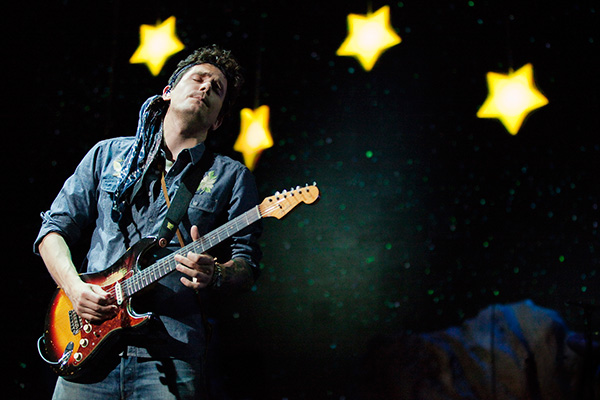 Despite being away from the stage for nearly two years, Mayer has been far from stagnant: after holing up in rural Montana he released the country-inflected Born and Raised last spring – an album he told Rolling Stone was his “most significant, meaningful record” – then quickly returned to the studio in Los Angeles where he’s been busy in recent months piecing together his forthcoming new album, Paradise Valley (due August 13th).

Saturday gave the guitarist ample opportunity to woodshed his new material, in addition to performing a large portion of Born and Raised, even debuting the album’s slow-grooving title track. With the help of a seven-piece backing band, Mayer unveiled four brand-new songs. All of which were inflected with a decidedly back-porch lilt: during “Paper Doll,” the first single off the new album, Mayer swayed in a low-crouching stance, picking selective notes during the tune’s tasteful mid-section guitar solo; “Waiting on the Day” and “Dear Marie” were both of the CSNY-ish acoustic variety, the former with Mayer looking to the future (“waiting on the day/when my words are in stone/ when the kids are all grown/ we go dancing”) and the latter with him stuck in the finicky present (“I wonder what you think when you see me in the magazine”); his cover of Bob Dylan‘s “I Want You” was more up-tempo and foot-stomping than the original, infected with a bluegrass twang.

It was “Wildfire”, though, sonically not dissimilar to Born and Raised‘s Laurel Canyon-aiming “Queen of California” and which Mayer revealed as the opening song on Paradise Valley, that was the highlight among the new cuts. “You can drive with your headlights out/put your feet up next to mine/you and me been catching on like wildfire.”

The musician’s newfound obsession with open-range living extends beyond his new material: There was the desert-and-canyon visual backdrop that gave the audience a feeling of sitting around a campfire; the singer sported denim-on-denim duds, complete with a bandana and a leather knapsack thrown over his shoulder; even his older material, including a “refurbished” “Half of my Heart” and “Who Says”, were spiced with a dash of backwoods flair. 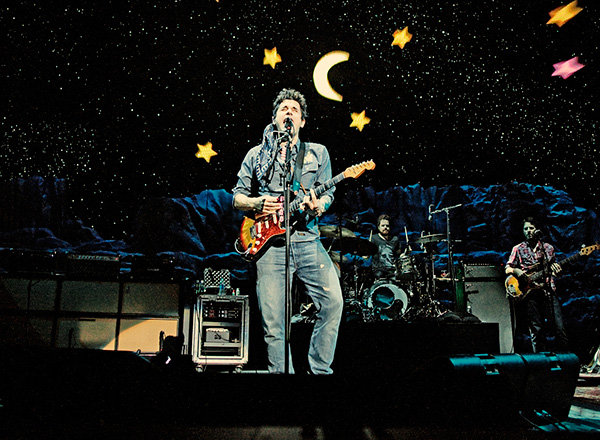 Mayer’s guitarist gymnastics, per usual, took center stage: He shined not only on his more bluesy Continuum-era fare (“I Don’t Trust Myself With Loving You,” “Gravity”) but also the newer material where his selective-note soloing sounded reminiscent of Jerry Garcia, particularly on “Waiting on the Day” and the oft-covered-by-the-Dead American traditional “Goin’ Down the Road Feelin’ Bad.” (Earlier this year Mayer revealed to Rolling Stone that he’s recently become enamored with the Grateful Dead.)

Saturday’s show may be remembered for its heavy dose of new material and Mayer’s vocal rejuvenation. But in the moment it felt most special because the formerly exiled singer looked thrilled to be back.

“How ya’ll feeling?” he asked the crowd early on. They responded with fittingly rapturous applause. Mayer flashed a winning smile, and replied with nary a hint of his trademark deadpan: “I’m feeling the same way.”