A letter that John Lennon wrote to producer Phil Spector blaming Who drummer Keith Moon and singer-songwriter Harry Nilsson for urinating on a recording console in the Seventies is going up for auction, via auctioneer Cooper Owen. Dubbed by Lennon “A Matter of Pee,” the missive minces no words and shows the former Beatle‘s discontent with the recording studio that wanted to evict him over the matter. It dates back to Lennon’s “Lost Weekend” period, a debaucherous 18-month stretch in which he dated his assistant May Pang outside of his marriage with Yoko Ono, worked on 1975’s “oldies” record Rock ‘n’ Roll and produced Nilsson’s Pussy Cats record. Moon contributed drums and percussion to the latter record, which came out in 1974.

“Should you not yet know, it was Harry and Keith who pissed on the console!” Lennon wrote in the exclamation point–laden letter. Later in the note, he added, “I can’t be expected to mind adult rock stars nor can May, besides she works for me, not A+M! I’m about to piss off to [recording studio] Record Plant because of this crap!” 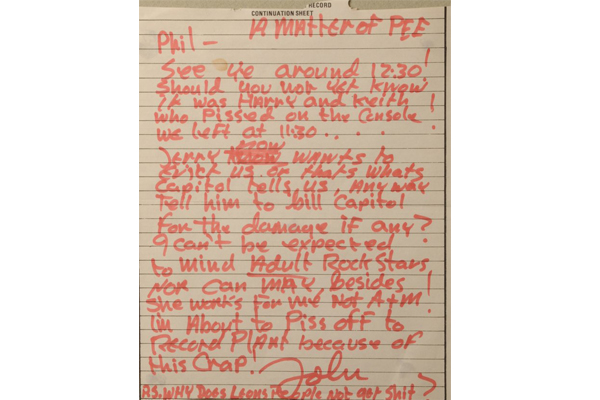 Lennon later gifted the letter to guitarist Jesse Ed Davis, who played on Pussy Cats, Rock ‘n’ Roll and Lennon’s 1974 album Walls and Bridges. It is expected to fetch between $6,600 and $9,900 in the auction. Davis’ estate is also auctioning four drawings Lennon gave him, including a self-portrait with Davis and Nilsson, a sumi ink depiction of a man meditating, a landscape full of mountains and puns and an acetate sleeve with a UFO, a yin-yang and the words “Walls and Bridges.” Bidding begins on all auctions on Friday.

Both Moon and Nilsson had reputations for riotous behavior. Moon was known for blowing up toilets and imbibing copious substances (after accidentally ingesting an elephant tranquilizer once, the drummer spent days paralyzed), and Nilsson was once ejected from the L.A. club the Troubadour with Lennon after the pair heckled the Smothers Brothers. In 1978, Moon died in Nilsson’s flat after overdosing on a sedative his doctor had prescribed him to prevent seizures induced by withdrawing from alcohol.

“This is a rare note in that it mentions so many well-known figures from the era,” auctioneer Louis Cooper told the U.K.’s Telegraph. “Clearly John Lennon is blaming Keith and Harry for urinating on the console, and he also announces that he is about to leave the record company. . . In it, he seems quite irritated.”