As ominous blue lights darted through the expanses of Louisville’s ornate Brown Theatre, Jim James and his four-piece band strode onstage to a murky synth drone. James, dressed in a dapper chocolate-brown suit, carried the awkward glow of a man picking up his prom date 15 years too late.

He smiled giddily, bowing in a silent “Namaste” pose as he surveyed the sold-out crowd, his bandmates nestling into the psychedelic grooves of “State of the Art (A.E.I.O.U.),” the opening track from his solo debut, Regions of Light and Sound of God. Leading a spirited crowd chant, James glided across the stage like a clumsy white version of James Brown, as the track spiraled to a dizzying guitar solo climax.

It was a mesmerizing start to a criticial show. Both the kickoff date for his first solo tour and a homecoming gig for a proud Louisville native, the evening was an artful celebration of the My Morning Jacket frontman’s singular mystique.

The set list was split into two distinct halves: first, the tight-knit quintet (including keyboardist/guitarist Kevin Ratterman and drummer Dave Givan, James’ childhood friend and former bandmate) ran through Regions of Light sequentially, in its entirety. That was followed by a potpourri mini-set that surveyed the rest of James’ career – a couple tracks from his main band and a handful from his assorted collaborations (including the quasi-indie-supergroup Monsters of Folk). Unless you actually sit down and analyze the sprawl, it’s easy to get lost in just how eclectic his music truly is, ranging from big-reverb Southern rock to freaky art-funk to emotive acoustic balladry.

But that unpredictability is part of what makes James so fascinatingly brilliant. And he’s equally absurd as a stage presence: part hippie camp counselor, part hard-rock god, part nerdy youth pastor. He rips a guitar solo like a metal dude, frequently sings in a cartoonish R&B falsetto, curses like a sailor and offers a sincere “God bless you” after every other sentence. And James’ larger-than-life musical personality is mirrored in the myriad faces at his shows: ditzy sorority girls, drunk frat boys, folded-arm hipsters, middle-aged record junkies. These people worship James with a reverence reserved for only the greatest of rock stars, belting along with every extended vocal blast, giggling at all of his goofy stage tics (the big-hair swirls of headbanging, the lovably corny hand jives). For these folks, the Jim James experience is a rite of passage: Before the show, outside in the Will Call line, one bearded hipster passed around a communal brown bag of backwashed booze like church communion. 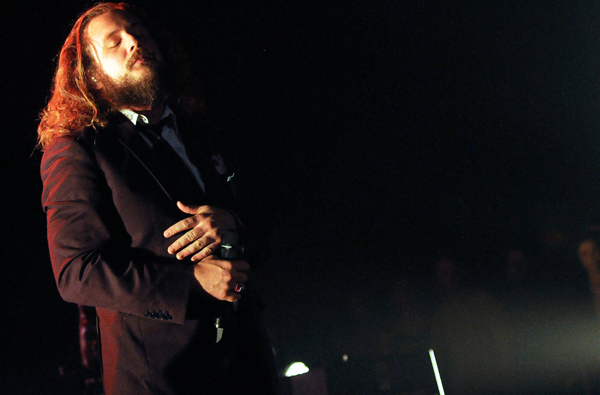 On record, James is one of rock music’s most powerful singers and one of its most fearless sonic architects. But his songs with My Morning Jacket tend to bloom even more masterfully onstage, his band adding elastic solos and propulsive energy. Unsurprisingly, Regions of Light (recorded and played mostly by James himself) was transformed into something far more visceral and majestic. Givan’s Bonham-esque pounding brought out the hip-hop heart in “Know Til Now”; the soulful “Of the Mother Again” was extended into a jazzy workout. On album, “God’s Love to Deliver” is a concise, acoustic-based meditation on human equality; onstage, it became a chaotic behemoth, climaxing with 10 minutes of crawling grooves and distorted guitar seizures, with James offering one of several unexpected sax solos.

One of the evening’s most arresting moments came toward the end of the first set. “All Is Forgiven” was an eerie art-rock exorcism, ending in a glitchy electronic spasm. Another came during the second set, just before the electro-soul sprawl of “Dear God.” After engaging in some hometown banter about the city’s recent NCAA tournament basketball win (“Flyin’ high after a sweet fuckin’ victory from the Cards!”), he called to mind the tragic bombings at this week’s Boston Marathon, leading the crowd in a chilling moment of silence.

“God bless you all,” James shouted moments later, basking in the radiance. “Spread the love, live the love!” In typical Jim James style, that mission was very much accomplished.