Jay-Z’s eight-night stand at Brooklyn’s new Barclays Center in September was historic and a feat few of his contemporaries could pull off. So it was fitting that the experience would warrant its own documentary, “Where I’m From,” that debuted on Jay-Z’s Times+Life website Tuesday, the hip-hop mogul’s 43rd birthday.

But there’s a breakout star in the 24-minute video: Brooklyn artist Ellen Grossman.

“Where I’m From” captures Jay-Z taking the subway to his last night at the 18,000-seat arena. Jay sits next to the unassuming 67-year-old woman and makes conversation.

Grossman has a sense that Jay may be a person of note and asks if he is famous. First he says yes, and then he adds, “Not very famous, you don’t know me. But I’ll get there someday.” 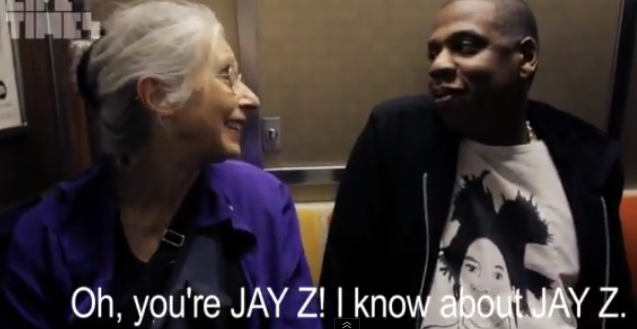 Jay humbly introduces himself, extending his hand, and asks her name.  She replies, “Ellen” and asks what he does for a living.

When Jay tells her that he makes music, she asks if he just performed. “I’m on my way to a performance at the new Brooklyn arena,” he says.

“Already?” she responds with surprise.

“This is the last show, the eighth show,” he continues.

“And you’re going by subway?” she asks, seeming impressed.

“I’m proud of you,” she says, complimenting him.

Then she asks him to repeat his name “just so I get it.”

The documentary video is going viral, with more than 150,000 views so far. And viewers are swooning over the banter between Grossman and Jay-Z on the subway. One person tweeted, “OK. This is the cutest thing ever.” Another person wrote, “nice to see Jay-Z be a little humble every once and a while.”