So many shoes laid abandoned and submerged in the calf-deep mud at the Governors Ball on Manhattan’s Randall’s Island on Friday. They were symbols of exasperation, of concession to the brutality of nature – or, if the previous owners were some of the more fortunate attendees, they were merely casualties of the forcefully sought drunken stupor requisite to making the entire day tolerable.

Everyone left the opening day of the music festival deprived of something: warmth, health, the chance to fall into Kings of Leon‘s dreamy eyes. The newly expanded three-day festival, held at the normally bucolic Randall’s Island Park, was plagued by steady rain from the moment its gates opened; this wasn’t problematic at first, as more cautious attendees sported rain boots and sloshed amiably through the slowly accumulating mud puddles, and the more laissez-faire in the crowd cast off their flip-flops and Converse, returning the materials to nature and delighting loudly as they squished barefoot across the clammy grounds.

But the novelty wore off as the flood warnings came in. By 4 p.m., the rain was torrential. By 8, it was biblical, and dirty water was rising a good six inches off the destroyed field. An hour later, headliners Kings of Leon and Pretty Lights couldn’t take the stage due to the unsafe conditions, and the scant attendees left shivering and bone-soaked under awnings fled to the back-logged ferries or trekked miserably across various bridges to bright boroughs that promised power and heat.

Still, the performers at Governors Ball displayed enthusiasm and resiliency to combat the backhand from nature. Totally Enormous Extinct Dinosaurs, the heavy house and U.K. Garage project of English DJ Orlando Higginbottom, offered quick solace from the elements in a frantic mid-afternoon tent set; he liberally threw out peppy crowd-pleasers from his 2012 debut Trouble, including the singles “Tapes and Money” and “You Need Me On My Own.” Over at the mainstage, before the exposed space was shuttered, Icelandic upstarts Of Monsters and Men warned their viewers that they were “better off” at home if their souls weren’t warmed by the band’s folk-pop charms, but their offerings revealed themselves curiously; the band’s stage show was heavier and more aggressive than their winsome, Saturday Night Live-approved breakthrough single “Little Talks.” Their increasingly sparse crowd did, indeed, appear cheered.

Crystal Castles remained energetic in the storm. Neon-coiffed singer Alice Glass darted to and fro, slipping slightly on the sodden stage as she howled through “Crimewave” and “Sad Eyes.” Surmising the shivering crowd, she threw herself forth for body warmth, clambering onto their shoulders. Local Natives proved less energized combatants to the rain, though their set on the fantastically named You’re Doing Great Stage came in a rare lull of the rain. The L.A. indie rockers seemed to mourn the missing sun openly as they mewled through “Heavy Feet” and other offerings from January’s Hummingbird, their pace trawling to a near-standstill at times in interludes that could have been gorgeous in better climates, but were leadening on Randall’s Island.

Soon after, Feist gave it a gracious go on the main stage, for which she was rewarded with facefuls of rain in a windy, near-horizontal assault. Thanking her fans profusely, she lasted through a single song before organizers ushered her and her band offstage and announced to the sea of ponchos below that she would not continue. 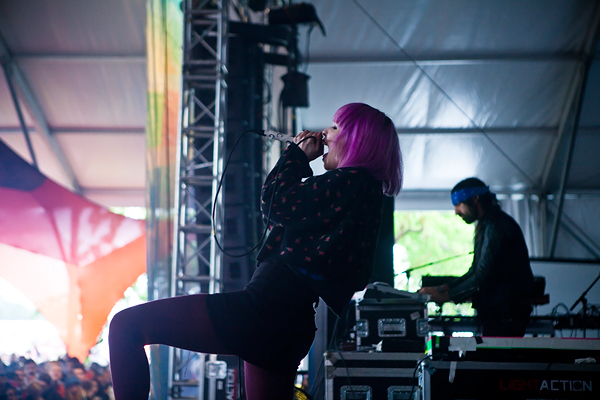 Erykah Badu fared better: off in the only enclosed tent, she delivered an ethereal set that rose above the elements, crooning her intelligent neo-soul with warmth and serenity. Opening with “The Healer,” her delightfully strange credo to hip-hop from 2008’s New Amerykah Part One (4th World War), she called for peace and love from the soggy room and chirped “I love this rain,” dancing with her band the Cannabinoids through pleasing, provocative throwbacks from her groundbreaking 1997 debut Badiuzm, including “On and On” and “Otherside of the Game.” It was a tremendous set, and after it came the unceremonious end of the day – festivalgoers huddled in clusters waiting for the announcement that Kings of Leon and Pretty Lights were canceled, and the exodus home began.

Saturday
Spirits were considerably higher on the second day of Governors Ball, which stayed free of rain but was marred by mud. It festered across the grounds, half a foot deep, with quicksand suction. This deterred no one at Icona Pop’s early afternoon set: fans of the Swedish singer-DJs piled directly into the largest puddles of their covered tent, flinging balloons into the air as the pair powered through their electropop. Launching into “Manners” and its valiant chorus of “There is no one like me,” they dropped surprisingly heavy hooks with dubstep’s theatricality, the photogenic bandmates Caroline Hjelt and Aino Jawo pinwheeling around the stage in futuristic metallic jackets and racy sheer tops. By the time they phased out with their rapturous hit anthem “I Love It,” the crowd had doubled and was putty in their hands.

Japandroids took a more insolent route over on the main stage, with singer Brian King launching into a deadpan endorsement to buy their (genuinely terrific) latest garage-punk album, Celebration Rock, at all quality local record merchants, then spin into the garrulous “The Nights of Wine and Roses” from that record. From there, they introduced themselves as Guns N’ Roses (while conspicuously lacking the double-necked guitars and red bandannas) and played a few squalid more tracks from the disc.

They were as inversely, merrily ludicrous as their mainstage successors, Divine Fits, were earnest. The recently formed troupe of indie-rock notables – Britt Daniel of Spoon, Dan Boeckner of Handsome Furs/Wolf Parade, Sam Brown of New Bomb Turks and relative newcomer Alex Fischel – culled from their 2012 debut A Thing Called the Divine Fits with all the ease of their collective years on niche-rock stages, delivering one of the day’s highlight sets. Boeckner commanded vocals early on “Baby Get Worse,” two-stepping with his emo bangs akimbo as Daniels (the musician with by far the most mainstream success in the quartet) smiled contentedly on the side, jabbing at his guitar. Synth chords piped in with all the surfeit drama of an Eighties teen movie soundtrack. Daniel’s tetchy, raspy frontman charisma eventually served the group well on “Would That Not Be Nice” and a drawling cover of Frank Ocean’s “Lost,” including his oddly transfixing bark of “Miami, Amsterdam!” on the refrain. 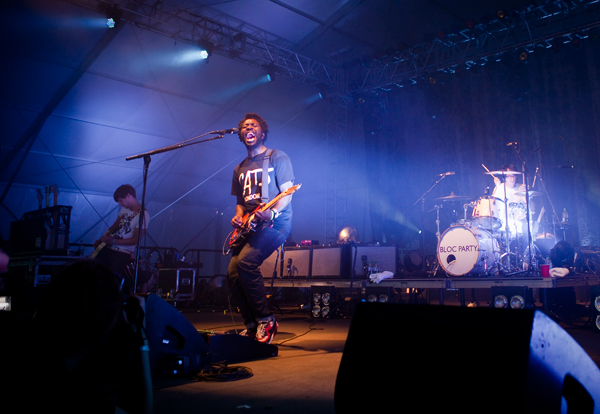 Hot-to-trot English art-rockers Alt-J brought the pace down considerably across the field. Their record An Awesome Wave is an intricate, tightly wrought debut with many moments of brilliance (winner of the prestigious Mercury Prize across the pond), but those did not translate in the bright afternoon glare. The sinewy elements inside their mathematical progressions felt sluggish onstage. Singer Joe Newman sounded breathless, too, especially on the album standout “Breezeblocks,” dripping the remaining propulsion from their slow set.

They should have pumped some Azealia Banks before storming their stage. Nearby in the covered tent, the fast-ascendant rapper was absolute dynamite, sporting a dramatic Day-Glo orange bodysuit and presiding over a whirling stage crew – two backup dancers and the DJ Cosmo – with nary a bead of sweat visible. She crowed that she was ready to unleash her favorite song she’s written, the flashy hip-house autobiography “1991” (from her debut EP of same name), and spit through it with rapid precision, then cut through a few offerings from her “Fantasea” mixtape, including the Hudson Mohawke-produced “Jumanji.” The she bounced into a hard-as-nails take on “Harlem Shake.” Of the well-publicized friction that erupted between her and Baauer after her remix she noted, “I got in a lot of trouble . . . but I’m from Harlem!”

Banks was a much-needed shot of adrenaline before Animal Collective’s technologically plagued set. After a caterwauling and psychedelic start, they were forced to end early because of equipment problems, making way for Saturday night’s double dose of headlining sets – Kings of Leon’s scrambled daylight affair and Guns N’ Roses arsenal of radio ragers.

Sunday
Clear skies and a vastly improved ferry system from Friday launched the concluding day of Governors Ball on an optimistic note. (Never have East Coast festivalgoers made so much emphatic discussion over weather. Above curiosity for Kanye, this was the tie that bound.)

Cold War Kids strode out into the sizzling afternoon, realized they were wearing about four too many layers and stripped down in between breathy but bland spins through the staccato piano-heavy new track “Miracle Mile” (from the new album Dear Miss Lonelyhearts) and the bluesy fan favorite “Hang Me Up to Dry.”

They went a good stretch over their strictly regulated closing time, leaving their successors, Deerhunter, standing awkwardly and mutely on their own platform across the field. However, this just gave the loquacious singer Bradford Cox a few more minutes to ready his stage banter. Once unbridled, he was off like a shot: “I wonder what kind of bacteria is on this island!” he chirped with typical stream-of-consciousness glee at the barefoot bohemians below him. Noting the use of oil to power amplifiers and lights, he added, “Oil is made out of our dead ancestors,” hit a power chord, and concluded helpfully, “Your dead ancestors made that sound!” Somehow, this was even less interesting than the experimental rockers’ set, which pulled strongly from their sublime recent Monomania.

On the mainstage across the grounds, Foals kept up this energy with frenetic punk rock of scaly textures and shrill volume. Their closer “Two Steps, Twice” was rewardingly labyrinthine.

Yeasayer pushed the outer limits of their tribal influences, and sounded fantastic in it. “Madder Red” (from 2010’s Odd Blood) was an ebullient highlight, adding to the festive buzz of their whirling dancers. Tropicalia dominated their live percussion, a smart stage move for a band whose lyrics are often so solipsistic and dire.

They were worlds away from Grizzly Bear, who held down the mainstage across the muddy expanse. They bled out their indie-pop momentum slowly in the soft synths and somber waltz pace of “Sleeping Ute,” but also bolstered it occasionally into surprising, hard attacks. Their biggest crossover hit, “Two Weeks” (from 2009’s breakthrough, Veckatimest) maintained the angelic, keening harmonies but bared new, My Morning Jacket-style psychedelic teeth.

Bloc Party closed the tent with a strong stab of their angular art-punk. Their 2005 debut Silent Alarm still holds up, and they were wise to splice it into their set list. The achingly romantic singer Kele Okereke crooned through “So Here We Are” and then ratcheted up to the scabrous, high-octane gripes of “Positive Tension.” By the time they cut into their self-professed ode to Adderall, “Team A” (from Four, their solid return to form last year), they had sizeably amped up the bedraggled crowd – who had only to cross the field to be brought down utterly by the xx’s competing set, which was technically solid and moonily beautiful but entirely mismatched to the exhausted audience’s pervasive air of apathy.

Not even the moderately energized speed of “Crystallized” could cut the downward slope. What the crowd really needed to revive themselves was a righteous, glorious shot of egomania and verbose vulnerability from a certifiably unbalanced hip-hop star. How convenient that they should receive one from Kanye West, and leave this uneven weekend of punishing elements and stellar musicality on a top-notch high note.