This story originally appeared in the August 10th, 1970 issue of Rolling Stone.

LOUISVILLE, Kentucky — Janis Joplin and her newly formed band, Janis Joplin Full-Tilt Boogie, debuted here June 12th, their first gig since they started rehearsing together a month and a half ago. Freedom Hall, where the concert took place, is a monster indoor stadium designed for wrestling matches and basketball games, the kind of place that looks empty even when it’s full to capacity. With an audience of about 4000, it looked pretty sad. To make matters worse, the crowd, mostly younger kids in neat hippy/mod threads, did not look like Janis’ crowd.

From the air, Louisville is like a letter dropped from a giant alphabet, a T extending its arms nine miles along the Ohio river and its tail curling up into the hills. Aside from its topographic eccentricity, Louisville is really unexceptional. Downtown is a honky tonk, straggling, punky main street, where soldiers drift in from surrounding barracks looking for action and kids hang out on the corner.

Janis took a peek between the curtains before going on and realized it was not exactly Angels’ Night at the Avalon Ballroom. “Shit, man, why do those country club chicks in their panty girdles always have to be sitting in the front rows? They are probably so tight they couldn’t move if they wanted to,” said Janis in her gin-mama voice.

100 Greatest Singers of All Time 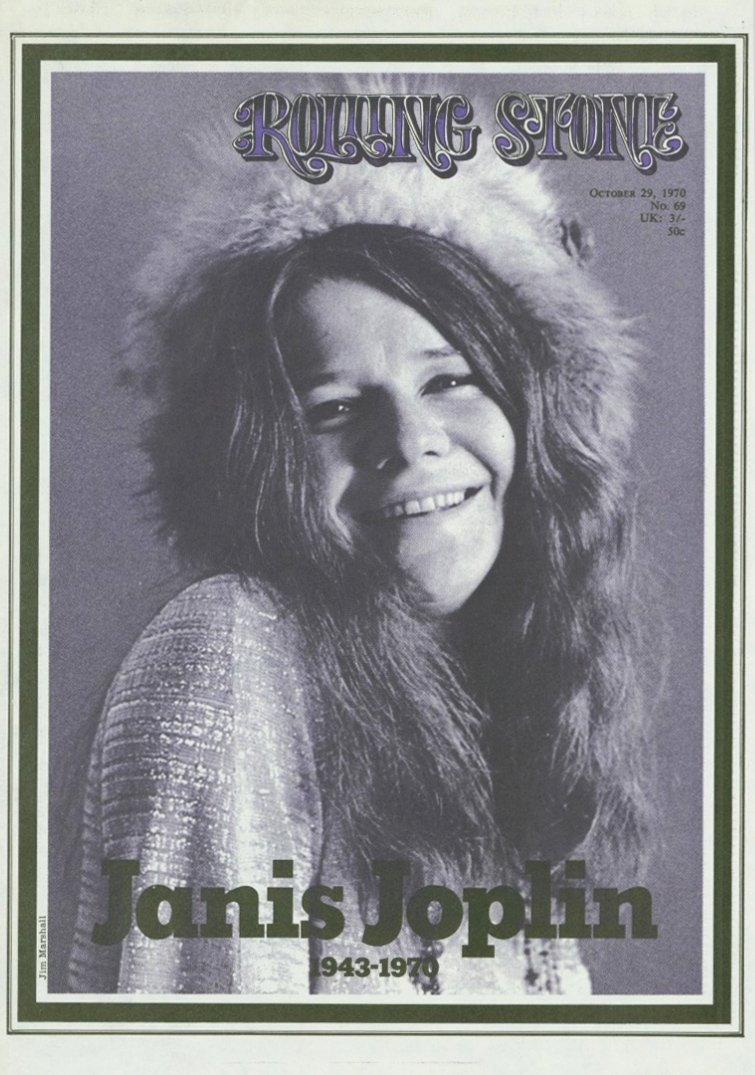 It took a while for the audience to get into it, but Janis was having her party, and she was just waiting for them to come over.

“Try Just a Little Bit Harder,” a girl shouted out as a request, and Janis yelled back, “I beg your pardon, I’m doing my part, honey.”

If things started slowly, the concert ended in a near-riot, and the rent-a-cops in their mountie hats, not sure whether they were at a concert or a demonstration, blew their cool and began driving back the kids rushing the stage with their clubs and flashlights. Meanwhile Janis was ecstatic.

“I permit them to dance,” she yelled to a burly sergeant-at-arms, “in fact, I demand it!” And the rent-a-cap marched up and down scowling and fuming and shaking his fist at Janis in a gesture of revenge, and for a minute it looked like one of those movies about small southern towns where the good hearted rainmaker gets run out of town on the next train. But, in fact, everybody had a good time except the rent-a-cops, who couldn’t figure out what role to play and ended up overacting.

It all started when Janis began to get into “Try,” with her jive about, “Honey, if you’ve had your eye on a piece of talent and that chick down the road has been getting all the action, then you know what you gotta do …” and wham! the drum kicks into the song, and Janis lays on her message: “Try a little bit harder.”

As she got into it, she jumped off the stage, and a kid in the front row started shaking it down with her. That was all that was needed. Everybody got out, onto, and over their chairs and stayed dancing, shouting and clapping.

From there things just kept grinding on with “Summertime,” “Kozmic Blues” and “Move Over,” a blues Janis has written for her next album. By the time she got into her last number, “Piece of My Heart,” security had all the house lights turned on in the hope that it would cool everybody out, but it had just the opposite effect. The kids saw that everybody was standing, dancing up and down and screaming, and it just made them wilder and eventually the whole audience swarmed up to the stage like a hive of bees.

In this conservative southern town, it was as if Janis had flashed a vision of the Garden of Eden at them. And they didn’t want it to end.

They were grateful to Janis for taking them away from where they were and putting their heads somewhere else, and they showed it. Janis was exhausted but excited; the rain dance had worked. As Janis and the band left the stage in the eternal rock pantomine of unplugging guitars, the crowd howled for more.

Janis, beaming, took another sip of Southern Comfort from a styrofoam cup and hit into the encore, “Get It While You Can,” a blues written by Jerry Ragovoy (who also wrote “Piece Of My Heart”) which Janis has recorded for her next album. As she stepped off the stage a longhaired kid in a headband handed Janis a telegram: “Come to Ripple Southern Comfort Party in Your Honor …”

The local papers the next day were as ecstatic about the concert as the audience, the Louisville Times called it a “love feast,” and the Courier Journal, in its article titled “Rock Queen Blasts Off Like An Apollo Rocket,” launched into some classic pyrotechnic journalism: “Like an Apollo rocket blasting off that’s the power of Janis Joplin’s voice. Howling, screeching, and penetrating the air with such brilliance and force, you believe for a moment she could fill the Grand Canyon with sound.”

The success of the concert can in part be attributed to Janis’ new backup group, which has finally given her the confidence she needs to put out.

“Basically, we are like studio musicians who were put together for a session,” Ken Pearson, the organist, explained. “It’s not like we played together in the garage for three years before making it. We are still finding out what kind of music we like. I’ll go up to John’s room, and he’ll play me something and I’ll say, ‘you mean, you like that?’ You know, we’re just a group of musicians, from really different backgrounds, thrown together, slowly becoming a family.”

Ken himself has worked with a lot of small rock and jazz bands in Canada. He backed up folk singer Ronny Abramson and played with Penny Lang’s Montreal Symphony 1500 before joining Jesse Winchester about a year ago as a piano player. Jesse had come North to avoid the draft and had planned to head west with his four-man band in an old bus, just stopping and doing a number wherever they happened to be, when Robbie Robertson offered to record him. Robbie had got together a bass player and a drummer for the session, but still needed a keyboard, so Jesse and Ken were the only members of the original group to play on the album. Ken would probably have stayed with Jesse’s band, but, when Jesse was billed to play a gig last February with the Band, Jesse felt his group would provide a better contrast to the Band’s full sound if he played just with himself and a bass player. So Ken was temporarily out of a job. It was just at this time that Janis was looking to form a new backup group.

Although Janis has said that one of the reasons she left her last group was that she was always fighting the volume of the horns, she misses the punch that the horns gave her. “They gave me that umph when I needed it.” But it’s unlikely that her audience will miss them. The lead guitar and organ fill in beautifully where the horn lines were, and they are a better harmonic match for her voice.

When Janis left Big Brother, it was like a marriage that broke up, and ever since she had been looking for a partner that had the virtues of spontaneity and freshness without being amateurish. Her new group comes as close to that as time will allow. If they are not quite what Big Brother was to Janis, it is perhaps because they were not part of the original Panhandle Park mythology. But, as musicians, they are more together than Big Brother. Also, Janis can relate to them: “These guys are on the same wavelength as me,” Janis says “It’s more of a family thing again.”

John Till (lead) and Brad Campbell (bass) are the only two members Janis took with her from the last band. Brad had been with the second band since the beginning, but John joined Janis toward the end, playing rhythym guitar. He is a subtle and fast blues guitarist who joined Ronnie Hawkins band three years ago when he got out of high school.

“Ronnie likes to get you real young and brainwash you. He’ll make you think you couldn’t play with anyone else even if you wanted to, and then he puts you in a black suit and a store-bought hair cut, and you just stay there until you’ve got the guts to pull out.” Brad, who also played bass in the last group came from the now defunct Paupers (also managed by Albert Grossman) where he replaced Denny Gerard, and his bass is a solid match for Clark Pierson’s drumming.

Richard Bell (piano) also comes from Ronnie Hawkins band, and both he and John Till backed the legendary Canadian harp player and singer King Biscuit Boy, otherwise known as Richard Newall. Bell’s piano is both honky-tonky and jazzy and is a light improvisational element in a group that is heavily rhythmic. Richard was in college when Hawkins offered him “$50 a week and his laundry” and gave him 30 seconds to make up his mind. He took it. For all the unsavory stories attached to his name, Ronnie Hawkins, like a Canadian John Mayall, seems to attract and develop an incredible number of really talented musicians.

All the members of Janis’ current band are Canadians, except for Clark Pierson, who played drums with Linn County. Janis discovered Clark playing in the house band of the Galaxy, a San Francisco topless club. His drumming has a funky, heavy bump and grind beat, a perfect match for Janis’ raunchy voice. “You know, I’ve had drummers that used to go-a-one, a-two, a-three …,” says Janis, “Clark just slams right into it.”

“They just weren’t happening for me,” Janis says about her last band. “They just didn’t get me off. You know, I have to have the umph, I’ve got to feel it, because if it’s not getting through to me, the audience sure as hell aren’t going to feel it either. This band is solid, their sound is so heavy you could lean on it, and that means I can go further out, and extend myself. It’s together, man, that’s what it is!”

Janis is obviously happy with the new group and it shows in her singing that is more controlled and at the same time more inventive than it was a year ago. The new group puts out a wall of sound that is a perfect foil for Janis’ incredible range and modulation. In its new context, her voice can go through its almost impossible series of changes: laughing and crying in the same line, singing harmony with itself, cracking up, and finally, taking off into the breathtaking and suspenseful endings, a mind-blowing collage of sound patterns that make her now, more than ever, one of the really great gospel/blues singers of all time.

Back home in Larkspur, Janis talked about her future plans. “Well, you know, honey, we’re still on tour. Next week we’re going to be in the L.A. area—Santa Ana, San Bernardino and one of those others Sans, I don’t know—and after that … well, if that Mt. Fuji gig comes off we’ll be there in August.”

Records? “Well, we’ll be cuttin’ a single as soon as we can get some studio, but I don’t know what it will be. My producer’s got one idea and I’ve got another, so we’ll have to see. And an album … well, we’ve got to fit recording time around the gigs. You know, we rehearse, and I sing four nights a week, and my voice can’t take much more. We’ll sneak into a record studio sometime for the album, but I don’t know when. We’ll figure it out.”