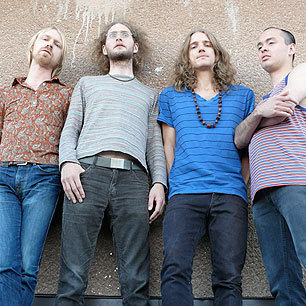 On a balmy evening in mid-September, I had the psychedelic kick of watching Jack White at work, producing new wax at his home studio in Nashville. On the other side of the control-room window, the Swedish quartet Dungen filled the playing space with an iridescent thunder destined for a forthcoming seven-inch “Blue Series” single on White’s Third Man label. The piece I heard, a few times, was a heavy stunning instrumental long enough to spill over both sides of a 45. I hope it stays that way. Dungen’s founder-composer Gustav Ejstes hammered a hypnotic winding-staircase figure on piano, threaded by Reine Fiske‘s snake-like coils of scouring-fuzz guitar. “Do more of that thing, the lick you were playing at the end,” White told Fiske after one take, then suggested that Ejstes start the piece alone, for extra-ghostly effect, before the power chords and rhythm section kicked in. “Man, that was sick,” White said with a delighted cackle after Dungen hit a metallic early-Procol Harum high — my impression — on the next extended performance. “Let’s have another one.”

Two nights later at a local club, the Mercy Lounge, Dungen — with bassist Mattias Gustavsson and drummer Johan Holmegard — played a set that was a full hour of the mighty glow I heard White capturing live to eight-track tape. The band’s new album, Skit I Allt (Mexican Summer), can’t help emphasizing grace and concision: Ejstes overdubs many of the instruments himself, with an alluring arctic-breeze spin on bucolic English prog-rock — particularly the early-Seventies heyday of Caravan — in his flute, organ and grainy choir-boy singing in “Vara Snabb” and “Min Enda Vän.” But there are full-band blasts too, like “Högdalstoppen,” and the group flexed that elegant muscle at length on stage. Fiske, who has played with Ejstes since the latter started Dungen as a mostly-studio project a decade ago, has a compelling distorted tone that is at once liquid and bruising.

Skit I Allt is, apparently, Swedish for “Fuck all.” The cumulative effect of my Nashville nights with Dungen — and White — was more like “Hell, yeah!”