Third Man Records Cass Corridor is covered in black plastic wrapping on Thanksgiving night, its windows hidden to the public. But above the facade, a brightly lit Third Man radio tower signals life inside: Jack White is throwing a private party for a few hundred guests in Detroit.

They’re celebrating the Motor City–made, Nashville-raised label’s return to the historic Cass Corridor, where the White Stripes played their first gig at the now-shuttered Gold Dollar in 1997. Dozens of campers line the sidewalks of 441 W. Canfield St. — about a mile from the Gold Dollar — eagerly awaiting tomorrow morning’s unveiling of the new Third Man retail store (and soon-to-come record-pressing plant) at that address.

Through the velvet-roped entryway is a gathering of White’s friends, family and fellow rock community, including the Dead Weather’s Dean Fertita and the Raconteurs’ Brendan Benson. It’s easy to spot White and his Third Man team because they’re wearing identical black suits, black shirts and yellow ties (White takes it one step further with vivid yellow shoes). Their outfits match the Third Man–branded merchandise lining the tables — T-shirts, hats, coffee mugs, lighters — and the brick walls, which are black and yellow, too. Even the Polaroid photo booth in the corner makes black and yellow prints.

White knows a lot of people, but there’s space inside for everyone: Cass Corridor’s 4,000-square-foot bi-level retail area is nearly quadruple the size of Third Man’s Nashville store, which opened in 2009. “It’s a piece of artwork that’s been evolving over the past six to eight weeks,” says Roe Peterhans, who is directing operations for the Detroit location. Third Man closed on the space June 1st, but work didn’t begin until mid-September — “it was a blank canvas with a loose structure,” he says — and the original vision changed. 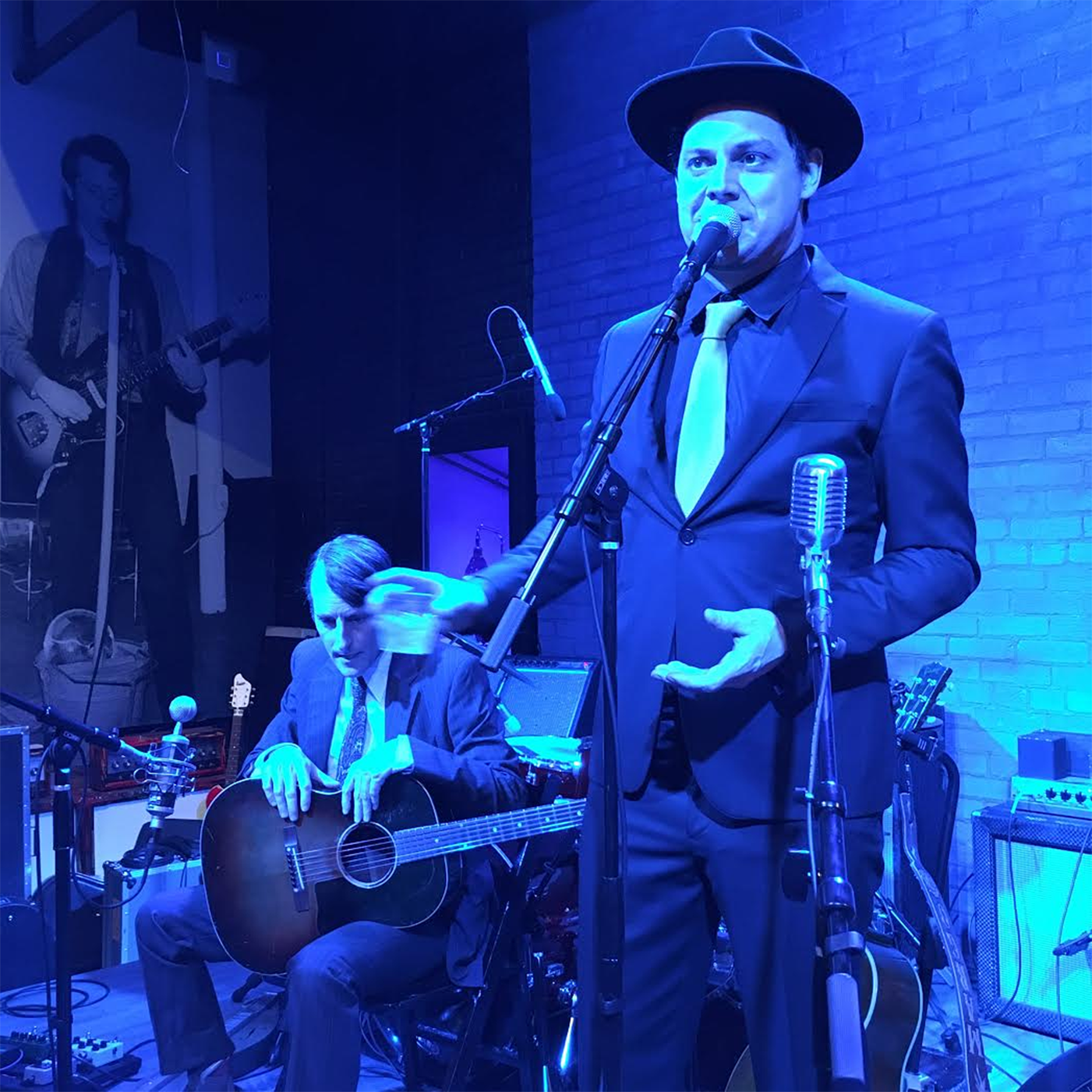 Fertita has been in town since Monday and has watched the store’s finishing touches come together. “The space is visually stunning and important for the city,” he says. “It’s important to have places where art and music is shared and talked about.”

A performance space was never part of the plan, but now it’s a key highlight. Wall-sized photos surround the small and intimate stage, commemorating three generations of local rock bands who have played in the Cass Corridor: MC5 at Wayne State University, the White Stripes at the Gold Dollar and the Gories at the Willis Gallery. They’re accented by vintage videos, like MC5 at Detroit’s Tartar Field in 1970. “Jack [White] is really history-conscious,” says Gories member Danny Kroha. The photo of him on the wall was taken in 1988, on the very same block.

Kroha is getting ready to play a solo acoustic set, but first, White insists on making a toast. “It’s such a wonderful thing for Third Man Records to be here in Cass Corridor, where we all made our bones,” he says, raising his glass — there’s an endless supply of champagne at this party. Cass Corridor recently rebranded as the hipper, more upscale Midtown, but White chooses to remember its earlier days: There’s talk about sculptor Gordon Newton, the music of the Gories and the sounds that once came from the Gold Dollar.

His speech is met with whoops and cheers. “Everything about this neighborhood, to me, seems like the perfect place for the renaissance and the rebirth and the regrowth from the ashes that Detroit’s going to rise from,” he tells the crowd, echoing the motto of the Detroit flag (and lyrics from his track “Lazaretto”). 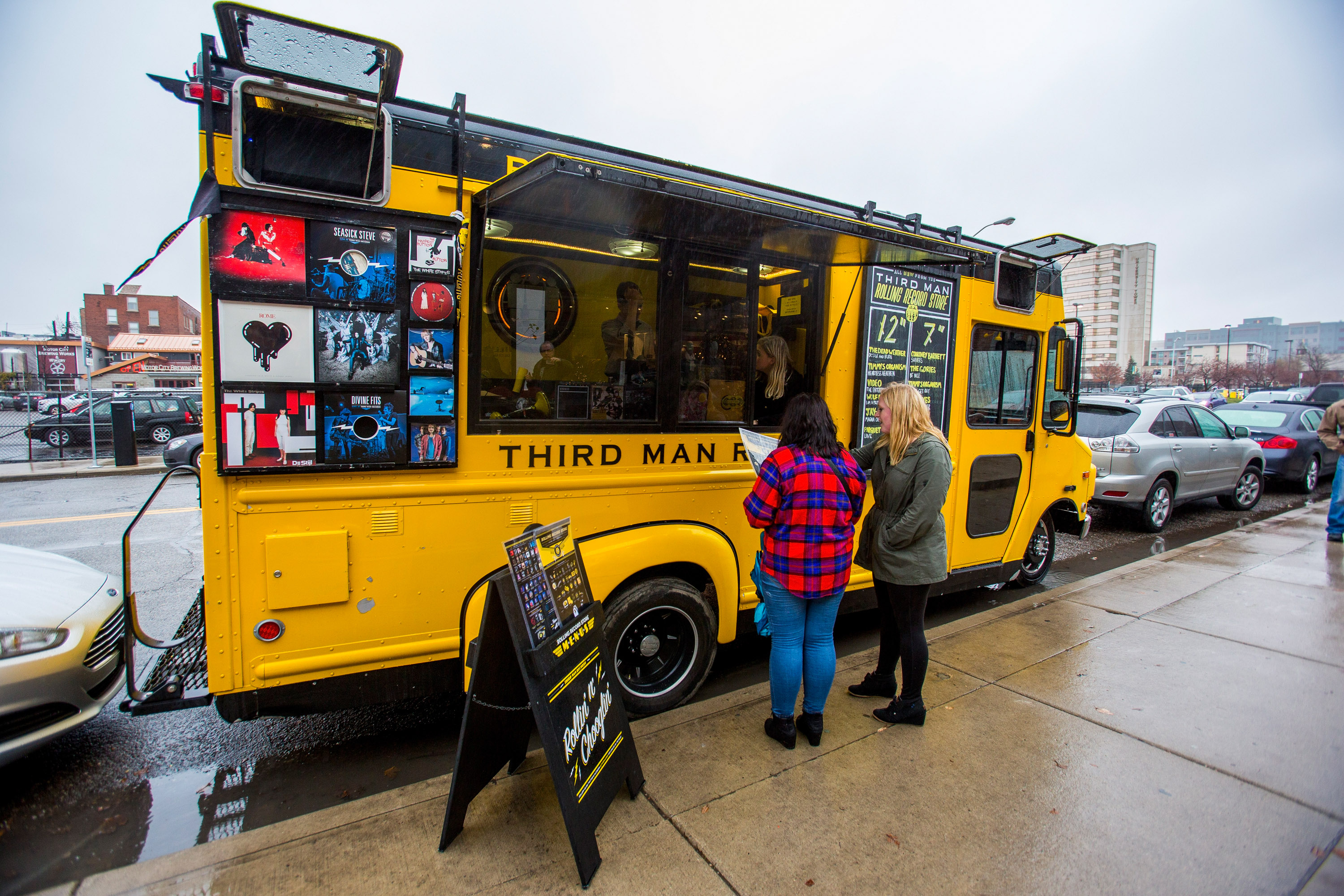 But past the area where White stands onstage, past a hallway lined with tricolor, liquid-filled and rose-petal records, is Third Man’s solution to making Detroit rise from the ashes. At the back of the store is an entrance to what is soon to be a 10,000-square-foot vinyl record-pressing plant — one of less than two dozen in the United States, and a few dozen around the world. A child rides around the expansive yellow floor on a token-operated mechanical elephant, circling a sign that says, “Coming soon! The Third Man Vinyl Pressing Plant.” Less than a week ago, the former parking garage was still in raw shape, but crews have been working around the clock to have it ready and painted — black and yellow, of course, with twinges of red — in time for the store’s grand unveiling.

While the pressing plant isn’t functional yet (eight custom Newbilt presses are en route from Germany), the goal is to eventually press records on a 24/7 basis. There are no current plans to incorporate a lathe for cutting masters, but it’s also not out of the picture. “The pressing plant could triple our employees,” says Ben Blackwell, Third Man’s co-founder who handles most of the label’s vinyl manufacturing and distribution. He believes there’s potential for up to 30 industry jobs, which will help bring manufacturing back to the Motor City. “There’s a whole bunch of people in Detroit who have history and job experience in plastic molding — that feels opportune, that feels right.”

It’s the first Detroit pressing plant to launch since 1965, when family-operated Archer Record Pressing opened its doors. The business has been a staple in the Detroit music community for decades: It was where the Gories pressed their first record, and where many techno labels turn for product. But a spike in demand has left Archer backed up and behind for months, a similar problem faced by Nashville’s United Record Pressing, Third Man’s current go-to. “There are more customers than suppliers,” says Blackwell, who notes Third Man has no intention of taking business from Archer. (Third Man initially offered to buy out Archer, but was turned down. Current owner Mike Archer declines to comment.)

With a shortage of time and availability to make records, the resurgence of vinyl — up 51 percent in sales in 2014 — has produced a strong need and opportunity for more pressing plants to open; four others have opened in the United States this year alone. Pausing for a moment, Blackwell considers the outcome of Third Man and Archer existing side-by-side in Detroit. “I never really thought about what that means in terms a bigger scale,” he says. “We like to create things that don’t exist, so this falls in line with everything we’ve believed in and operated under since day one.”

Another pause. “We never said we wouldn’t open another store, you know? I did at one point say I never wanted to operate a pressing plant, so I will have to eat my words on that one. But things change.”

The following morning, Third Man’s plastic wrapping is pulled from its windows. It’s Black Friday, and dozens wait in the rain to snag a series of reissued Tamla Records 45s, which include Marvin Gaye and the Supremes, but there’s a hold-up: Nobody wants to leave the store, and only 300 people are allowed inside at a time. 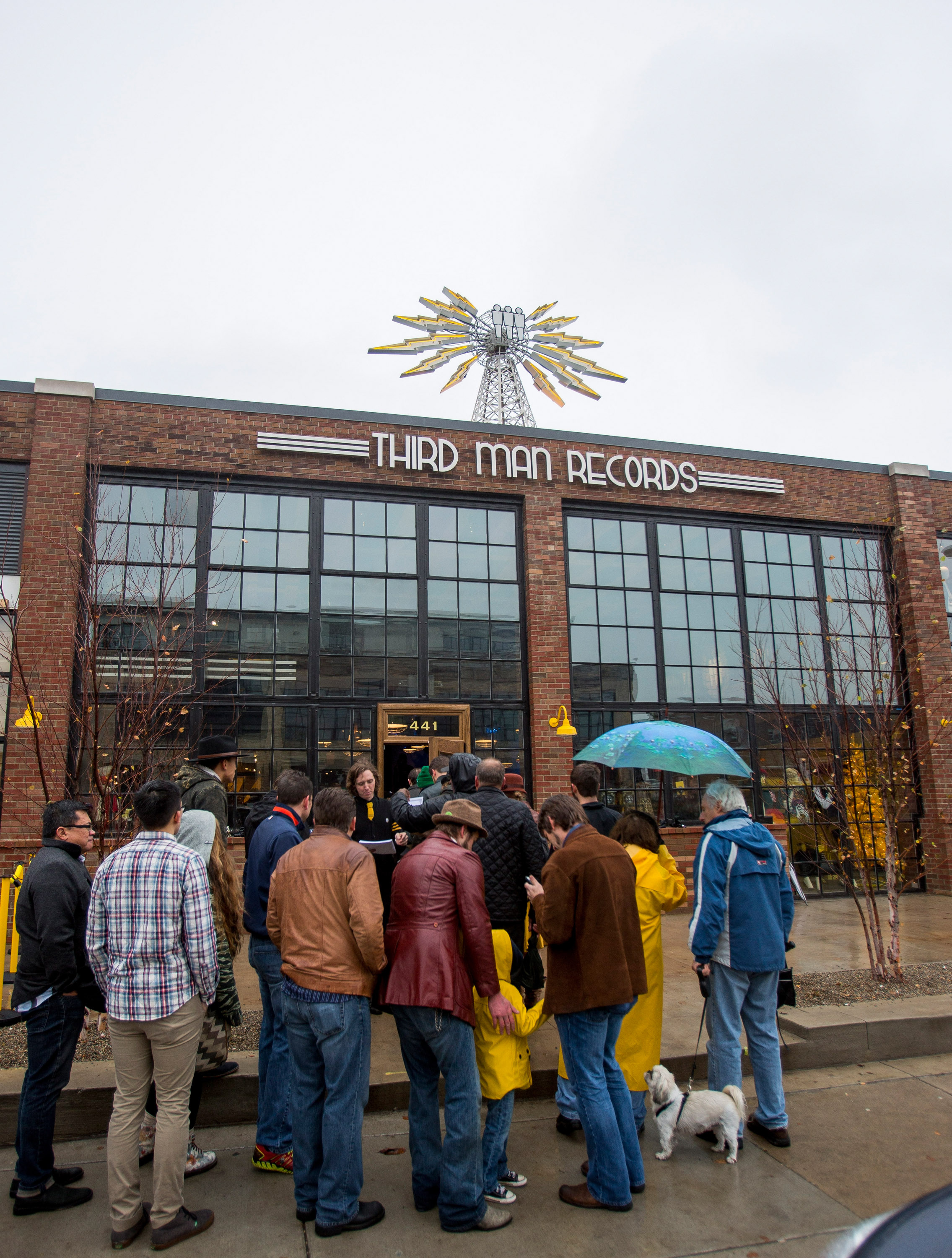 Everyone’s trying to meet White, crowding the hallway where he was spotted earlier. A few girls ask about getting records signed, and others hope to score a photo. But unlike at last night’s preview party, where he happily mingled with the crowd, White retreats to privacy in the VIP balcony area above the stage to observe his black-and-yellow kingdom in peace. The Gories are about to play their first-ever in-store performance, and insanity ensues below — people are antsy because the band is running late.

Most eyes are on the balcony, though. To Detroiters, White is a fascinating cross between a martyr and a runaway.

When Detroit’s Masonic Temple was faced with the possibility of foreclosure in 2013, White stepped in and paid off the building’s outstanding tax bill for $142,000 (its Cathedral Theater was accordingly renamed the Jack White Theater). The temple — the largest of its kind in the world — was where his mother worked as an usher, and where the White Stripes later played shows. It sits around the corner from the defunct Gold Dollar in a mostly vacant area, but has the rocker to thank for its continued existence.

Saving the Masonic was a form of redemption for White. Eight years prior, he left Detroit for Nashville, taking Third Man Records with him. Unhappy with his hometown’s music scene, he openly criticized Detroit — “It was so super-negative,” he told the Associated Press — and later penned a love poem to be published in the Detroit Free Press, expressing his misinterpreted views of the city where he was born and raised.

But Third Man Cass Corridor might not have survived the Detroit that White left a decade ago.

There is something special for Peterhans about today’s hectic energy — “What’s happening on this street and around the block is outstanding,” he says — but Third Man is making it a mission to celebrate and keep alive the legacy that predated Midtown, one that most of the team grew up on. The now-sterling area once littered with needles and prostitutes was home (and continues to be home) for much of Detroit’s artistic community. “Cass Corridor was a hub of gritty, interesting energy from artists, musicians and writers,” he recalls. “It was a low-income area, but it was a hotbed of band activity and great clubs to play at.” 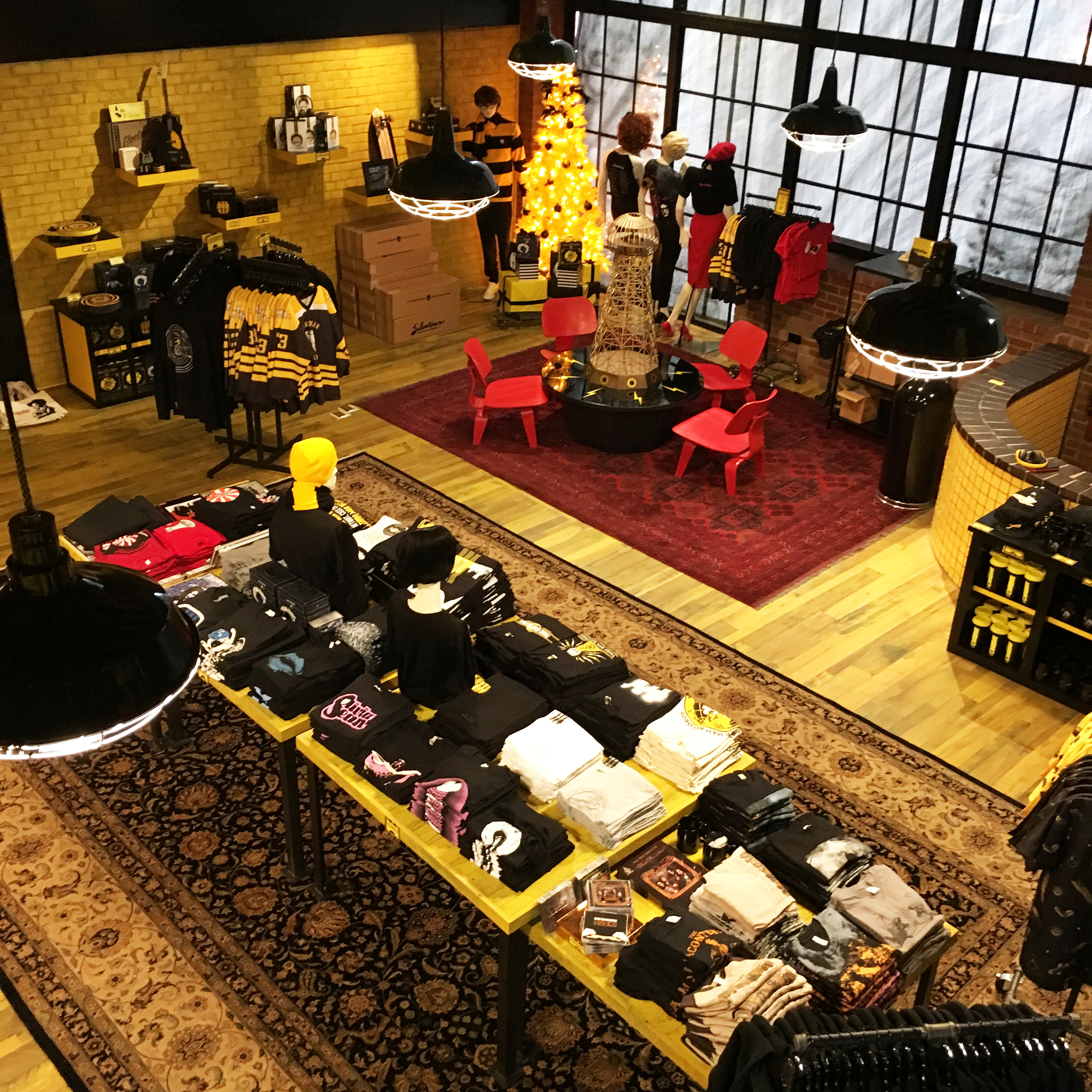 From this area comes more than half a century of music history that includes Fortune Records and bands like Electric Six and the Von Bondies. Not far was the headquarters of Creem magazine, the first rock journal where critic Lester Bangs penned essays and became editor in 1971, and Cass Technical High School, where Motown greats like Diana Ross got their start (White is also an alumni).

To bring back that vibrant, creative spirit, Third Man will be curating special Detroit programming overseen by Peterhans. There are plans to utilize the performance space for everything from comedy to poetry readings that’ll coincide with Third Man’s book-publishing arm. “We’re not going to be just booking bands here,” he says.

The programming will churn out products like posters and live records, working in conjunction with the Nashville store. “Anything that fits our interests, we’ll put out. We want to find that young genius or that cool band that’s playing in some basement or garage, that nobody’s heard of, or that lost tape or recorded album that never got put on any kind of storage medium.”

That mentality to seek out lost art led Third Man to reissue Tamla singles on Black Friday, thanks to a partnership with Universal Music Group. There’s a display in the store for the early Motown label, as well as a display for Sun Records and another for Paramount — Third Man doubles as a music-history museum. “We’re pressing 45s that haven’t been available for 50 years,” says Blackwell, who notes Third Man has no genre boundaries (he expresses strong interest in working with the Detroit techno community). “This is just the beginning of what we can tackle in terms of Detroit-related music.” 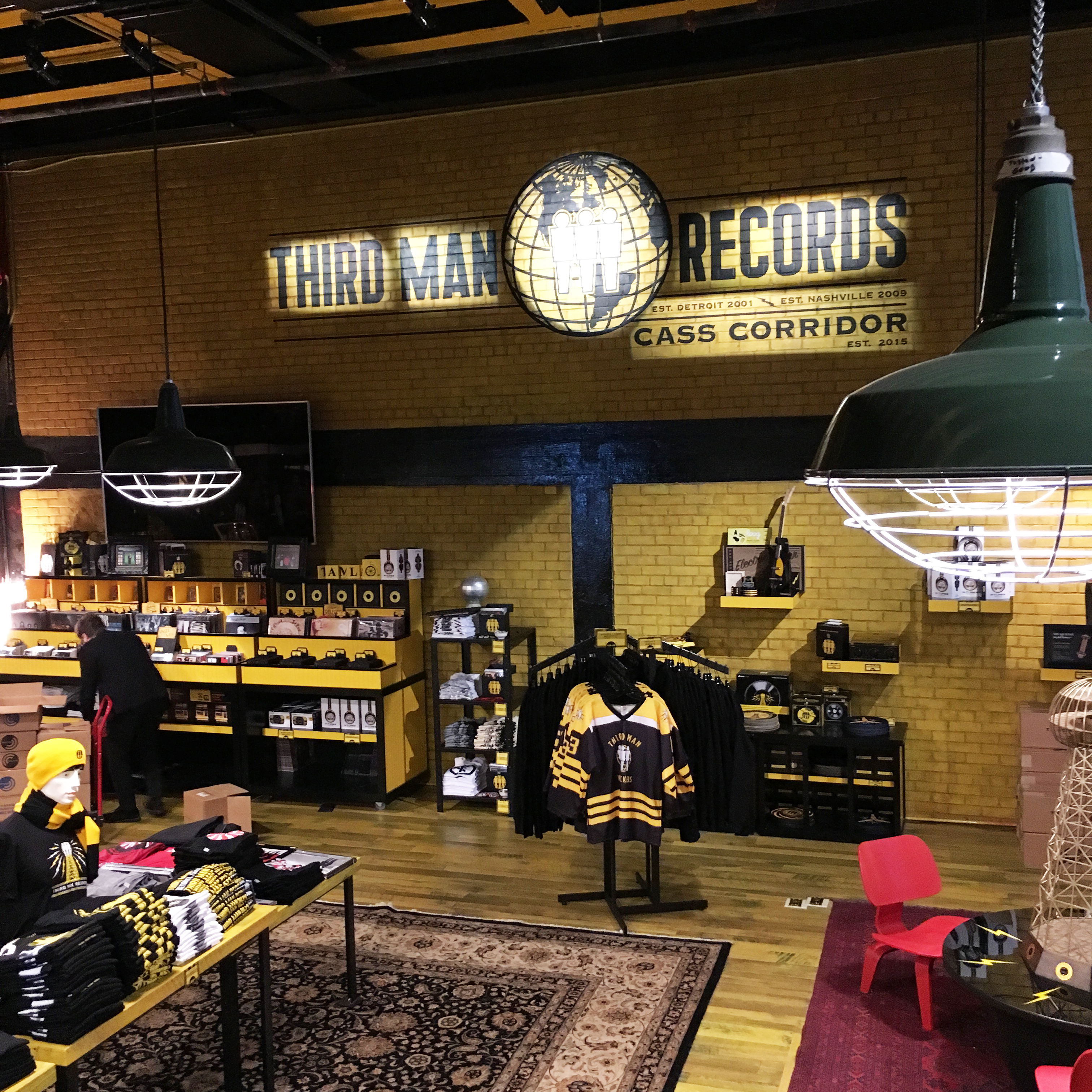 Third Man’s finally come home, and they want everyone to know — even the door of the Cass Corridor store says it all: Detroit 2001, Nashville 2009 and Cass Corridor 2015. They worry about how many great albums have been lost to time, or how many bands were never able to get their sounds out because of a lack of production, but the Third Man team continues to look forward — “in baby steps,” according to Blackwell — and Peterhans is confident their Detroit retail store and pressing plant will inspire artists to create.

“Turning people on to things they’ve never heard or seen — that’s a huge goal,” he says. “If we can make and sustain interest in vinyl, if we can get people shopping for records or buying records in malls, putting vinyl back into traditional retail locations — it’s going to be good for everybody.”

“I just want to see younger bands and musicians being encouraged to create,” adds Fertita. “The more places people can go to be inspired by what they see and hear, the better.”