Midway through his Bonnaroo headlining set last night after a last-minute cancellation by Mumford & Sons, Jack Johnson announced he had written a song about the festival. Over a slow-rolling acoustic progression, he told the story of being on the way to Manchester, Tennessee to play a surprise late-night gig with friends Animal Liberation Orchestra when he received a call. “[They said] can you get a band together in two days?” Johnson sang, “I don’t know, it’s been a year or so since we’ve played these songs. Oh, what the hell. It’s Bonnaroo!” As the band kicked in under little fire lanterns flying into the sky, the crowd went nuts.

“I was expecting more train wrecks,” Johnson told Rolling Stone as he ate a slice of pizza on a couch backstage after his set, while his three kids ran around. “Once I got that Bonnaroo song, I felt ready. It was my way of saying, this thing just barely came together, so we’re doing our best.”

Johnson rose to the occasion, proving he had a sense of humor about the pressure of the event – flying his band from around the country, renting the stage equipment and rehearsing all day for his first show with the band in over a year. He led huge sing-alongs of Mumford & Son’s “The Cave” (the whole set was dedicate to Mumford and Sons’ bassist Ted Dwane, who is recovering from surgery to remove a blot clot from his brain) and Johnson’s own staples like “Brushfire Fairytales” and “Bubble Toes.” Johnson also quieted the farm with a spare solo acoustic set including a sweet “Better Together.” “All the quieter songs felt like they worked the best,” Johnson said. “I didn’t necessarily have them jumping up and down but I felt like those moments really connected when I would bring it all the way down.”

Behind the Scenes at Bonnaroo 2013

As a consolation to woebegone Mumfords fans, fellow mandolin- and accordion-wielding chart-toppers the Lumineers kept their date with the Which Stage, playing for a packed-to-critical-mass crowd swooning over the band’s iPod-commercial-ready repertoire of earnest folk-pop. The band pulled out the stops, making the most of its moment in the spotlight when they migrated mid-set from the stage to play in a satellite area among the crowd, then made their way back through the parted masses like champion prize fighters. In addition to their ubiquitous breakthrough hit “Ho Hey,” and a dozen or so songs that sound a helluva lot like it, the band tried its hand at a dark cover of Bob Dylan’s “Subterranean Homesick Blues.” The Looms also made a surprise appearance yesterday afternoon in the comedy tent, where they joined actor-comedian Ed Helms – who moonlights as a bluegrass banjo plucker, appearing as such at a series of events over the course of the festival. The band played “Ho Hey” as part of Helms’ vaudevillian Whiskey Sour Radio Hour.

Afternoon sets tended to the mellow, with indie darlings like Dirty Projectors, Cat Power and Beach House turning in sets of spacious, moody art rock. Even Nineties hip-hop legend Nas‘ early-evening What Stage set was a love fest, with the energized rapper smiling broadly as he briskly worked the stage from wing to wing and cued the crowd to join in on powerhouses like “If I Ruled the World” and “Heaven and Hell.”

With odd-metered rhythms pushing and pulling against trickling afro-beat-inspired guitar lines and cavernous multi-part vocal harmonies, Dirty Projectors have been a world-class festival favorite since their 2009 Bonnaroo debut. And yesterday the band’s fan-favorite “Stillness Is the Move” got two airings, as Solange offered her smoothed-out R&B adaptation of the song during her brief mid-afternoon Which Stage set. 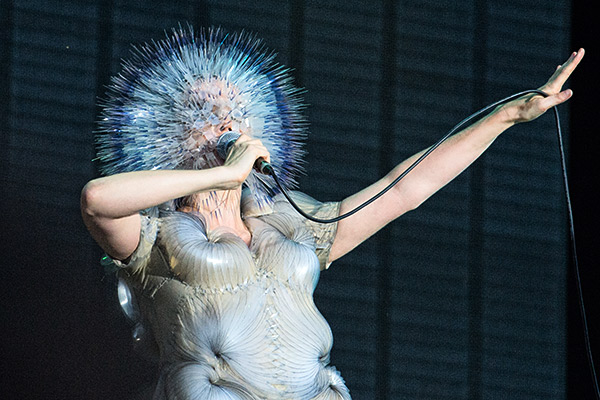 The mood continued into the early evening with Björk on the What Stage. In the most mind-blowing set of the day (and perhaps the most compelling performance of the festival so far, with the exception of Paul McCartney), the enigmatic Icelandic singer was costumed in a form-fitting, bubble-textured silver dress and cranium-encompassing headgear adorned with thin white whisks standing on end and making her look like a singing space-age dandelion. The singer was backed by a drummer mostly pounding on electronic pads, a keyboardist/sound manipulator and a 14-piece all-female choir clad in cultish multi-colored robes. Sometimes they marched in place; other times they sat crossed-legged or hunched over in an inward circle, or danced on a riser behind the singer. Occasionally they spread out to flank Björk on the stage as she spastically interpreted the rhythmic nuances of post-rock electro standouts like “Joga” and “The Hunter,” delivering each with her inimitable celestial pipes. It was a presentation probably unlike anything festivalgoers have ever seen.

A true piece of performance art, the show had aesthetic rising action, with Björk pacing out her set to build from down-tempo cerebral sonic hauntings like “Crystalline” and “Hidden Place,” to explosive, aggressive dance-electro chargers like the frenzied industrial stomper “Declare Independence” and the pyro-augmented, rhythmically chaotic closer “Nattura.” At one point, the singer startled the crowd when she let out a piercing shriek, angrily checked her mic stand against the stage and lunged urgently towards fans on one of the pits. She changed a mellow day into an intense night as if on command during the Post classic “Hyperballad,” which morphed into an abrasive, almost EDM-leaning outro just as the sun set.

It was a dramatic warm-up for an epic night of music. Midnight provided the hardest decision of the entire festival: R. Kelly performing on the Which Stage, Super Jam with Jim James, John Oates and Zigaboo Modeliste of the Meters, Billy Idol and Weird Al on separate stages. Unfortunately, Weird Al’s set didn’t take on the theatrical charm of Alice Cooper’s stage prop extravaganza last year; it was bogged down in goofy videos between songs. Bonnaroo fans who went to see Weird Al in action playing the classics had to watch several minutes of him fake-interviewing Megan Fox before his subpar Doors parody “Craigslist” and Lady Gaga parody “Perform This Way.”

Meanwhile, Yankovich’s fellow Eighties icon Billy Idol faired better across the way at That Tent, where the size of the crowd spilling past the outskirts of the tent dwarfed the size of the one under it. The space was teeming with festivalgoers eager to eat up the hit-parading party set the punk/New-Wave icon promised in advance of the festival. Indeed, boasting a leather jacket, spiked platinum hair and a glistening six pack, the singer did faithfully deliver sneering rock-radio favorites like “Rebel Yell” and “White Wedding.” The overall set pacing, however, aside from an early “Dancing with Myself,” fist-pump-punctuated “Flesh for Fantasy” and spirited “Cradle of Love,” suffered from a deep cut too many and more downbeat ballads than a party-tastic late-night romp should ever have.

But the Super Jam was the place to be last night. After D’Angelo played a funky covers set last year backed by Questlove and Co., James’ crew raised the stakes, performing a soul-stirring set ranging from John Lennon’s “Instant Karma!” to Prince’s “1999” and Sly and the Family Stone’s “Higher.” R. Kelly emerged for a Sam Cooke medley of “A Change is Gonna Come” and “Bring it on Home to Me.” They then invited up Brittany Howard, who screamed a soul-stirring take on “Satisfaction,” closest to the live Otis Redding version. Earlier, Howard took the stage to duet on Sam and Dave’s “When Something Is Wrong With My Baby.” 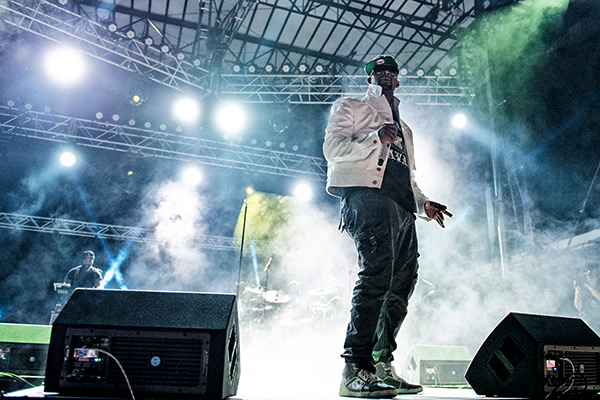 Like many of the heroically ridiculous antics in his storied career, Kelly wasted no time before confounding assembled fans and morbidly-curious novelty seekers. Always one to make an entrance, the religiously lecherous R&B cornerstone-cobbler first appeared perched on a crane in the Which Stage rafters, as a choir took its place below. Meanwhile, an opening “Ignition” suffered from a false start. What exactly was going on here? Was a more elaborate reveal planned? Was this a genuine Spinal Tap moment, or just another calculated antic from the mind that brought us “Trapped in the Closet?”

Bold, colorful production was also the name of the game for sleek Australian electro duo Empire of the Sun. Dressed like centurion dandies, they pumped up the jams from their just-released dance-pop tour de force Ice on the Dune with a foggy, laser-laden spectacle to dazzle 4 a.m. candy flippers. Those revelers have one more day of festivities left, as Bonnaroo wraps tonight with appearances from Tom Petty and the Heartbreakers, Kendrick Lamar, Macklemore & Ryan Lewis and the National.