They brought no plan or set lists, but modern troubadours Sam Beam (a.k.a. Iron and Wine) and Glen Hansard (the Frames, Swell Season) filled a tiny club in Los Angeles last night with songs aching, gentle and raging for a private show hosted by public radio stalwart KCRW.

The intimate two-hour set at the Sayers Club came together as a result of Beam being in town to promote Iron and Wine’s upcoming album, Ghost On Ghost, while Hansard was passing through on his way back to Dublin. They share management and a long musical friendship.

Beam began his opening set with a gentle “Caught in the Briars,” which opens his new album as a full-band arrangement, but was stripped down and vulnerable at Sayers. Also from Ghost On Ghost were a breathless “Grace For Saints and Ramblers” and “Low Light Buddy of Mine,” a dusty, quietly howling tune he described as “a song about old people having sex . . . Everyone has their thing.”

In a dark suit and bushy auburn beard, Beam cheerfully took requests from the 200 fans and radio staff crowded between the bar and leather couches. On the concrete wall behind him were large framed images of Queen Elizabeth and literary icon Samuel Beckett.

One fan shouted for 2003’s “Jesus the Mexican Boy,” which Beam began to play, but as he stumbled for a moment on his guitar, he joked, “That’s what happens,” before easing into a raw, emotional reading. “There’s a misconception that we practice all the time,” he said with a grin. When fans hushed others for talking during his set, Beam laughed. “I like it when people are on my side.” 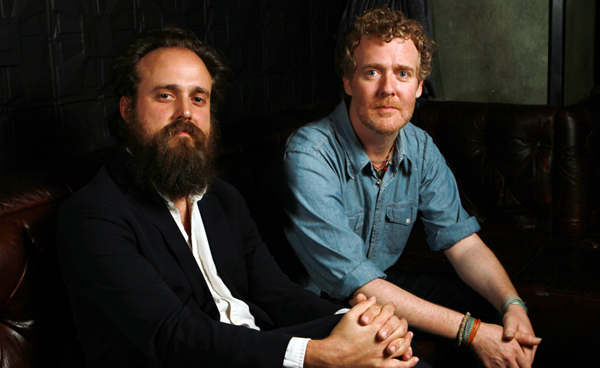 In an interview with Rolling Stone before their performances, the two singer-songwriters both said they value being alone with a guitar and no particular plan. “Sometimes you’re doing it really selfishly, sometimes you’re doing it selflessly,” Hansard said of the spontaneous song choices. “Hopefully a good gig is somewhere in the middle. It’s not entirely up to the audience and it’s not entirely up to you. When the singer is right and the audience is right, there is a magic that can exist between the two.”

Of the tender new Iron and Wine songs he performed last night, Beam said, “There’s some complex things going on, but the overall effect is simpler. The last record, there were some angry tunes, and I felt it was appropriate to do some jagged synthetic sounds, polyrhythms. The songs were just different this time. There were narrative elements that unfolded more gently for the most part.”

Before returning to Ireland, Hansard planned a stop in New York to record some new ideas, including “Her Mercy,” written only days earlier. He began his Sayers Club set with the song. “It’s an apology,” he explained of the lyrics. “When you’re actually worthy of someone’s forgiveness it might come, but only then. The words don’t matter – it’s about when you’re actually ready. I’m still playing around with the verses.”

Before Hansard stepped onto the small stage, Beam told the crowd, “My friend Glen sings a bit louder than me. You in the front row might want to get a shield. He also spits a little.”

Hansard carried an acoustic guitar with holes worn through the surface, wearing jeans and a black western shirt. His vocals were at points explosive, shouting, begging, notches louder than Beam’s restraint, his eyes often shut and biting on his words. During the lyrics of love and misery on “Love Don’t Keep Me Waiting,” Hansard strummed a forceful riff and wailed, “Show yourself to me!”

From his debut solo album, Rhythm and Repose, Hansard performed a wistful “Maybe Not Tonight” by request. He told a story of meeting mandolin player David Mansfield by chance in New York and the same day inviting him to the song’s recording session, not realizing that he’d toured as part of Bob Dylan’s Rolling Thunder Revue as a teenager.

Hansard stepped away from the microphone to sing a raw, un-amplified “Say It To Me,” then told a story of meeting Marilyn Manson and his entourage in a Los Angeles bar, later joining them at Manson’s house. One woman was on a leash, he recalled. After a long, weird night he wouldn’t describe in detail, Hansard said, “I literally ran out of L.A. I’ve been trying to get OK with it.”

The two singer-songwriters came together near the end of the night to perform Ronnie Lane’s weary “Debris,” the lead vocal taken by Beam, both strumming a gentle melody on guitars, followed by Willie Nelson’s “Blue Eyes Crying in the Rain.” Their voices joined in angelic harmony, a couple of troubadours soaring into the night.