At 11 a.m. on Wednesday, June 18th, 2014, the six members of the Chicago-based band Umphrey’s McGee – singer-guitarist Brendan Bayliss, guitarist Jake Cinninger, bassist Ryan Stasik, keyboard player Joel Cummins, drummer Kris Myers and percussionist Andy Farag – walked into Abbey Road Studios in London and went to Studio Two, the cavernous room where the Beatles were in residence from 1962 until 1970. The first thing Bayliss did upon entering that iconic space was ask one of the resident engineers, “Can you point me to ‘The Corner’?”

“He walked me over there,” Bayliss remembers – a tight, regular spot in Studio Two where the Beatles typically congregated day after day, shoulder to shoulder, shaping songs and arrangements on the way to history. “I couldn’t believe they were just crammed there,” Bayliss says, “doing 75 takes in a row ’til they got it.”

“The first thing I did,” Cinninger says, “was clap my hands.” He makes the sound of the beat at the start of “You Know My Name (Look Up My Number),” the B side of “Let It Be.” “I heard that ambient tone. Yup, that’s Abbey Road. I wanted to witness it for my own ears, that time delay in the room.”

His band got to use it. Twelve hours after their arrival, shortly before midnight, Umphrey’s McGee left Abbey Road with a new album of their own. The London Session, to be released on April 7th by the band’s label, Nothing Too Fancy Music, features nine of the group’s original songs cut live in Studio Two – a mix of new originals, rearranged album tracks and previously unrecorded live-show hits, all done in a handful of takes, some in just one.

And there is a cover: “I Want You (She’s So Heavy)” from the Beatles’ Abbey Road, a periodic feature of Umphrey’s shows recorded that night in a single take in the final hour. “We initially bagged the idea,” Bayliss admits. “We’re going to start a Beatles song and the engineers there will be like, ‘Really, you’re going to do this?'” But, Bayliss adds, “If we don’t play it wrong, it crushes. And we nailed it.”

The Road to Abbey Road

Founded in 1997 in South Bend, Indiana, on the campus of Notre Dame University, Umphrey’s McGee have made eight studio albums and are one of the most successful touring acts to emerge from the so-called “jam band” scene, playing over a hundred shows each year. That genre distinction was never big enough for what Umphrey’s McGee actually do, which is closer to pop-smart and dance-wise progressive rock, laced with exuberant improvisation and flush with intense, melodic craft. It is no surprise that the band’s deep war chest of covers includes more than two dozen Beatles songs (along with some Bob Marley, Van Halen, Talking Heads and Lionel Richie).

But the notion of recording at Abbey Road – proposed by Umphrey’s producer Manny Sanchez – was, for Bayliss, as likely as being asked to give a sermon at the Vatican. “It wasn’t a goal,” he says, “because it never seemed like a possibility.”

Umphrey’s McGee were in London in June, 2014 for three shows at the Brooklyn Bowl club there, with one day free between landing at the airport and stage time. Bayliss, calling from a tour stop in Charlottesville, Virginia, explains how a jam band without mainstream radio hits goes about booking the most famous studio in the world: “Basically, you call in every favor you’ve been holding onto. They had to move a couple of things. It costs money too. It wasn’t cheap.” Three hours after his band walked in that day, “We weren’t even rolling tape yet. People were trying to get things tuned, dialed in, so we could roll straight.” Bayliss spent that time watching the studio clock tick, like a taxi meter in bad traffic except “at a very accelerated pace.” 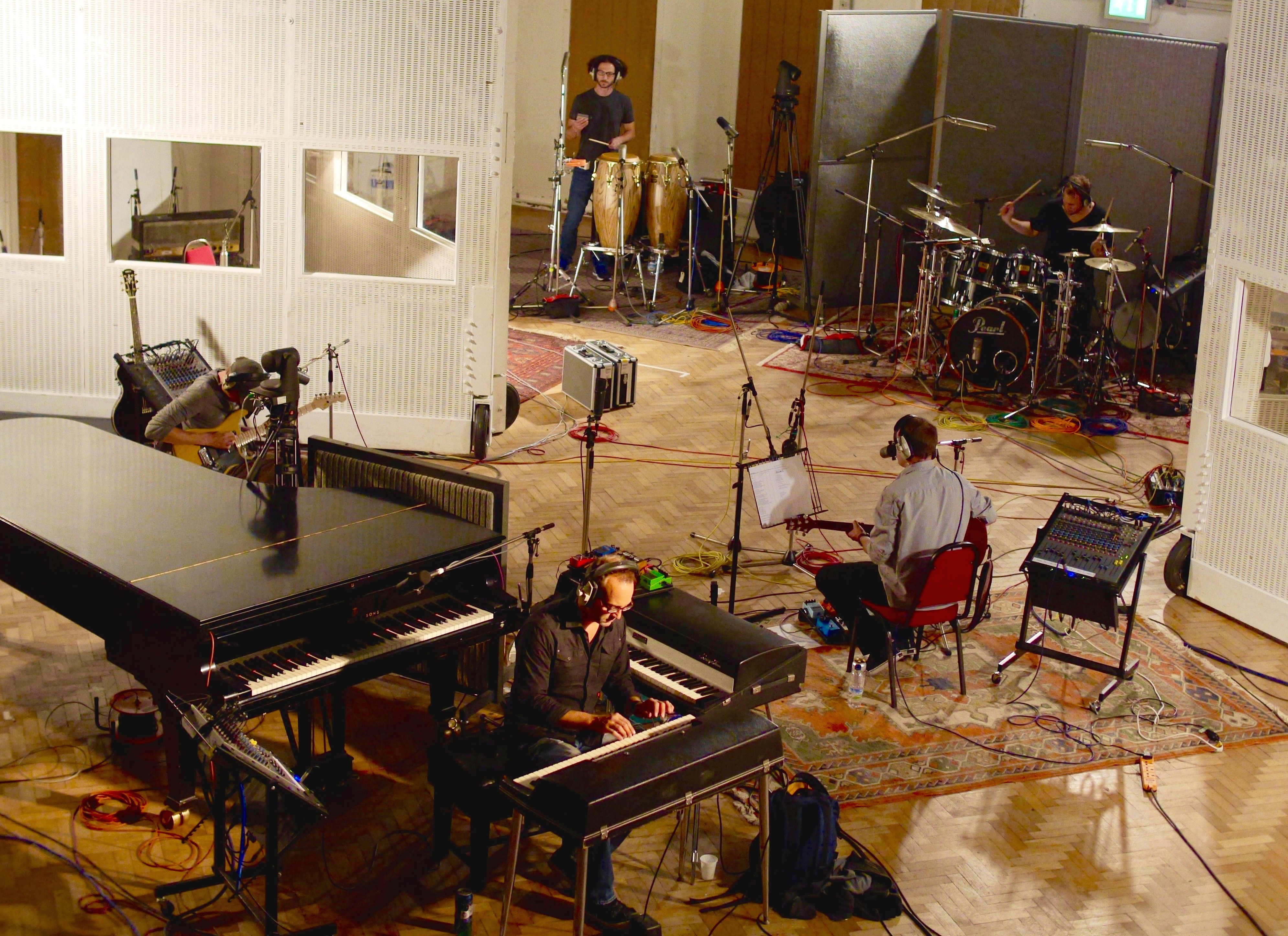 But here’s some of what that money buys you, besides legend. “We went into the original microphone closet,” Cinninger says, “with all of the Neumann and Telefunken mics the Beatles used. They are still in pristine condition. We were using these big old, condenser mics on the drums and amps, the harpsichord in the corner, this Steinway grand piano.” Stasik played bass through “this old Ampeg rig that was still there. There’s that whole English-preservation thing, where they can’t change too much, because they want to retain that old glory. And they definitely do.”

Also intact: the room tones and reverberation time from not only the Beatles’ records but classic albums by Pink Floyd, Jeff Beck, Radiohead and Kate Bush, still living under Studio Two’s cathedral-height ceiling. “It makes one note just fold over and over again, coming back around,” Cinninger explains. “Jeff Beck’s Wired album was done there. Where the band is really getting soft, like on ‘Goodbye Pork Pie Hat,’ you can hear the echo in the room. The notes keep singing operatically.”

“It’s like going to church,” Bayliss says of Abbey Road. “There is a reason why everyone goes to London and wants to walk across that street and get their photo taken,” imitating the cover photo on the Beatles’ namesake LP. “When we got there, everybody was doing it. We were loading in our gear, and you could tell people were staring at us, like, ‘Who the hell are these guys?'”

On February 11th, 1963, the Beatles recorded 10 of the 14 tracks on their debut album, Please Please Me, in just over 12 hours. The result was an authentic portrait, live in the studio, of the group’s club act in Liverpool – a shot soon heard ’round the world.

Umphrey’s McGee’s The London Session is a similar document in that it runs like a concert set, including the impromptu bits: changing the arc of a show by calling for unexpected tunes in the middle of the action. The group went into Abbey Road expecting to leave with a release-able souvenir: four or five tracks on an EP. After getting six, with an hour and half of studio time left, the band quickly picked and played, in a mini-set rush, three originals and the Beatles cover, which they hadn’t done on the road for two months. There were live guide vocals, but the real singing was recorded later in Chicago and Los Angeles. “In hindsight, maybe we should have let it rip,” Bayliss says. “But at that point, we were out of gas.”

The first songs Umphrey’s McGee recorded that day were acoustic versions of “Cut the Cable” and “No Diablo,” from their 2014 arena-muscle experiment, Similar Skin – “to have something we could go in and get quickly,” Bayliss explains. “We hadn’t talked about it much. Kris was like, ‘What are we doing differently?’ I love Guns N’ Roses, so I said, ‘Play it like G N’ R Lies. What would Steven Adler do?’ Kris got this look on his face, like, ‘OK!'”

“Bad Friday” was next, a new jolt of cutting-jangle funk debuted live in Denver at the previous New Year’s Eve. “Comma Later” – smooth R&B menace with Wired-style lead guitar – was another recent original. But “Glory,” “Eat” and “Out of Order” were all set-list regulars that had never been on a studio release. The last, from 2000, “was written with our old drummer,” Bayliss notes. 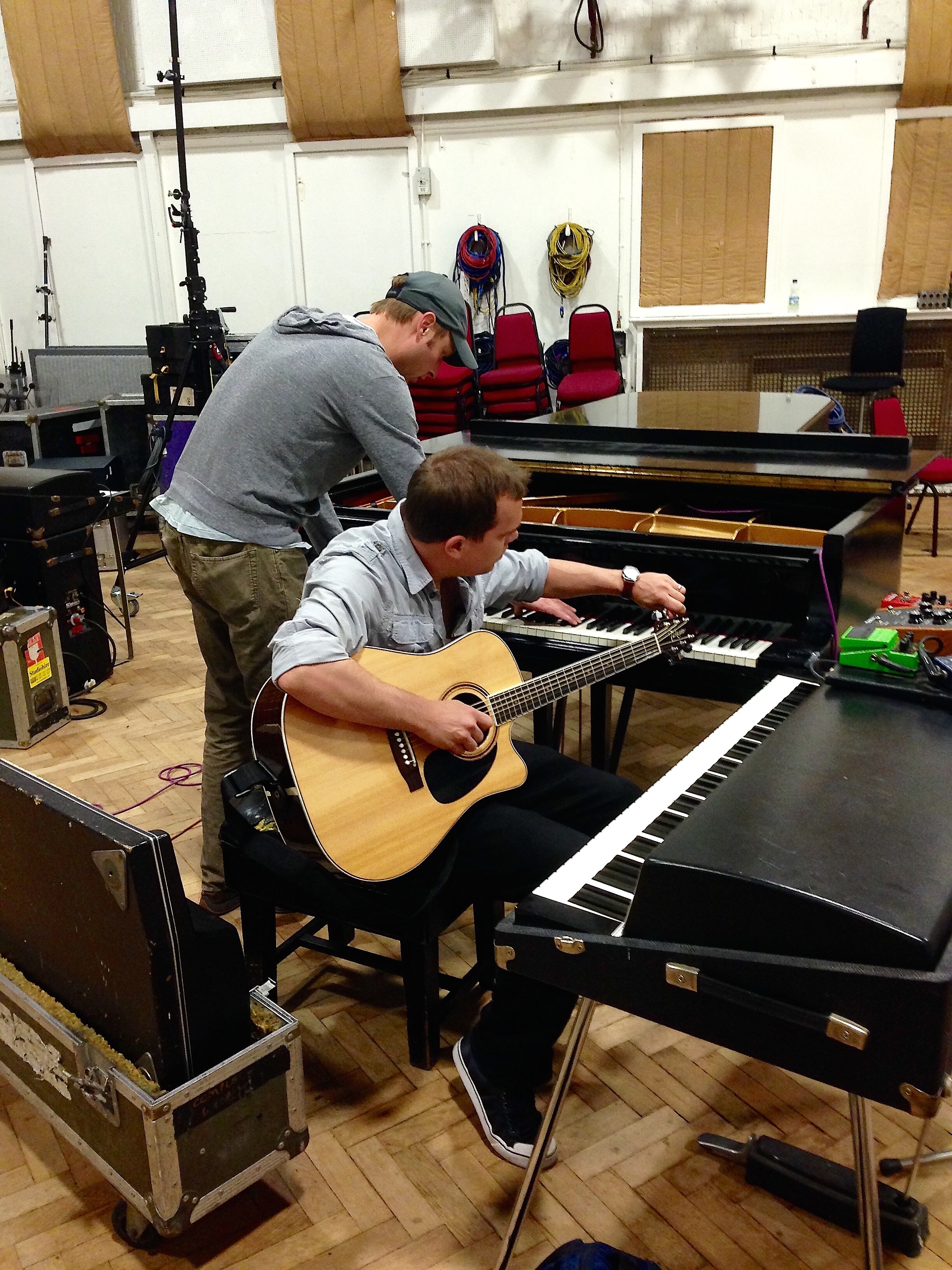 “We’d always looked at ‘Glory’ as a live piece,” says Cinninger, “a ramp-up vibe, almost like gospel. It only has one section. But as the session went on, we were like, ‘Wait, we can get a lot more done. We broke out our song list, which has about 160 originals and went, ‘What songs haven’t been turned into little babies on records?'”

The unplanned result was a historical primer, this band’s evolution story inside 51 minutes. “You’re looking at 14 years of change,” Bayliss affirms. “I never thought about it before you said it. But we did capture a good representation of our spectrum.”

Bayliss walked out of Abbey Road with something else: “A sense of legitimacy I didn’t have before,” he says with an audible lift in his voice. “This is something no one can take from me. And it gives us confidence moving forward, writing new songs. Any studio experience after this,” he adds with a laugh, “will be so much less stressful.”

An extra high: Bayliss can legitimately file Umphrey’s McGee’s The London Session on the shelf next to his Beatles albums. In fact, he already has. “I have the test pressing at my house,” he says, “and it’s there, at the end of the Beatles. My son is two-and-a-half; he can name the songs on Abbey Road before the vocal kicks in. He’s gonna see this, and I’m gonna explain it to him when he’s old enough: ‘I went to work where the Beatles did.'”

The London Session can be pre-ordered here.