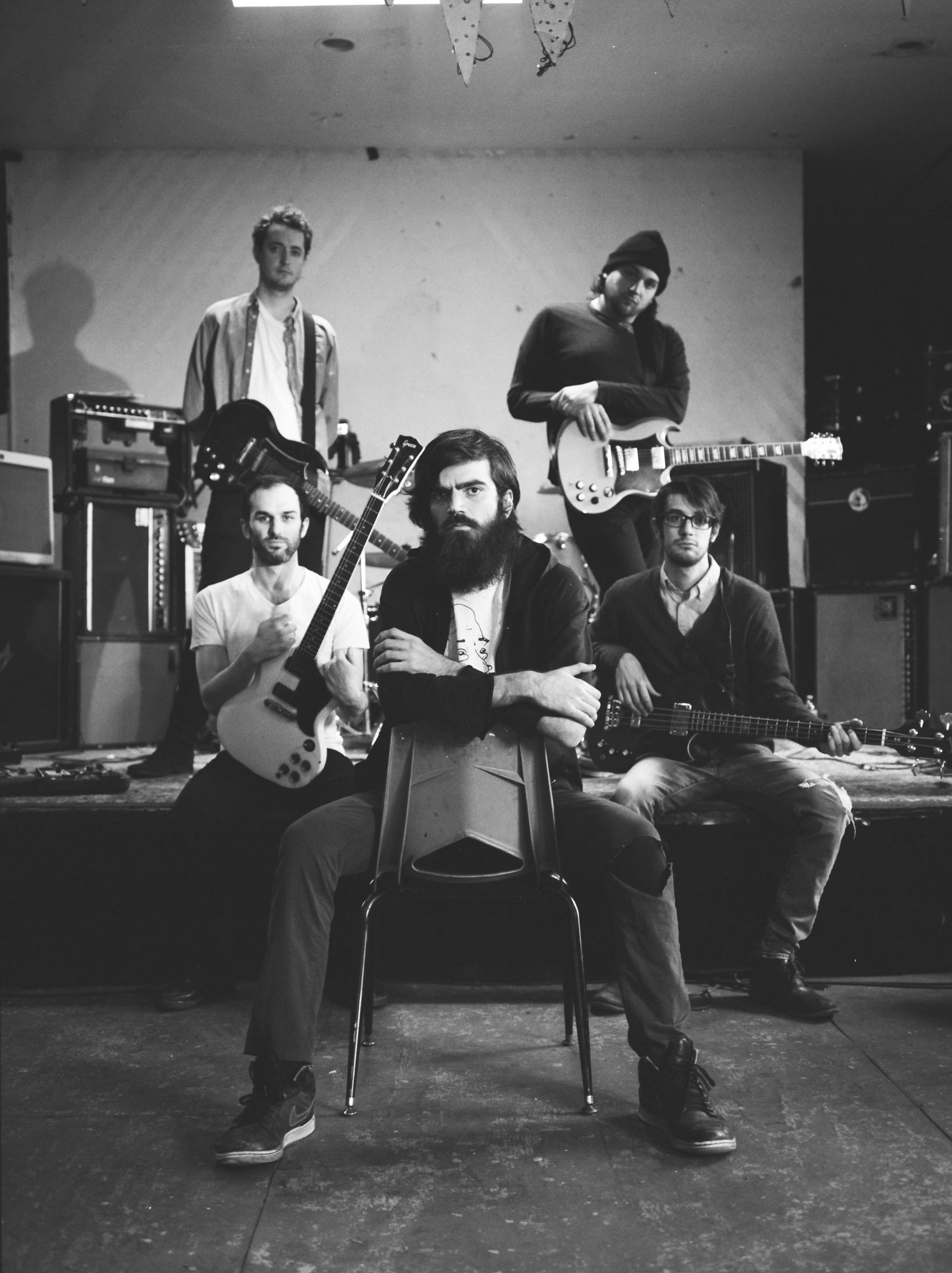 Titus Andronicus leader Patrick Stickles doesn’t think small. The band’s latest album, The Most Lamentable Tragedy, is a triple-album rock opera telling a metaphysical story involving doppelgängers, ancestral memories and romance, weaving in covers of Daniel Johnston and the Pogues along the way. Since the band’s beginnings 10 years ago, Stickles has written songs that link up in odd ways, weaving in nods not only to the group’s back catalog but also to figures who loom large in its musical lineage. Tragedy takes the metafiction to a new emotional level: Stickles experienced cycles of depression during its writing and recording, and the themes are echoed in the album’s main character. We caught up with Stickles on the roof of Brooklyn D.I.Y. venue Shea Stadium to talk about what inspired this 93-minute opus.

You launched this album with a 15-minute music video featuring several new songs. What prompted the idea?
I’ll tell you. Folks, have you ever noticed that when rock operas get reported on nowadays . . . let’s take Fucked Up’s David Comes to Life, for instance. This was the quintessential example. What every review of the album said was — because I watch all of these sites and publications like a hawk, so that I can be a shark, not to mix animal metaphors. Every stupid review, and I read quite a few, said, “This is a rock opera; the story’s completely incomprehensible, so save yourself a lot of effort and don’t even bother trying to decipher or comprehend the story, and just appreciate it for what it is: a gift of 18 great songs by the great band Fucked Up.” And that’s what it was to a lot of people, and on those terms, it succeeds very well. But it’s really disrespectful to the artist.

Once it was decided that this would be a rock opera, I wanted to get out in front of the story and make it impossible for any writer, critic, journalist or whatever to be able to claim that the story was anything other than perfectly comprehensible. It’s an allegorical, fantastical, mythical sort of tale, but there’s a comprehensive emotional through-line, or at least there’s supposed to be. Fucked Up didn’t deserve to have that happen to them. I will learn, not from their mistakes, but from their misfortune, and their disrespect at the hands of the Internet music media. You’ve got to hold people by the hand and say there really is a story.

This is a much more sprawling album than 2012’s Local Business. Was it designed as a reaction to that record?
Our third record, when I look back at it now, is the beginning of a new chapter, a new phase of the band’s career. A New York phase. A more “no click track” phase. More of a real band phase. Not a rotating door around some suburban outsider idiot, a 22-year-old nincompoop. A real band that stays together for a long time.

People who are obsessed with this narrative, that I’m out in some suburban basement now with a four-track, calling up everyone that I know who I haven’t alienated, trying to get them to come on tour with me in two months. They think I’m on the phone with every drummer that I know, saying, “Can you learn 13 songs by September the 11th to play in Philadelphia?” That’s not how it is any more. We’re a real band, we live in New York City, we’ve had 80 percent of the same guys since we made the third album, that was such a departure.

This album is not a departure from our previous one. In the same way that the second album was a logical extension and a logical conclusion to the ideas and themes of the first one, so too have we doubled down on the ideas and themes and aesthetics of the third album, and extrapolated them to and beyond their logical and illogical conclusion. And now that we’re 30 and made a 65-minute record when we were 23, doing a 67-minute record doesn’t feel like anything. And, like I said, we live in New York City. This is where Wu-Tang and Notorious B.I.G. are from. There’s hunger in the water. Everybody wants to be Number One, and so do we.

I was curious about the role of doppelgängers on the album.
A doppelgänger, in the Irish literary tradition, is called the “fetch.” Meeting your fetch forecasts your imminent demise.

Does that mean that a physical death is coming for the main character after the events of the album?
The truth is, I wrote the whole rock opera to force myself into facing certain things that would close a chapter in my life. Just like I talked certain things out on the second album, because I wanted to stop fighting people so much. Hence, I made an album about fighting, an album of all fight songs, that in the end says that fighting is pointless. Make an album of all of these songs about all of the bad decisions and bad attitudes that you can have while going through this, shall we say, manic-depressive mood cycle.

Did you have any other literary influences, as you were writing the rock opera?
My biggest literary influence on this album was the comic book Miracleman, by Alan Moore. Miracleman, and Watchmen to a lesser extent, was an introduction to me for a lot of Nietzschean concepts. He was my other biggest influence, but I came to understand most of his ideas and how they applied to my own life through Alan Moore. Alan Moore was my Nietzschean interpreter. That’s really pretentious.

They’ve led me on a journey. . . to discover the concepts that I find that pique my interest, that are relevant to my personal concerns. That whole übermensch thing, and the fact that the Miracleman comic talks about it — it would create a lot of fucked-up situations if it were real. That, to me, became an allegory for myself when I am a maniac. That’s when I did every good thing I’ve ever done: write all the songs that everybody likes; put on a wild, entertaining show; deliver a boisterous, outlandish interview — all this stuff. I can do that stuff when I’m way up, but it’s not the whole story of my life. That’s the part that everybody likes, and yet, in my personal life, it’s the part that everybody hates. It makes for a very annoying situation at home, because I can’t turn it off.

With the title of the record, you’re going back to Shakespeare’s play. When did you decide to go with that?
What a lot of people don’t realize is that Titus Andronicus, the play by Shakespeare, has a number of different extended names, one of which is The Most Lamentable Tragedy of Titus Andronicus. Which was originally what the name of the record was going to be. The thinking was that it would be a sneaky way to say, “This is our self-titled album, and yet it’s the fourth one, and so we think of this as our definitive statement.” But you wouldn’t put out an album called “Titus Andronicus” — what the fuck does that mean? How does that tell anyone about the rock opera? And it certainly doesn’t tell anyone about what I think my feelings are, you know? They’re the most lamentable. So. . . that’s basically it. It was a sneaky way to bring everything full circle and wrap a neat little ribbon around everything. Say, “This is a body of work, this is a catalog, this is a statement on this particular decade and change of one person’s life.” It’s the closest thing that we could do to a self-titled album while not having it be something that seemed like it came up 10 minutes before it had to be done.

When did you decide to work the Pogues and Daniel Johnston covers onto the record?
The greatest double album ever, in my opinion, is [the Rolling Stones’] Exile on Main Street. Even though it’s not a contest, and Zen Arcade is just as good. And that one has two covers on it: Robert Johnson and Slim Harpo. So, if they did it. . .

What was the process like of writing this album compared with its predecessors?
I had to say something that I should have been saying to myself since I was a little fucking child: You have to have discipline. This shit is work. You want to be the artist, you gave yourself this big project because you knew that this was how you were going to stay in the game — stop moping and watching Frasier. Again. You’ve seen the series, several times, in full. Don’t watch Frasier again this winter — get the guitar and do it, even if you hate it. Do it, please. This is your last fucking chance. You’re already running out of time. Play the guitar.

All my suffering, just like Buddha warned, is because of my attachment to desires. And I say, “What if it all went away? What if I hit the wall at the end of this summer and I can’t follow through on the road in the fall?” Or what if it sucks; what if it turns out I was wrong and it all is gone? What if I fuck up? What if I alienate everybody in the band by being a jerk and they all quit? Because they can, any time they want. Or what if I get depressed and I never wake up again? What if I stay depressed and they have to bring me up on stage in a wheelbarrow? And in these moments, when I say these things, I poison myself against enjoying everything I ever wanted. Because, oh no, it might not last forever. What does? Nothing in the whole world. Not the greatest joys or the most horrible sorrows. Not Ridgewood, Queens, and not Shea Stadium, and not Titus Andronicus, and not my life.

Moments are just moments. And when you have a moment of real happiness, it’s really a most lamentable tragedy indeed to suffocate what joy could be there with wishing that it would never go away. Because it’s going away.