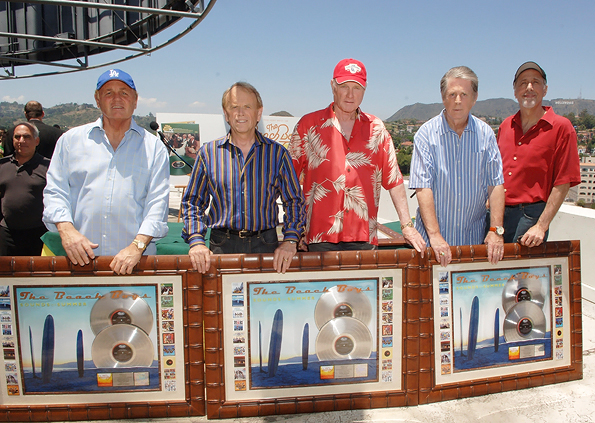 Last night I tuned into the Grammy nominations special waiting to see an “iconic group” announce their “monumental” reunion. I saw Lady Gaga sing with Sugarland. I saw a lot of Bruno Mars. I saw the Band Perry inexplicably cover Tom Petty’s “Free Falling.” I saw Usher perform with Mike Stoller and Valerie Simpson. I didn’t see anything resembling a reunion.

What happened? “There was the expectation that the artist involved and we would be ready to announce,” Grammy President Neil Portnow told the Telegraph. “We were genuine about the intention and discussion, but the time frame has moved.”

Many people thought that Van Halen was supposed to be the band, largely due to the fact that the Grammys sent out this not-so-subtle Tweet on November 3rd: “Who do u predict the reuniting band will be @ GRAMMYnoms? Does this hint make u wanna ‘Jump’ & ‘Dance The Night Away?'” This seemed to confirm beyond any doubt that Van Halen was the band, but what many people missed is that the Tweet also linked to a Hitfix story that guessed it was Van Halen. The fine folks at the Grammys merely sent out that Tweet to get people talking, and the Van Halen song titles were a reference to the HitFix prediction. They wanted to open up a whole Twitter-wide guessing game.

Unfortunately, all it did was make everyone think that Van Halen were locked in. According to industry sources I’ve spoken to, Van Halen were never – at any point –  lined up to appear at the Grammys special.

It’s hard to be 100 percent certain, but I’m extremely confident that it was supposed to be the Beach Boys. Their 50th anniversary reunion tour this summer is one of the worst-kept secrets in the music business right now. The Los Angeles Times agrees with my assessment. “Sources close to the show said that talks with the band – reportedly the Beach Boys – fell apart in the 48 hours leading up to the nomination show,” the paper reported this morning. “There’s hope, however, that the Beach Boys will still be available for the Feb. 12 Grammy Awards.”

Expect an official announcement of the Beach Boys reunion tour sometime in the next couple of months. This Grammy debacle didn’t exactly get things off  on the right foot. One can only imagine what crazy behind-the-scenes drama caused them to pull out.

Related
• The Grammys: Who Will Win in the Key Categories
• Adele, Foo Fighters, Bruno Mars Nominated for Top Grammy Awards