He began the year by calling his work a “movement.” And despite bitter missives, scandals and behavior that would be career suicide for almost anyone else in his position – his movement was a success in 2016 thanks to millions of loyal supporters. We’re talking about Justin Bieber, of course.

The 22-year-old pop sensation, who achieved Internet fame at age 13, peaked in 2016 by a number of measures. He released Purpose, his strongest artistic statement to date, while his generational peers applied for their first jobs out of college. This month, Purpose received four 2017 Grammy Award nominations, including the most prestigious, Album of the Year.

Bieber made $56 million this year. He’s the 26th highest-paid celebrity, according to Forbes‘ 2016 ranking – right behind Paul McCartney (25th) and Bruce Springsteen (24th). Bieber currently holds 14 Guinness World Records, and somehow, he managed to break more than half of them this year alone.

But for every milestone the Canadian pop star achieved, his passive-aggressive behavior grew more bizarre. In March, Bieber canceled nonrefundable meet-and-greets on his Purpose World Tour (worth up to $2,000 apiece, according to Bieber’s website) because prior instances had left him “drained and unhappy.” Two months later, he said his fans made him feel like a “zoo animal.”

The outbursts have escalated. While on tour last October, Bieber reprimanded an audience member for interrupting him by throwing her hat onstage. (“I probably don’t even want that shit,” he said, before apologizing.) In the Manchester Arena, which seats 21,000 people, Bieber grew frustrated again. “The screaming has got to stop, please and thank you,” he said tersely. Then he walked offstage.

Bieber denied that he acted out of anger. He said he opted out of performing what would’ve felt like an inauthentic experience. “All I was simply doing was wanting people to listen, to kind of hear me out a little bit,” he said.

He also banned fan selfies and deleted his Instagram account – which is like severing an artery in Bieberworld (but he’s been posting selfies via his Dad’s account anyway). During a November 29th concert in London, Bieber teased his fans who wanted him to return to the platform. “I don’t want to get my Instagram back. Instagram is for the devil, I’m sure. I think hell is Instagram. I’m, like, 90 percent sure,” he said. “We get sent to hell and we get locked in the Instagram server, I’m stuck in the DMs, trying to get my way out and I can’t. I don’t know what I’m talking about.”

But in a way, Bieber was correct about his fans wanting the real thing – even if it means no Bieber at all. Because for Beliebers, the kind of behavior that would sink another celebrity is intrinsic to the moody pop star’s allure.

“His fans want to watch a train wreck – they’re energized by it,” says Nielsen Music executive David Bakula, who studies data on pop-culture consumption. “The edgy, controversial things [Bieber] says and does only makes his fans more passionate.” Bakula likens Bieber’s fans to those of Miley Cyrus, Kanye West and Britney Spears. In all of those cases, Bakula says, the quality of the artist’s music is still high. “You don’t get the levels of fan activity [as these artists] with just being controversial.”

Purpose was Bieber’s mea culpa following a dark 2014. The album’s message was “Sorry,” but more importantly, the music had to be irresistible. “Bieber was a walking social-media joke,” Bakula says, referring to Bieber’s numerous scuffles with the law (drunk driving, assault, vandalism). The PR nightmare culminated with two damning online videos. One revealed a teenage Bieber singing racial slurs to the tune of his hit “One Less Lonely Girl.” The footage was ugly. After all, this wasn’t exactly ancient history. Bieber issued a heartfelt apology, but the situation called for massive damage control, and surprise-releasing a 42-minute audiovisual album a year later fit the bill.

Before November 19th, 2015, Bieber’s entire catalog volume was 715,000 units (a composite of digital and physical albums, permanent downloads and audio and video streams), according to Nielsen Music. When Purpose dropped, Bieber doubled that number in a single week. Purpose rocketed Bieber to 2.9 million units, which he maintained through 2016. (“The numbers just don’t go back,” says Bakula.)

Bieber needed this kind of win to stay relevant – and solvent. “This is an artist that, before this album came out, wasn’t really blowing up on his prior stuff,” Bakula says. “For [Bieber] to come out with an album and have those kinds of numbers – and then sustain them throughout 2016 – that indicates tremendous fan engagement with a really good album.”

Given how much better Bieber was perceived after Purpose, it’s odd that he barely appears in the album’s accompanying visuals. His absence gave videos such as “Sorry” a kitschy appeal that was part flash-mob, part karaoke-video filler. “Sorry” was the most-viewed music video in the United States (2.1 million views) and worldwide (1.8 billion views) in 2016, according to music hosting service Vevo. No other artist this year had more than one video in the Top 10. Bieber had three. 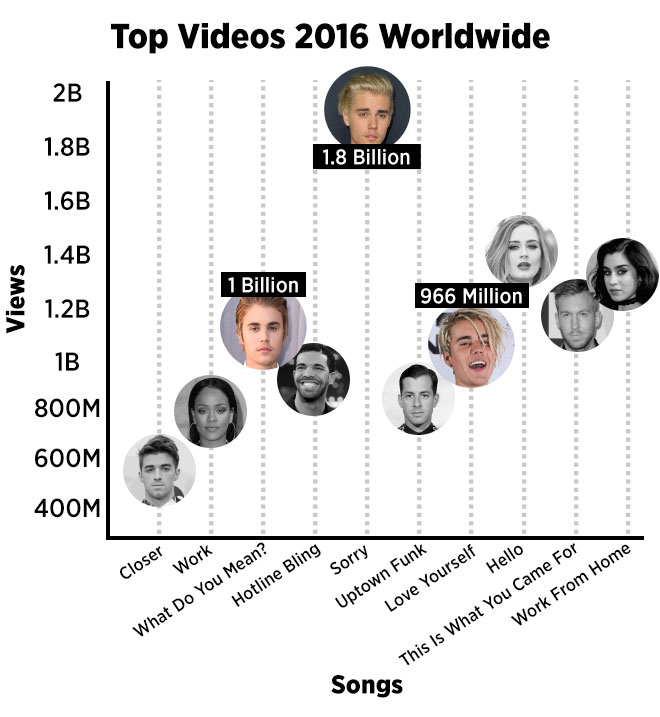 “[The Purpose videos] spoke to things that Bieber’s fans deem important, like sharing and creating content,” says Tom Connaughton, a content executive at Vevo, which debuted Purpose. Bieber is currently the most-watched artist on Vevo and the first artist ever to achieve 5 billion video views in a single year, which Connaughton attributes to Purpose‘s abundance of choreography.

In 2016, dance was pop’s great equalizer. In the United States, producer-rapper Silento’s Internet phenomenon “Watch Me (Whip/Nae Nae)” edged Mark Ronson’s radio smash “Uptown Funk” – a song performed at the 2016 Super Bowl – out of the top 10. Newcomers Fifth Harmony trumped tastemakers like Drake, Rihanna and Calvin Harris with a construction-site get-down (“Work From Home”) that outranked “Hotline Bling,” “Work” and “This Is What You Came For,” respectively, in views worldwide and in the U.S.

“Online video has a multiplying effect,” says Connaughton. People are twice as likely to share a music video on social media than an audio track, according to Vevo data. “So when videos incorporate something that’s entertaining and replicable – like a dance – viewers will not just share content, they will be required to keep re-watching the same clip multiple times.” Vevo data also show the the majority of its users enjoy sharing videos and are more likely to re-share a video that’s been shared with them.

The method worked for Purpose. The one celebrity cameo in the intro of “Where Are Ü Now,” (featuring Jack Ü members Skrillex and Diplo) quickly gives way to a grocery-store dance off that looks like it could have been shot, directed and cast by high school film crew. And that’s the point. The most-watched parts of Purpose are the parts that show people and their friends. All that’s required to participate is a smartphone and a YouTube account.

So where is Bieber in all of this? His absence from the videos coupled by their huge success implies that this was a great year for Justin Bieber, because his fans have more say, more impact and more control over the Bieber product than he does. And for careful viewers, Purpose reveals the complicated duality of being both a growing business and a growing adult in public – another reason why it was Bieber’s richest album yet.

The few moments Bieber appeared in Purpose, he shunned the spotlight. He’s shown flanked by three burly men in black T-shirts, walking away from the camera. Later, Bieber is stands alone on a lush mountain peak, his back still turned on the camera. At the very least, the album suggests that for Bieber, creating distance between himself and his fans was something done, well, on purpose.