Courtney Barnett is slouched in a swivel chair, eating Cheetos for breakfast and bullshitting with her band about differing global connotations of the word “cunt.” “People react very strongly to ‘cunt’ in America,” the Australian-born indie rocker observes. “Yeah!” says her bassist, a wild-eyed dude with caveman hair who goes by the nickname Bones. “We were playing a show once, and I called our openers a bunch of sick cunts — that might have been a mistake. The crowd was like . . .” He falls into an awkward silence and throws around some offended sidelong looks.

Barnett chuckles. “ ’Sick cunts’ means, like, ‘cool dudes’ in Australia,” she explains. It’s around 9 a.m. in Los Angeles, and she’s got on basically the same clothes she wore yesterday: black jeans with a dime-size hole below the left knee, battered Doc Martens and a grungy jean jacket she’s worn more or less constantly since Levi’s marketing reps gave it to her for free last year. (“I don’t have a lot of clothes,” Barnett says.) Pinned to the pocket is a button announcing her solidarity with the Friends of Leadbeater’s Possum, an endangered Australian marsupial. Bones brings up another story of onstage obscenity: the time someone in Philadelphia yelled out “Cocktopus!” for no clear reason, and Bones, seizing the moment, mimed himself jerking off an eight-pronged penis. Which he does again now. Barnett smiles, rolls her eyes and sleepily taps some fluorescent orange dust into her mouth.

This is the touring life of one of rock’s most beguiling young stars and deftest lyricists. Barnett, 27, is a master of small-bore observations that smudge the line between profundity and banality, set atop swaggering garage riffs. The geographies Barnett narrates in most songs are tiny — drinking wine with friends in a living room; regarding cracks in a plaster wall with the interpretive scrutiny of a palm reader; riding the Epping mass-transit line in Melbourne. And yet she somehow makes her world feel improbably big.

Late in 2013, Barnett bundled her total recorded output — two EPs — into a full-length release called The Double EP: A Sea of Split Peas, which earned rave reviews, got her booked on The Tonight Show Starring Jimmy Fallon and landed her a Coachella slot. Barnett’s breakout hit, the video for which has 1.2 million YouTube views, was a psychedelic romp called “Avant Gardener,” which tells a true story of laziness and front-yard weeding that ends in a near-death experience: Hopes of growing radishes gave way to respiratory distress, a panic attack and an ambulance ride with EMTs. Barnett fills the lyrics with deadpan humor, train-of-thought Pulp Fiction references and clusters of playful rhymes: “I’m breathing but I’m wheezing/Feel like I’m emphysemin’/My throat feels like a funnel filled with Weet-Bix and kerosene.” Suspended within the song’s shaggy-dog haze, however, are deceptively dark themes of thwarted ambition and the paralyzing fear of wasting one’s life.

Right now, she’s in the control room of KCRW, a Santa Monica public-radio affiliate. The influential wake-up show Morning Becomes Eclectic has invited her to take over its airwaves with several songs from her fantastic official debut album, Sometimes I Sit and Think, and Sometimes I Just Sit. “I feel delirious,” she says. Yesterday, she landed here from Sydney and was driven immediately to the studios where Ellen is taped, and where Michelle Obama was the marquee guest. “We got patted down — they searched all our bags,” says Barnett. “The FBI ran background checks on us. It was pretty wild.”

Barnett narrates this in a pleasant daze — she’s as sedate as Bones is rambunctious, which she acknowledges makes her an unlikely frontwoman: “My ideal job would have been packing boxes in a fucking basement for the post office, or stacking supermarket shelves at midnight.” But she has a sales-closing charisma that she can turn on when she chooses. In her early twenties, she worked hawking Adidas and Nikes at a Melbourne shoe store. “I was pretty good at doing the bullshitting salespeople can do,” she says. “I’d do it based on the person. If they were rude and obviously rich, I’d tell them what they wanted to hear. But if it was someone really nice, talking about their weekend plans and being a normal human being, I’d be like, ‘Don’t spend $300 on fucking shoes. They’re going to fall apart anyway.’ ”

A producer indicates that it’s time to play. In the recording room, Barnett joins Bones and her drummer, Dave Mudie, tuning her guitar with nine effects pedals arranged at her feet. As she plays, she closes her eyes or casts them downward, periodically smushing her lips into the microphone so that it appears to be supporting her entire weight.

On Sometimes I Sit and Think, one of the challenges Barnett gave herself was to write about the world beyond her skull — narrating greater cataclysms than gardening mishaps. On a loping track called “Dead Fox,” she connects roadkill to animal rights to industrial farming to contemporary capitalist alienation. As she plays it now, Barnett smiles occasionally at microscopic flubs: gently botched strums or missed notes that sound fully of a piece with her winningly ramshackle aesthetic, and which cut against her lyrics’ underlying sense of gloom and anger.

In Australia, Barnett shares a home with her girlfriend of four years, the singer-songwriter Jen Cloher. The pair’s romantic partnership doubles as a creative one: Barnett and Cloher run a small label called Milk! Records that Barnett founded in her bedroom, and in addition to the label, Barnett has played alongside Cloher as a guitarist and duettist. Well after Barnett’s career took off, she still held on to her job tending bar at Northcote Social Club, a local spot where she and her friends perform a lot — she finally let it go, albeit with the reluctance of someone who knows the misery of being broke and is all too afraid that it might happen again. 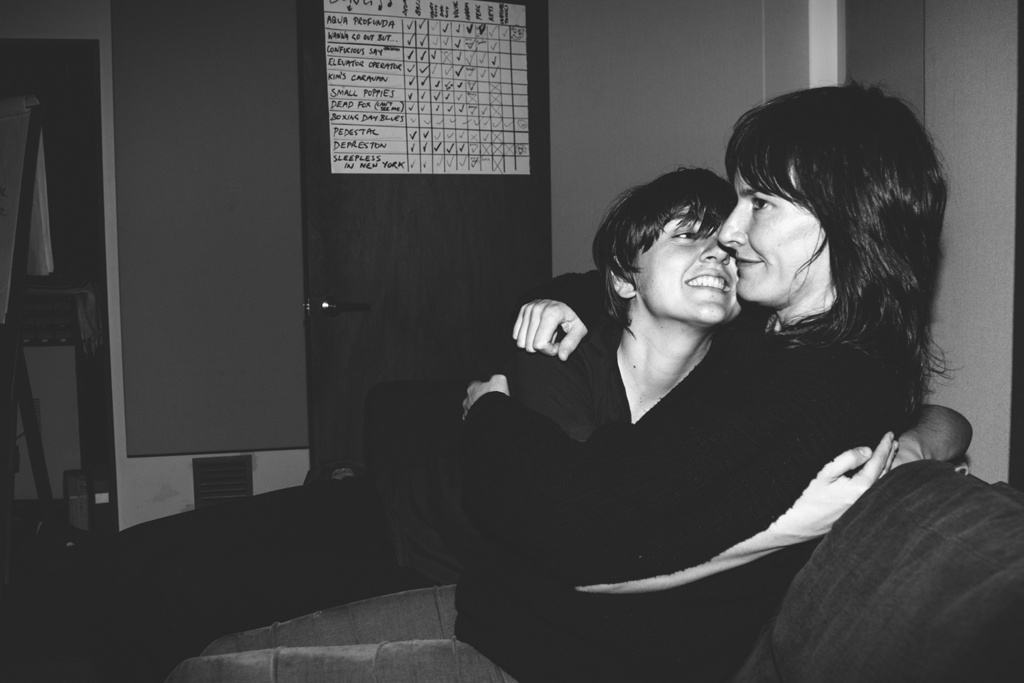 Barnett was born in Pittwater, a seaside area an hour from Sydney, the daughter of a former ballerina mom and a graphic-designer dad. “It was a surfy area, but we lived out of town, in the bush — a one-story house with big trees everywhere,” she says. “Me and my brother would ride bikes, play basketball, computer games, play commandos in the bush.” She danced ballet, played tennis and started playing guitar as a tween, influenced, to varying degrees, by Hendrix, Cobain and “Smoke on the Water.” “I remember writing a song when I was 12 or something, called ‘You’ — it was talking about eyes and hair, exactly what you’d imagine a love song to be. I liked boys and had boyfriends, but those kinds of feelings were just what I’d read about. It wasn’t really me.” In high school, Barnett says, “I was the kid who played guitar and read lots of books.” The year before she graduated, she got together with her first girlfriend. “We were secretive about it because of high school and being afraid of what people would think. When the other kids found out, they were kind of weird at first, but I feel pretty lucky because I was accepted. There are people in the world who get killed for that stuff.” When it came to telling her parents, “I didn’t for, like, a year, and when I finally did, because I broke up with my girlfriend, I was really scared. And they were like, ‘Yeah, we know!’ ”

Barnett’s desire to wring resonance from the seemingly mundane was already in place at the University of Tasmania, where she first wanted to be a fine-art photographer (“I was attracted to Nan Goldin realism: images of people doing their thing”). But after two unsatisfying years, she dropped out, deciding to focus on music-making, and decamped to Melbourne. Barnett says she has suffered from clinical depression, and around this time her condition was at its worst. She took antidepressants. What things made her unhappy? “They’re never real reasons,” she says. “Just, you know, general kind of esteem and stuff. I don’t want to go on about it, but I basically wouldn’t leave my room, and I was unemployed for quite a while, and it became a cycle of, um, one leading into the other. I just couldn’t see the point in anything — that’s what it always came back to.”

She talks about her brain as if it were a machine she can’t turn off, for better or worse. She recalls trying to meditate not long ago, on the encouragement of Cloher. “I got so angry and frustrated from it, because I couldn’t stop thinking, and you’re supposed to clear your head of thoughts.”

What Barnett learned to do, with time, was accept, rather than suppress, the overthinking part of herself: filling journals with ruminations and drawings, then mining those pages for material, shaping her sprawling entries into her slightly less sprawling verses, then setting them to guitar. “Part of the point of songwriting for me is that I can work through ideas and issues and emotions — clarify them and make them better,” she says. “With depression, it’s so easy to divert it or take drugs to alleviate it. I think it’s important to actually feel the pain.”

After the performance, Barnett, Bones and Mudie drive to an art gallery in an industrial corner of downtown L.A. The gallery’s front room is lined with pen-and-ink drawings of chairs that Barnett made while trying to figure out the cover art for Sometimes I Sit and Think. The chairs were “a literal representation of the album title,” she says, “but also a childhood memory. My dad was always collecting vintage chairs and shit, intending to do them up, but he’d have a bunch of them hanging around the house at any given moment, not doing anything.” One room over, roadies are setting up a carpeted stage where, tonight, Barnett will play a show for 200 or so fans, friends, and VIPs like Moby. “It comes out of our promo budget,” she says of the show. “I figured this would be a lot cooler than buying some ads for the subway.”

There’s time to kill before soundcheck, so we walk to a nearby bar beneath a concrete overpass, where we order micheladas. She talks about how overjoyed she was when “Avant Gardener,” which has nothing resembling a traditional chorus, took off the way it did. “It feels like this big joke I pulled on everyone,” she says. She often approaches writing a song as a specific exercise. She points at her beer: “I ask myself, ‘Could I write a song about this drink?’ It becomes a challenge.”

We have a couple of rounds, then walk back toward the gallery. When we come to an intersection, Barnett looks the wrong way and nearly gets creamed by a pickup truck accelerating from our left. She laughs and regains her train of thought as we enter the gallery. The drawings are a motley, misshapen assortment of chairs that evoke the artist David Shrigley, with brief captions (chair that needs new cushion). “I liked the idea of being surrounded by all these shapes and structures,” she says. “All this broken, beautiful stuff.”