In the video for Beyoncé and Jay-Z‘s “Apeshit,” the first visual from the pair’s surprise joint album Everything Is Love, the two stars romp through the Louvre in Paris, seizing center stage in a high-culture palace that – like most Western art museums – historically made little room for non-white artists.

Some of their mission involves the strategic highlighting of non-white images already in the Louvre. Beyoncé and Jay-Z rap in front of an Egyptian sphinx, and in galleries filled mostly with neo-classical French paintings – white artists, white subjects – the camera singles out black faces. (The video is directed by Ricky Saiz, who also helmed the “Yonce” video from Beyoncé’s eponymous 2013 album.) Viewers catch brief glimpses of a pair of black figures in Paolo Veronese’s painting “The Wedding at Cana,” where Jesus turned water into wine, as well as a quick look at Marie-Guillemine Benoist’s “Portrait d’une Négresse,” a depiction of a black woman staring guilelessly back at the viewer.

But the Where’s Waldo? moments highlighting black figures are fleeting – the possibilities for this in the Louvre, or any major Western art museum, are limited from the start. So Beyoncé and Jay-Z set about interjecting blackness into a space that has never placed much value on it, claiming one of the centerpieces of European culture with gleeful defiance. They frequently film themselves moving in opposition to the frozen stillness of paintings by Jacques-Louis David, a French neoclassical artist whose work – like “The Oath of the Horatii” and “Madame Récamier” – invokes the Greco-Roman tradition. 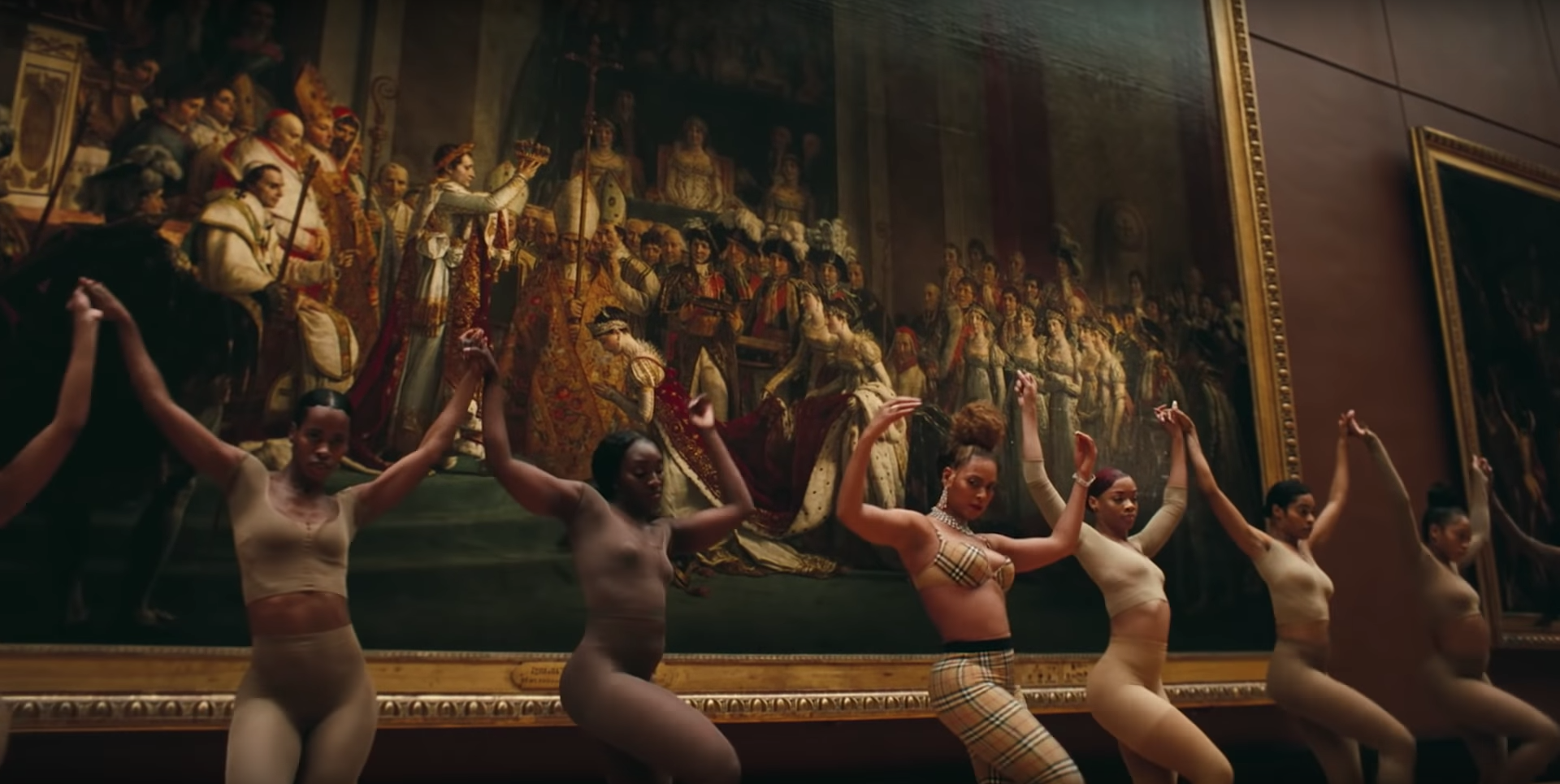 Much of the potency of the “Apeshit” video comes from the contrasts drawn between the “white” art on the walls and the black women on the gallery floors. In front of David’s “The Consecration of the Emperor Napoleon and the Coronation of Empress Joséphine,” a court scene of relentless white extravagance, Beyoncé and eight black dancers hold hands and begin to dance. It takes just a few synchronized sashays to upstage David’s massive painting, replacing an ornate symbol of white authority with a celebration of black bodies in motion. The Louvre’s stature depends on people believing that “The Coronation of Empress Joséphine” is the art, but the eye tells a different story – hanging behind Beyoncé and her dancers, the painting is reduced to wallpaper.

Throughout the “Apeshit” video, Beyoncé and Jay-Z repeatedly upstage some of Western classical art’s most famous images in one of its central sacred spaces. Beyoncé holds a series of chopping micro-poses with her hands before Saiz cuts quickly to an image of a distressed character, hands held up to shield her head, taken from another David painting, “The Rape of the Sabine Women.” The placement of the hands connects the two frames, but Beyoncé’s is virile, aggressive and in charge, while David’s figure seems merely fearful. 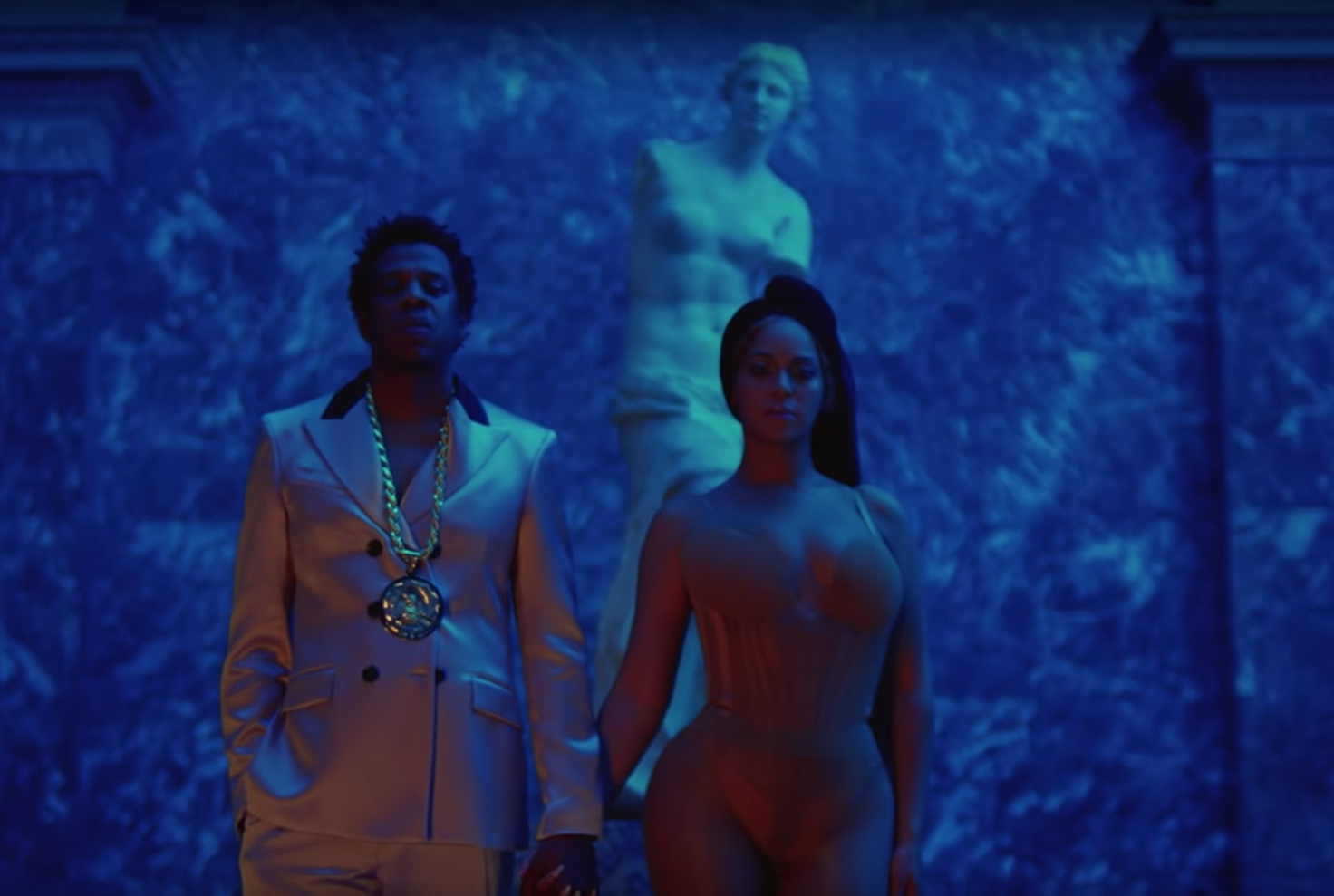 Later, Beyoncé and Jay-Z stand in front of the Venus de Milo, one of the Louvre’s most well-known statues, the kind of white marble creation that is synonymous with European high-art. The statue is inert and famously arm-less; Beyoncé is fluid, fierce and in perpetual motion.

It’s not only Beyoncé who eclipses the art. Just a few scenes before the singer’s victory over Venus de Milo, a line of her dancers sway back and forth in the foreground while another white marble statue, “The Winged Victory of Samothrace,” looms inertly behind them. Everything Is Love‘s cover image, which also comes from the “Apeshit” video, casually one-ups the “Mona Lisa”: A dancer carefully tends to a black man’s hair while Leonardo da Vinci’s beauty languishes in the distance. 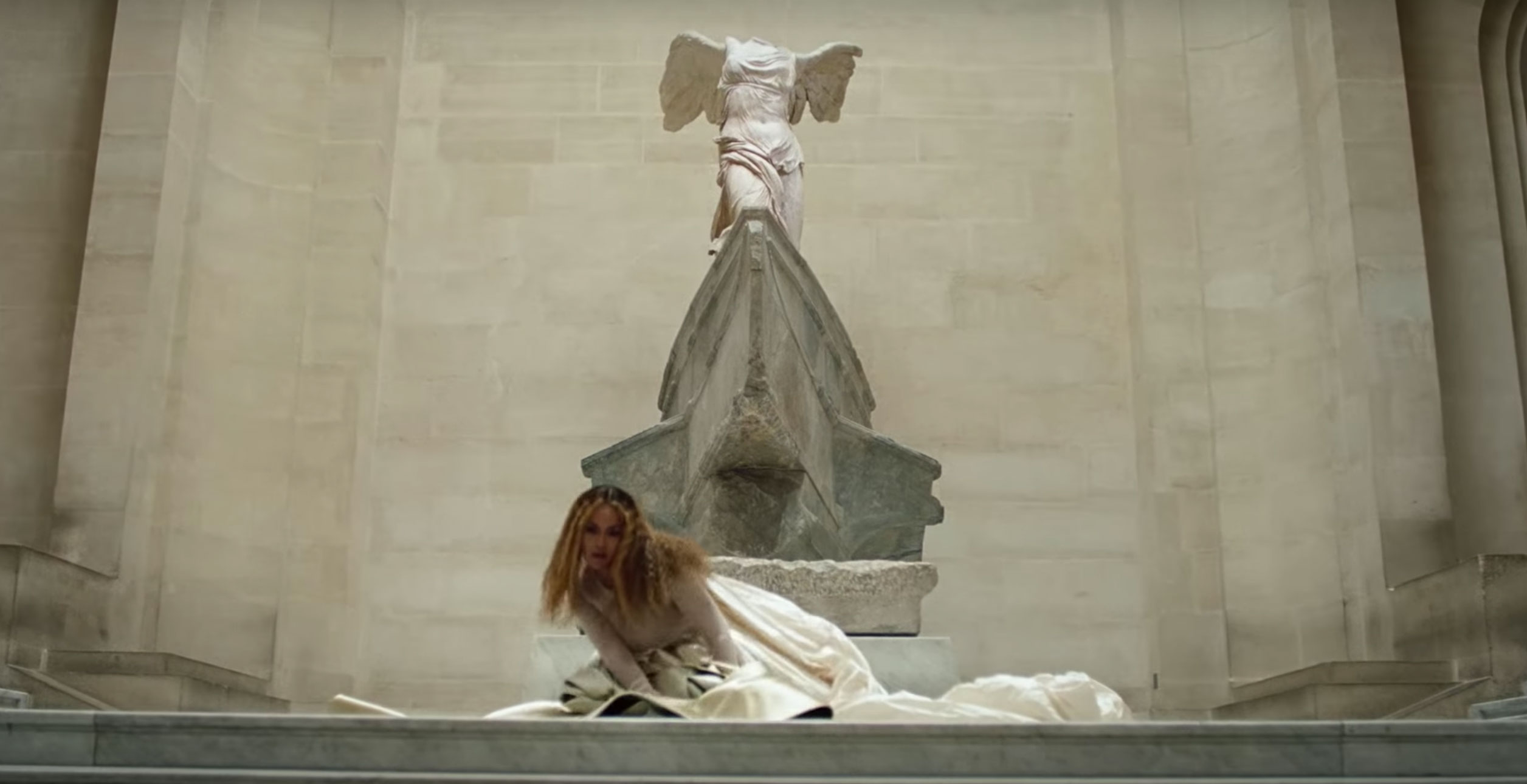 Jay-Z’s role in the new clip is more limited – the rapper stands around in pastel suit jackets, gallantly letting his wife do all the work, wrecking frame after frame. He relies on his lyrics to make the points that Beyoncé and her dancers drive home visually. The beat, co-produced by Pharrell Williams, splits the difference between the zaniness of Rae Sremmurd’s “Black Beatles” and the crushing momentum of Future’s “Move That Dope;” Jay-Z raps quickly and cleanly, often while standing in front of Théodore Géricault’s painting “The Raft of the Medusa,” throwing darts at traditional bastions of white-ness outside the museum world, including the NFL and the Grammys. When he raps, “I said no to the Super Bowl / You need me, I don’t need you,” the camera flashes to a line of young black men taking a knee, alluding to Colin Kaepernick and other players’ decision to kneel during the national anthem to protest police brutality.

As the “Apeshit” video comes to a close, Beyoncé overpowers the art once more, happily thrashing around in a poofy white gown in front of “The Winged Victory of Samothrace.” The final shot in the clip is one long pan towards Beyoncé and Jay-Z, who stand nonchalantly in front of the “Mona Lisa” wearing plush suits of purple and aquamarine, respectively. The camera settles on the famous painting itself; by now, any viewer knows that’s the least interesting thing in the frame. 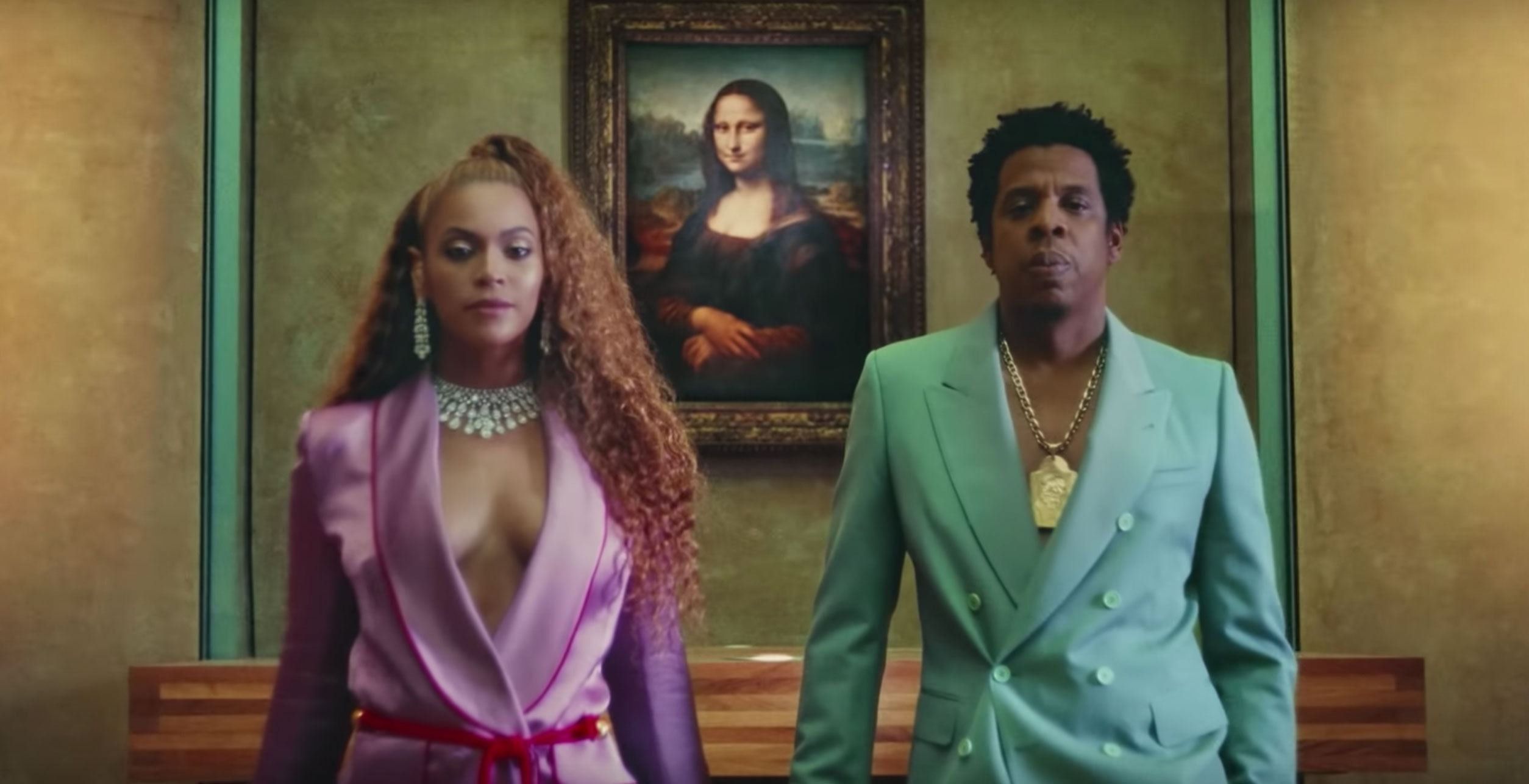