“Check, check, check, hi, hello… Thank you so hard.” The sturdy redhead behind the mic is Joshua Homme, the singer-guitarist-leader of Queens of the Stone Age, sitting in the shadows as he prepares to record another weekly episode of The Alligator Hour, his show for Apple’s Beats 1 Internet radio station.

Barely 20 minutes earlier, Homme rolled up on a Harley to his private Pink Duck studio in Burbank, California, where Alligator Hour executive producer Collin Walzak waited with a laptop. Upon arrival, Homme was immediately rattling off song titles and names of female artists, still formulating the theme for the week. His studio manager hands him an iced coffee.

“I think instead of all girls,” says Homme of the plan for episode seven, “we’ll do cool chicks and bad boys.”

The Alligator Hour is one of several artist-hosted programs on Beats 1, which broadcasts a marquee lineup of exclusive shows from Dr. Dre, Elton John, Drake, Pharrell, St. Vincent and Run the Jewels. The endeavor was the idea of Beats 1 creative director Zane Lowe, who quit London and a primetime gig at BBC Radio 1 to realize a revolutionary idea from Trent Reznor and Jimmy Iovine: create a worldwide live and curated radio station for the new Apple Music on-demand streaming service.

“I like the chance to feel like I’m infiltrating a little bit,” says Homme, who once spoofed mainstream rock radio with between-song skits on Queens’ 2002 LP, Songs for the Deaf. Committing to a weekly hour-long show now is a bit ironic, he admits, as the gig is essentially his “most job-type-job” since he last worked desert construction in his twenties. He opened one show in a Seventies mood with the sleazy funk of “Jungle Fever” by the Chakachas, the Sex Pistols‘ “Submission” and Donna Summer‘s “I Feel Love.”

“Bang, does that feel good?” Homme said into the mic that week. “I knew it would. It’s a sexy beast of a show.”

He was originally set to co-host a show called Sunday School with friend Annie Clark of St. Vincent, but their schedules and locations were too scattered. For The Alligator Hour, Homme drew crucial inspiration from the freeform whims of L.A.-based DJs Rodney Bingenheimer and Sex Pistols guitarist Steve Jones. “It is a real cool way to sort of reveal yourself,” Homme says. “As a kid, I used to make mixtapes for girls or for friends. It really did tell somebody who you were, how you felt and what you meant. I like that reveal of this.”

“It is a real cool way to sort of reveal yourself. As a kid, I used to make mixtapes for girls or for friends. It really did tell somebody who you were, how you felt and what you meant.” —Josh Homme

The central idea was to replace the icy algorithms of too many terrestrial radio and streaming services with the guidance of a human DJ, especially useful in an age of near-universal access to an overwhelming ocean of music. “It’s not necessarily polite and safe, but it’s got a point of view,” says Reznor.

The mantra from Iovine was simply, “Don’t be boring,” and he repeated it enough for Lowe to know the boss was serious. So Lowe established a forward-leaning, freeform format similar to the one Reznor always admired during his visit’s to Lowe’s U.K. show. Utilizing studios in L.A., New York and London, Lowe packed the schedule with rock and pop royalty.

“I knew Trent was there; I knew Zane was there; I knew what they were trying to do,” says Homme. “They’ve been given the reins to try to make art. It became a pretty easy sell. There’s not a bunch of dough there. Just do it.”

It was innovative and risky, with colleagues warning Lowe that rock and rap artists were too restless to maintain a radio schedule. “I didn’t have another plan,” says Zane, recalling the countdown to the June 30th launch. “It was all or nothing.”

“The first week I listened to it go out,” Lowe recalls of the early days, “there was a level of joy and relief: ‘Oh my God, Elton sounds amazing! He’s so engaged! He’s really broadcasting. He gets it!'” 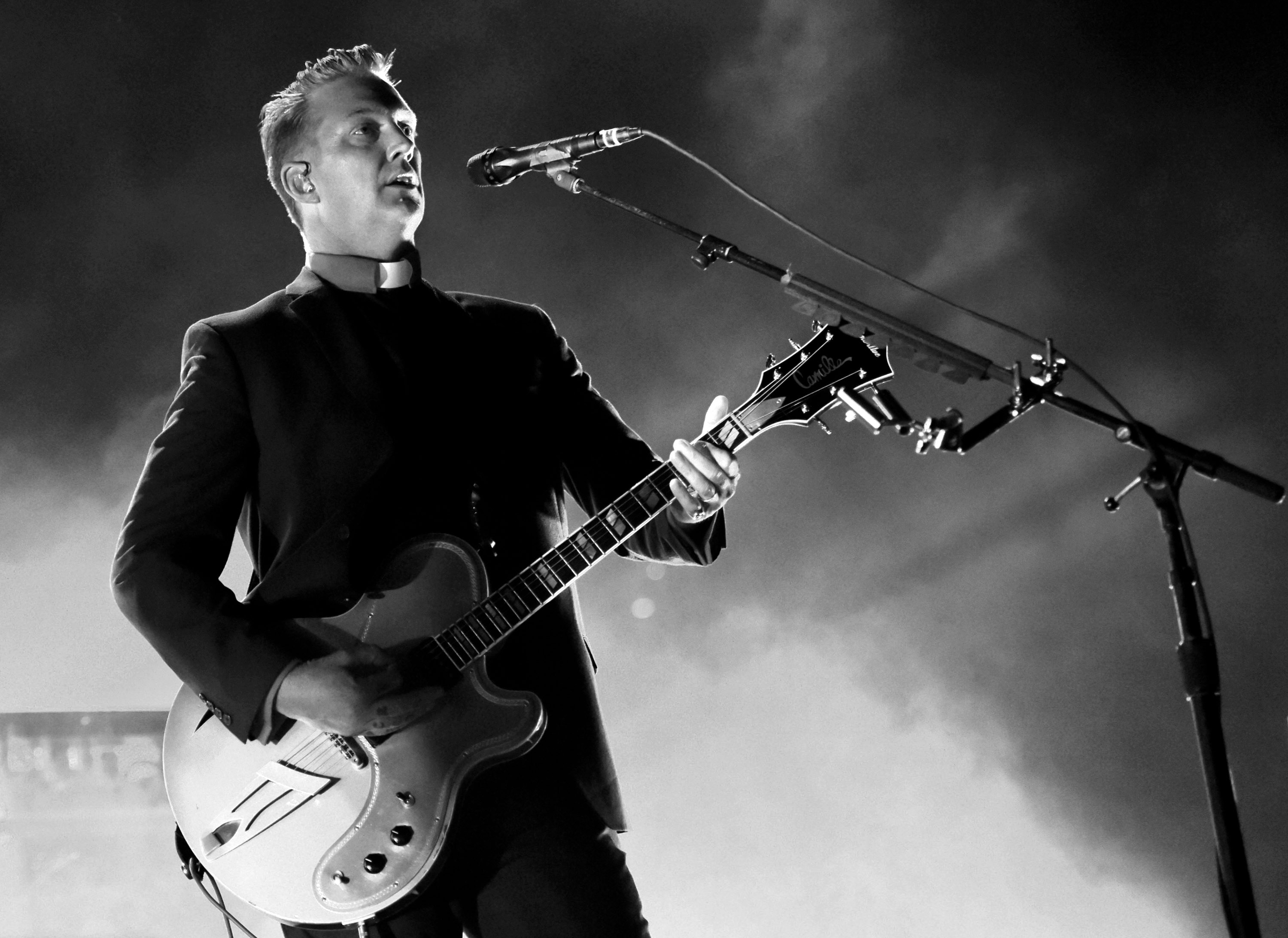 This isn’t a situation where a host records 10 song intros and then hands them off to a producer to piece a program together; these artists are the hands-on creative forces behind their shows. Run the Jewels and Drake have both introduced exclusives on their weekend shows, while other artist-hosted sets are as distinctive as their music: Elton John’s Rocket Hour begins the week on Monday nights, mixing classic tracks with forward-looking new music. St. Vincent’s Mixtape Delivery Service on Tuesdays is concept-driven, with Clark creating each show by request from a listener in need of a soundtrack to a current moment of drama or joy. Homme’s show is intimate and surreal, while Dr. Dre’s The Pharmacy is an intricately produced soundscape that Lowe calls “blockbuster broadcasting, like if Spielberg made a radio show. It’s ridiculous.”

Iovine was not surprised. “Most artists have one thing in common: They love and are passionate about music, and it means everything to them,” says the Apple Music head. “You pick people who have this great love for music. The days of getting really talented people and telling them what to play, for the most part, is dead. We’re giving people shows and letting them create their world on it. They seem to be having a wonderful time with it.”

Homme has a full schedule of plans for the rest of the year with various recording and touring projects, including a new album with Eagles of Death Metal, but finds himself obsessing over songs to play on his radio hour. He carries an evolving list of tracks on his cell phone: Leather Nun, GBH, Old 97’s, LCD Soundsystem, Ennio Morricone, Howlin’ Wolf, Bowie, Black Flag, Dean Martin. Sometimes he can be spotted blasting Depeche Mode on his motorcycle, or thinking hard about which jarring moments of death metal or hardcore to toss into the mix.

“I feel the need to do that once in a while — to poke someone to make sure they’re awake. Or make sure they’re a little annoyed. I don’t know if that’s a great thing, but it’s a thing,” Homme says. “I realize I have a list of things I need to play before this is over.”

Pharrell and longtime friend Scott Vener co-host OTHERtone every other Sunday. “Our ambition collectively is just to continue to discover songs and sounds that make people feel things,” says Pharrell. “Apple was smart enough to put that platform together and allow so many of us to continue to express ourselves. Our creativity is so much bigger than just ourselves. Sometimes it’s just sharing. There’s a lot of creativity in sharing.”

Vampire Weekend‘s Ezra Koenig, host of Beats 1 show Time Crisis, is learning as he goes. Growing up in New Jersey, he remembers being deeply bored by commercial radio but finding musical inspiration in legendary freeform station WFMU, an outlet he hopes to emulate. His first show opened with Abba‘s “One of Us” and roamed through Earl Sweatshirt, Rihanna and lots of Billy Joel. The episode also included an interview with actress Rashida Jones that included her recollection of being bitten by Michael Jackson‘s pet chimp, Bubbles, during a childhood visit with the King of Pop.

“I can’t say conclusively that it works,” Koenig says with a laugh. “My feeling with the radio show is that it’s chill and it’s fun. There’s definitely going to be something a little bit random about a show that I do because I’m not a professional DJ with a vision of how I want to take music on the radio. It’s naturally going to be a bit stream-of-consciousness in the programming. I don’t want it to be jarring or annoying to listen to. I’ve got to figure it out little by little.”

Connecting all these shows is Lowe. Back in the U.K., he was a well-established force, and his on-air enthusiasms could be divisive: contagious to some listeners, off-putting to others. He swears he’s not like that over breakfast with the kids, but describes himself unapologetically as a committed fan of music. Homme says Lowe has “gone to bat for Queens 50 or 60 times.” And rapper-producer Q-Tip, hosting Abstract Radio every Friday night, says, “I like his energy.”

“All these artists were approached because I thought they would be very compelling in a broadcast sense and would have great stories to tell,” Lowe says. “Pharrell, the way he describes music is like liquid, you know? Q-Tip’s one of the most impassioned, knowledgeable people about music I’ve ever met. When he said yes, I just knew this show is going to be amazing. These one-hour shows are full of freedom.”

“These one-hour shows are full of freedom.” —Zane Lowe

Back at Pink Duck, just outside the control room door is a rack of electric guitars and posters of the Distillers and Spinnerette, bands led by Homme’s wife, Brody Dalle. Hanging from a cabinet are marionettes that EODM frontman Jesse Hughes brought back from Prague. A pair of swords lean nearby, also left by Hughes. “I’ve got more junk and more swords,” says Homme. “I’ve got four swords, which is five too many.”

The song list is set and beginning to roll out, including the host’s own “Powdered Wig Machine,” a Desert Sessions collaboration with PJ Harvey. “It’s so underground, you need a shovel to hear,” Homme jokes. He adds an obscurity called “Get Down Goblin” by Jan Terri, a bit of outsider pop from the Nineties that sounds like it’s from the Eighties. “You’re not supposed to chase people away, but I just have to do this,” he says with a laugh.

Once the show begins, Homme’s voice slips into a purring near-whisper. He spins “Total All Out Water,” a driving electronic song from Add N to (X) from 2002. Recording has begun, and he leans into the mic.

“Hello, boys and girls, it’s The Alligator Hour, and I am your host and you are my audience and we’ll always have that, at the very least. Today’s show is about cool chicks and bad boys. And I hope that you are at least one of those things.”