Although he’s most commonly associated with the plains of Oklahoma, Woody Guthrie spent the last 27 of his life in country’s biggest urban area. “Nobody seems to know Woody ever lived in New York,” says Nora Guthrie of her father. “As I was working on the archives, I was totally surprised at how many songs he had written in the city. I figured if I didn’t know much about it, not a lot of other people did either.”

Come September 23rd, many of those songs will be released in My Name Is New York, a three-disc compilation that pairs tracks Guthrie wrote about his adopted hometown with informal interviews featuring Pete Seeger, Ramblin’ Jack Elliott and Nora and Arlo Guthrie. Below listen to an exclusive stream of the title track, a previously unreleased demo, and read our conversation with Nora, which includes more info about the forthcoming LP and her father’s time in NYC.

When did you come across this recording of “My Name Is New York”? Are there many more unheard demos like it, or is it rare to unearth a previously unheard Woody recording these days?
Believe it or not, it wasn’t until I was in my forties that I first became aware of this song. That’s when I was unpacking all these boxes of his things and creating the archives. It blew my mind. Woody’s publisher, TRO, sent me copies of all the tapes of songs he had sent them. A lot of them he had never recorded. So, yes, there are more, but these are publisher’s demos. Woody would put them down on tape at home as he was working on them. You can almost hear the pages turning as he goes through the lyric, and the sound of the pencil scribbling revisions.

I doubt if he ever meant for anyone to hear his recording of “My Name Is New York,” but I felt that the lyrics were so stunning, I decided to release it publicly. I remember that after September 11th, I had wished we’d had a cover of the song because it’s so anthemic for the city.

The song really gives you the impression that the city was very important to Woody. What do you think he loved about New York?
His natural timing was slow, very easy going, Western plains styled. NYC kicked him into a higher gear. The people he met here – Alan Lomax, Pete Seeger, my mother Marjorie – made sure things got done, not just talked or dreamed or sung about.

Songwriting became his job, a description he was as proud of using as any songwriter in the Brill Building might have been. Only differences being, he was choosing what he wanted to write about and he wasn’t getting paid to do it. My mother would get really pissed at him if he didn’t apply himself and write three to five songs a day. She’d say, “Suppose the guy who builds the bridge decides ‘Nah, I don’t feel like building that bridge today.'” He had to be like everyone else in the city – every secretary, every construction worker, every fruit-stand seller – get up early, brush your teeth and get to work.

If Woody had been healthy during the Sixties folk revival in New York, what role do you think he would have played?
My first impulse is to say that he would have played a role similar to Pete Seeger’s. But then again, they were so different. Pete didn’t smoke, curse, drink or womanize, a perfect role model for all the young folkies at the summer camps and universities in the Sixties. Woody did all of the above, even getting arrested a few times for it.

During the Sixties, I’m sure they would have joined together at all the marches for racial equality, voter’s rights, Vietnam War protests, worker’s rights and things like that. But I think Woody might have actually left the scene, preferring to be out on the road alone, writing songs about what was going on in the towns and cities he landed in.

He finally came home two weeks later, without any cigarettes. So he went back out to get some cigarettes. 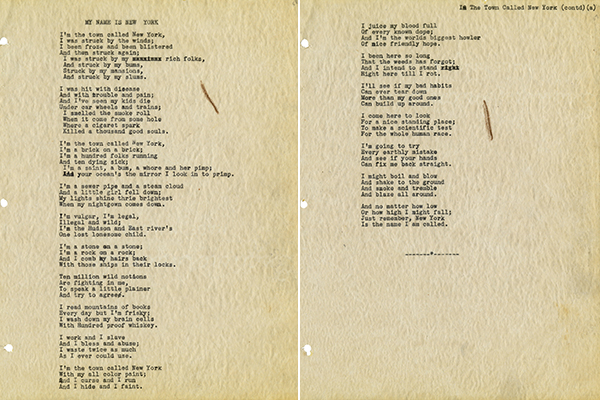