“A musical interaction or jam is a conversation, and the best conversations are the ones that flow freely,” Les Claypool told Rolling Stone via Skype recently, sitting next to current collaborator Sean Lennon. “When Sean and I started playing, there was a good volley of ideas.”

It’s not hard to see why the two artists hit it off. For more than three decades, Claypool has explored the outer reaches of alt-rock in Primus. Lennon, meanwhile, has been a mainstay of pop’s fringe, from his work with eccentric Japanese act Cibo Matto in the Nineties to the Ghost of a Saber Tooth Tiger, his long-running psychedelic project with girlfriend Charlotte Kemp Muhl. In 2015, GOASTT opened for Primus, leading to a backstage jam.

The pair kept in touch, and Lennon later decamped NYC to crash at Claypool’s guest house Sebastopol, California. In addition to his myriad musical side projects, Claypool is also a winemaker, and over copious amounts of vino and a fortuitous viewing of the Monkees’ big-screen freakout Head, a musical and personal bond was solidified, tellingly dubbed the Claypool Lennon Delirium.

RS reached Claypool and Lennon at an NYC studio as they prepped for the June 3rd release of their debut album, Monolith of Phobos – streaming in full below – and a lengthy summer tour that kicks off in Tampa, Florida, the following night. The conversation veered from surreal to unexpectedly heavy as the duo discussed tiny space moons, the OxyContin epidemic and other influences on the new LP.

When you two first started jamming, did the collaboration flow naturally, or was there a period of adjustment?
Lennon: It was comfortable but I was a little nervous, basically because I’m a nervous guy. Les was also someone that I’ve been a fan of since I was young. From my perspective, it was pretty natural. We have similar taste in notes. We tend to like the notes that other people hate. We also got along well. That’s the most important thing when you’re going to be on a tour bus with somebody. Les gets to work with a lot of great musicians, and he works with people that he likes.

Claypool: I use the metaphor that a musical interaction or jam is a conversation, and the best conversations are the ones that flow freely. It’s an exchange of ideas as opposed to dictation. When Sean and I started playing, there was a good volley of ideas and it was like an interesting conversation.

How did you approach the lyrics to Monolith of Phobos?
Lennon: Les is very good with lyrics and very steadfast about it. He’s always working. I was influenced positively by his work ethic. He would show up every morning with a full written song. I was like, “Damn, I gotta work harder at night.” He’s a real writer and has a real flow with words. When I work on my mine, I’ll spend months without penning the second verse.

Claypool: There’s times when I’m flowing and times when I’m ebbing. When I’m ebbing I go off and try and catch a fish or throw a ball through a hoop. When it’s flowing I try and get it down. My biggest writing inspirations are a cross between Bukowski and Dr. Seuss. I’m not that disciplined, though. I wish I could be like David Sedaris and carry a little notebook around while constantly writing down interesting things, because interesting things tend to happen quite a bit in the circle I run with.

Were there any particular records or films that inspired the album?
Lennon: Les got a telepathic communication from Buzz Aldrin.

Claypool: A big inspiration was us sitting down and watching the Monkees’ Head.

Lennon: Head is, like, my bible. Any project or important thought I’ve ever had was inspired by Head. We were talking about the amazing revelation that Buzz [Aldrin] revealed on C-SPAN. He said, “There’s a monolith on Phobos with a tiny, potato-shaped moon that’s revolving around Mars.” It’s the most mind-blowing thing I’ve ever seen on television. We were just hanging out watching that video, and Les came back the next day with a full song about it.

Claypool: Sean is like Encyclopedia Brown. He’s full of these little nuggets of weird information. He throws them at me and I’m dazzled. He started talking about the monolith on Phobos and showed me the Buzz Aldrin video. Because I’m not a science, techie guy, I was more inspired by the human element of an elderly astronaut and his perception of what’s going on in the universe.

When you’re writing about topics like that, do you ever stop and think, “This is pretty out there. …”?
Claypool: My daughter will tell you that I’m the square.

Lennon: I actually don’t enjoy people thinking that I’m a weirdo. I’ve felt awkward in certain situations but for the most part I don’t notice it. But I don’t really notice when I’m doing something that might be considered weird, unless I’m in very specific circumstances like the DMV.

Claypool: Am I happy that my career freaks out the people at the DMV? Yes. 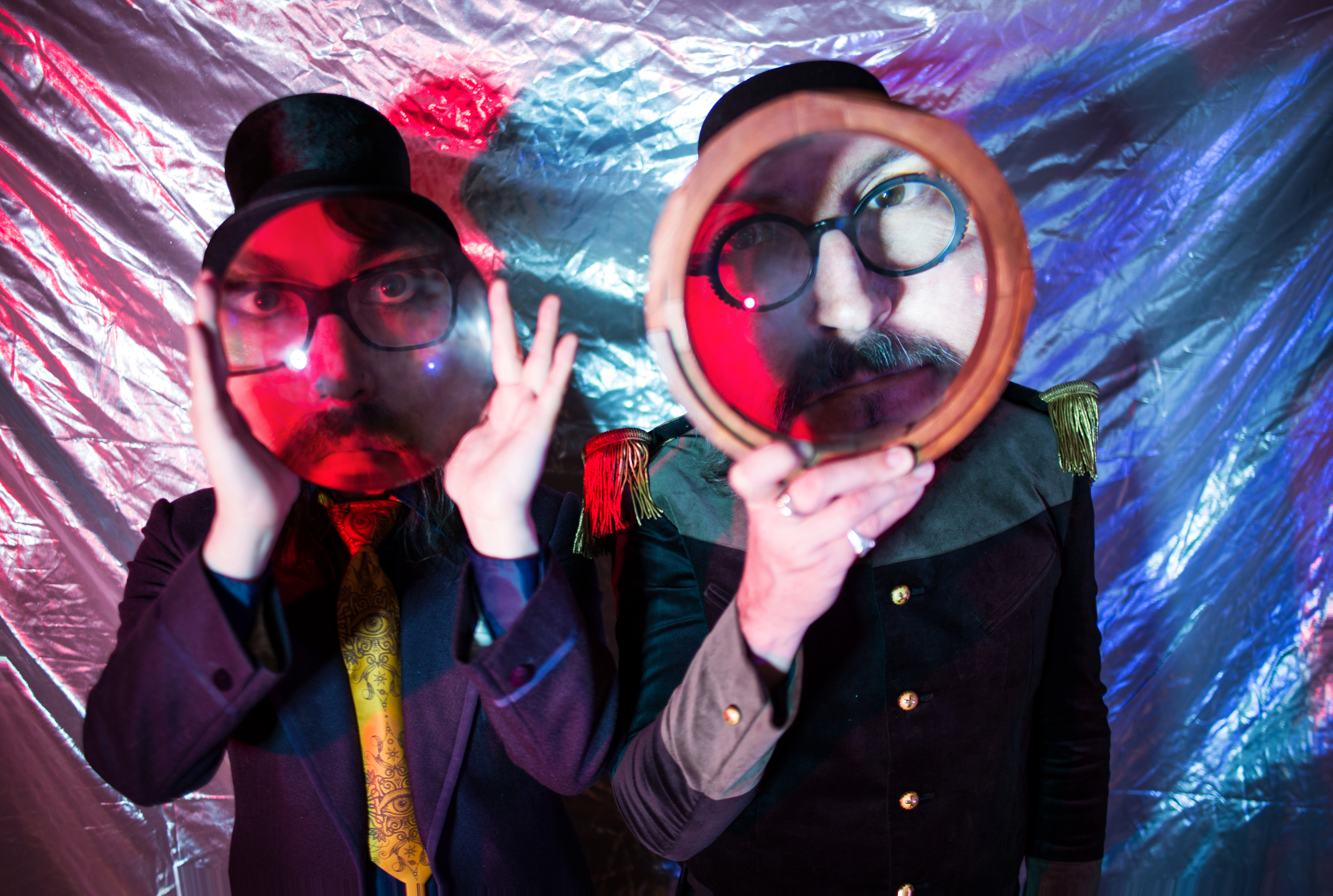 Do either of you get tired of being typecast as an oddball?
Lennon: With anyone who is generous enough to work with me, I always feel a little bit guilty because they have to endure a little bit of bullshit from my end that I inherited. I think we live in an age where we’re all more exposed to social media and the lowest common denominator of base, venal and vitriolic bullshit. We all have to deal with it more than ever, therefore we can’t take it too seriously. With having a social-media account and being a public figure, I have to assume that a certain amount of unwashed idiots are gonna try and attack and take me down. That’s the modern world, and I think because we’re so overexposed to that, we’re less sensitive to it.

While the album’s lyrics are surreal, is “Oxycontin Girl” a topical mediation on the opioid crisis?
Claypool: It definitely is. I have friends that were junkies, and I grew up around substance abuse and alcoholism. I have teenagers, and I am concerned about what’s going on with opiate abuse. My friend’s daughter is deep in heroin world because she started off on Oxys. Now, he doesn’t even know where she is. Lyrically, “Oxycontin Girl” is a dark tune, but it’s my way of voicing my concern and exorcising some of those demons through a character.

Lennon: There’s definitely an anti-Big Pharma theme on the record. There’s “Oxycontin Girl” but also “Cricket and the Genie,” which is about a kid that gets hooked on prescription drugs legally and it ruins his life. One of the biggest evils in America is the contradiction between Big Pharmacy pushing legal drug dealing on kids and adults while there’s a war on criminalized drugs that’s ruining a whole other subsection of society.

Have either of you had personal experience with addiction?
Lennon: I’m lucky that I don’t have an overtly addictive personality. I know a lot of people that just can’t be around certain substances. I’v never really had that severe a problem with anything. I definitely like to drink and have fun but it’s not really my issue.

Claypool: I was a pothead for many years.

Claypool: I grew up around addicts. My uncle was a tweaker for 30 years and died at 50. My grandparents were all alcoholics. Since I was a little kid, it was always reinforced in me by my parents that we had addiction issues in our family, and to be very careful. Because of that, I’ve always been a moderate guy. I’ve tiptoed around the volcano, but only tiptoed. I never jumped in. Ever since my kids were very young, I’ve told them stories of friends of mine that went too far. My buddy stole a nitrous tank from the dentist, filled up a garbage bag and ended up passing out inside. He suffocated. My kids know these stories.

Sean, what’s an extended stay at Les Claypool’s like?
Lennon: It’s really fun. I went out there with no expectations, thinking that we might just write some songs. Two weeks later we had a full record. It was an inspired time. I felt very comfortable there because I have a studio up in the country too. I prefer the country life and being out in the woods making music. Les and I went hunting for porcini mushrooms. I definitely prefer that to meeting people on Foursquare in Manhattan.

Claypool: It depends on where I’m at. If I’m feeling the flow, the studio is a wonderful place. When I’ve been home for a long time, I’m anxious to get on the road. More than anything, I find joy being with my family. It’s changed as I’ve moved through life. I was on the ocean for a week before coming out here, trying to catch a salmon. Referring back to the drug thing, why did my family members delve into drugs and alcohol? It was out of boredom. In my life and my kids’ life, I’ve always emphasized finding a focus. If you find things you enjoy doing, you’re less apt to sit there and hit an Oxy or the crack pipe. Being out on the ocean, tossing a ball or chasing my kids around have kept me rolling. These things stimulate my brain, rather than nullifying it with chemicals.