When John Lennon was working on his second solo album, he wrote “Imagine” at his white grand piano in his bedroom at his Tittenhurst Park estate, as his wife, Yoko Ono, looked on. When he cut it in the studio, it would also feature bass, drums and a string arrangement, co-produced with Phil Spector. A more spartan demo of the song featuring simply his voice and his 88 keys will make its debut on Imagine: the Ultimate Collection, an upcoming box-set anthology of the onetime Beatle’s celebrated Imagine album, due out October 5th.

An audio engineer found the “Imagine” demo by sheer luck in a box in the Lennon family archives in early 2016. “There’s a one-inch, eight-track [reel] that says nothing more on the Ascot Sound label than John Lennon, the date, and the engineer, Phil McDonald, with ‘demo’ on the spine,” engineer Rob Stevens said in a statement. “No indication of what material was on the tape. One delicate transfer to digital later, the ‘Imagine’ demo, subsequently enhanced superbly by Paul Hicks, appears within this comprehensive set. It was true serendipity.”

Imagine: The Ultimate Collection offers an in-depth look at the album with demos, outtakes, studio banter and “elemental” mixes that play up certain musical flourishes in the songs across four CDs and two Blu-rays. It includes “ultimate mixes,” raw studio mixes, songs in 5.1 surround sound and remastered quadraphonic mixes. It also includes “The Evolution Documentary,” which traces each song’s genesis from demo to a finished work with instructions, rehearsals, multitrack breakdowns and more. The new mixes and masters will also be available as a two-disc deluxe edition, single-disc remaster, double-LP vinyl edition (both on black and clear vinyl) and digitally.

“Imagine was created with immense love and concern for the children of the world,” Ono wrote in the collection’s liner notes. 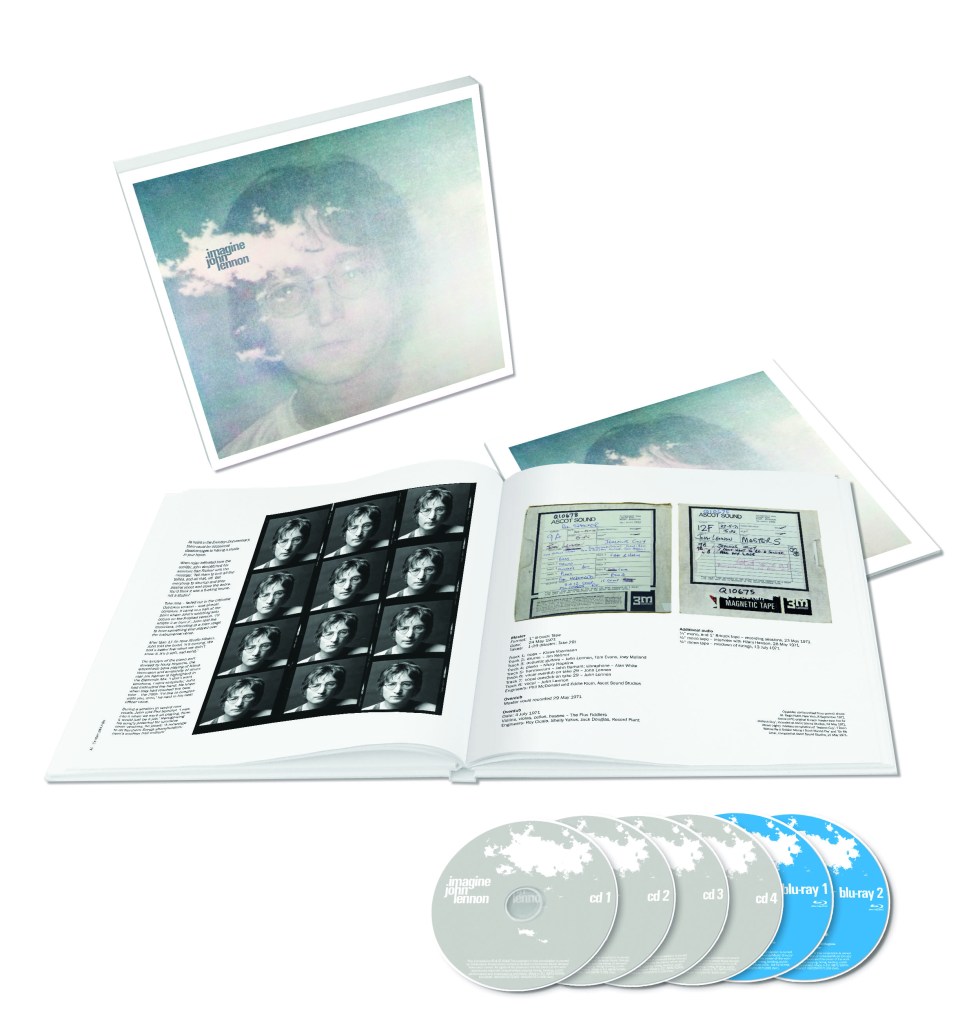 The new mixes were made by Hicks, who transferred the tapes to high-resolution, 24-bit, 96 kHz transfers and focused on making the music clearer sonically with more of an emphasis on Lennon’s voice for the “ultimate mix”; the quad version is the one that Spector, Lennon and Ono made in the Seventies. The second disc contains outtakes and “elements mixes,” where Hicks mixed the songs to play up certain instruments such as a strings-only “Imagine” and vocals-only “Oh My Love.” The third disc presents the songs as they were played on the soundstage in Lennon’s Tittenhurst home and don’t feature any production flourishes; these are also mixed into 5.1 sound on the second Blu-ray in a way that’s meant to feel like the listener is sitting in the middle of the session. The fourth disc contains the Evolution Documentary, which tells the story of each song’s construction.

The first Blu-ray contains the album in surround sound, stereo and “Quadrasonic.” The second features much of the music on the CDs in higher resolution and surround as well as interviews with Lennon and Ono.

In addition to the box set, October 5th will see the release of two films Lennon and Ono made together: Imagine and Gimme Some Truth on Blu-ray and DVD, as well as digitally. They will feature both remastered audio and video and include previously unreleased “raw” studio mixes and footage of a photo shoot. The film, Imagine, is also getting a theatrical release with a soundtrack mixed in Dolby Atmos.

On October 9th (what would have been Lennon’s 78th birthday), Ono will release the book Imagine John Yoko, co-authored by herself and Lennon. She compiled and curated the book herself with previously unpublished material; it will tell the story of the making of the Imagine album.

The box set is available for preorder.

Disc One: Imagine: The Ultimate Mixes

Same track list as Disc One and Disc Two, tracks 5 to 20, remixed in 5.1 surround and high-resolution stereo. This disc also includes the original album in quadsonic mixes.

Blu-ray Disc Two: In the Studio and Deeper Listening

This disc contains the extended album versions from Disc Three in 5.1 surround sound and high-res stereo in addition to the below.