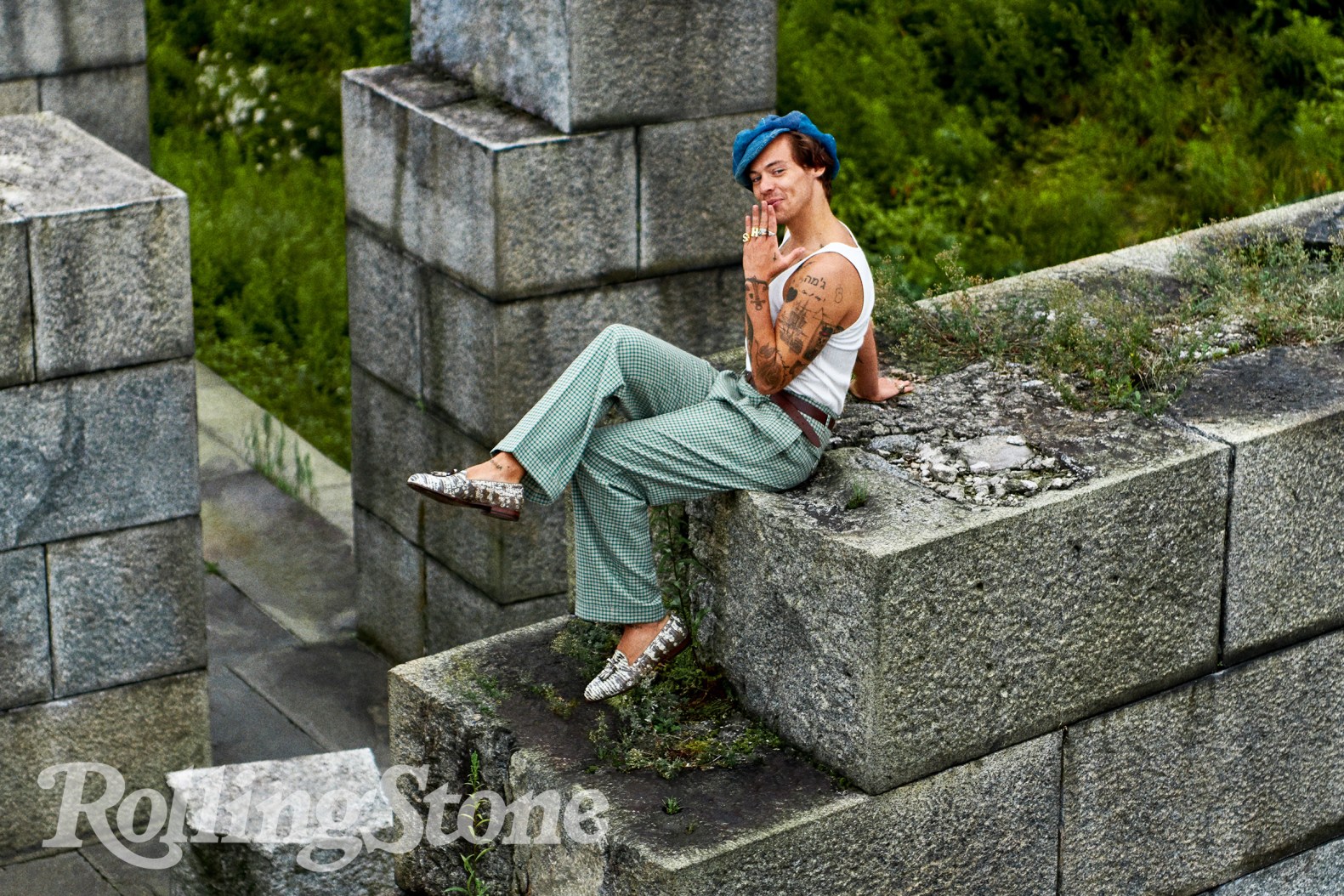 Harry Styles appears on Rolling Stone‘s September cover. Writer Rob Sheffield traversed Los Angeles and London with the former One Direction member for an in-depth interview about sex, drugs and rock & roll. Here’s a few highlights from the story that shouldn’t be missed.

He’s putting the finishing touches on his second solo album.

Styles made his mark as a solo artist over two years ago with his rootsy, rock-leaning self-titled debut album. After nearly a year of touring theaters, then arenas, and a few deserved months off, he holed up in Malibu for six weeks to record his sophomore LP at Rick Rubin’s Shangri-La studios with producers Jeff Bhasker and Tyler Johnson as well as friends and collaborators like guitarist Mitch Rowland, drummer Sarah Jones and Kid Harpoon (a.k.a. Tom Hull). In Styles’ own words, his new album is “all about having sex and feeling sad.”

While recording, it seems like he has unleashed his inner rock geek. In the studio, he gleans inspiration from T. Rex’s “Cosmic Dancer” for the string section on an unnamed song. He has also become obsessed with Paul McCartney’s work as a solo artist and member of Wings. Styles also cites a rare David Bowie interview from the Nineties as his biggest emotional motivator for the type of work he’s doing.

“If you feel safe in the area that you’re working in, you’re not working in the right area,” Bowie says in the clip Styles played for Sheffield. “Always go a little further into the water than you feel you are capable of being in. Go a little bit out of your depth. And when you don’t feel that your feet are quite touching the bottom, you’re just about in the right place to do something exciting.”

Psychedelics were a huge part of his writing and recording process.

Like many of the artists who inspired Styles, the singer-songwriter found himself getting really into psychedelics. “We’d do mushrooms, lie down on the grass, and listen to Paul McCartney’s Ram in the sunshine,” he said. “We’d just turn the speakers into the yard.” At one point, while recording, Styles bit off the tip off his tongue while on ‘shrooms and sang while blood gushed out of his mouth. He even jokes about naming the album Mushrooms & Blood.

Styles and Kid Harpoon tracked down the woman who made Joni Mitchell’s dulcimers in the Sixties.

Crank Up the Propane: ‘King of the Hill’ Is Back

Styles cites Joni Mitchell’s Blue and Van Morrison’s Astral Weeks as lyrical inspirations. He became so infatuated with Blue in particular that he tracked down the woman who built Mitchell’s dulcimers in the Sixties. “She said, ‘Come and see me,’” collaborator Kid Harpoon recalled. The had located her in Culver City. “We turn up at her house and he said, ‘How do you even play a dulcimer?’ She gave us a lesson. Then she got a bongo and we were all jamming with these big Cheshire Cat grins.”

Styles had the chance to meet Van Morrison in February. Their backstage hang was documented with a photo that proves that few people are immune from the Styles Charm: He elicits a rare smile from the often somber Irish singer-songwriter. “I was tickling him behind his back,” Harry revealed. “Somebody sent me that photo — I think his tour manager took it. When I saw it, I felt like John Travolta in Pulp Fiction opening the case with the gold light shining. I was like, ‘Fuck, maybe I shouldn’t show this to anyone.’”

Styles is engaging critically with his own masculinity and vulnerability through his music and his friendships.

Currently, the 25-year-old feels “looser” and is learning how to be vulnerable with his friends and family. “I feel pretty lucky to have a group of friends who are guys who would talk about their emotions and be really open,” he said of how him and his peers are engaging with their own masculinities, sexualities and identities. “My friend’s dad said to me, ‘You guys are so much better at it than we are. I never had friends I could really talk to. It’s good that you guys have each other because you talk about real shit. We just didn’t.’”

Those conversations in his life are helping his songwriting. “For me, it doesn’t mean I’ll sit down and be like, ‘This is what I have for dinner, and this is where I eat every day, and this is what I do before I go to bed.’ But I will tell you that I can be really pathetic when I’m jealous. Feeling happier than I’ve ever been, sadder than I’ve ever been, feeling sorry for myself, being mad at myself, being petty and pitiful — it feels really different to share that.”

During his tour, Styles would often bring LGBTQ pride flags on stage, while his guitar bore stickers in support of Black Lives Matter and ending gun violence. He is aware that as a cis white male, life is easier for him than it is for his friends and his fans. “It’s not about me trying to champion the cause, because I’m not the person to do that,” he said. “It’s just about not ignoring it, I guess. I was a little nervous to do that because the last thing I wanted was for it to feel like I was saying, ‘Look at me! I’m the good guy!’ I didn’t want anyone who was really involved in the movement to think, ‘What the fuck do you know?’ But then when I did it, I realized people got it. Everyone in that room is on the same page and everyone knows what I stand for. I’m not saying I understand how it feels. I’m just trying to say, ‘I see you.’”

If you recommend a book to Harry Styles, he will definitely read it.

Styles admitted that reading wasn’t really his “thing” until an ex-girlfriend gave him some books. “I felt like I had to read them because she’d think I was a dummy if I didn’t read them.”

He now devours any recommended novels thrown at him, including Haruki Murakami’s Norwegian Wood. “Harry’s the only man I’ve given it to who actually read it,” his creative director Molly Hawkins said. Styles sang Murakami’s praises throughout the interview.

He spent his 25th birthday in Japan.

Styles spent several months unwinding and living anonymously in Japan. During that time he started listening to more jazz and reveled in his solitude. For his 25th birthday, he spent five hours drinking tea and reading Murakami’s The Wind-Up Bird Chronicle in a cafe in Tokyo. He also shared music recommendations with the bartender at a vinyl bar he became a regular at. “In Tokyo I used to go to a vinyl bar, but the bartender didn’t have Wings records,” he recalled. “So I brought him Back to the Egg. ‘Arrow Through Me,’ that was the song I had to hear every day when I was in Japan.”

His break-up with French model Camille Rowe had a huge effect on his new album.

Styles dated Rowe for a year, and they broke up last summer. He never referred to her by name, but admitted to being fairly broken up over the end of their relationship. Kid Harpoon noted how much of an impact the relationship had on him, with Styles even getting upset when he saw his friend wearing slippers Rowe had given him for Christmas the previous year.

Styles has chosen discretion when it comes to speaking about his romantic relationships, but he sees his music as fair game. “It’s not like I’ve ever sat and done an interview and said, ‘So I was in a relationship, and this is what happened,’” he said. “Because, for me, music is where I let that cross over. It’s the only place, strangely, where it feels right to let that cross over.”

He would reunite with One Direction “for the right reasons.”

Harry Styles loved being in One Direction. He also doesn’t understand artists who used to be in boy bands who hate their former groups. “If I didn’t enjoy it, I wouldn’t have done it,” he admitted. On tour, Styles even covered several One Direction songs. “It’s not like I was tied to a radiator.”

The boy band went on “hiatus” in 2015, but don’t count them out just yet. He wouldn’t say “never” to a reunion, but he’s aware that every member is doing something unique musically. If a reunion happened, it would have to be “for the right reasons,” noting that if they found themselves together again “it wouldn’t be the same.”