On the weekend of Saturday, August 3rd to Sunday, August 5th, a vibrant crowd of SoCal electronic dance music lovers flocked to the downtown grounds of this year’s HARD Summer music festival. Headliners including Knife Party, Empire of the Sun, Justice, Duck Sauce and Dog Blood moved the energetic masses across the venue that wowed with a personality all its own. The Los Angeles State Historic Park, located smack dab in the center of the city’s quirky Chinatown district, served once again as the perfect backdrop for one of L.A.’s last remaining dance music spectacles.

The action began at 12:30pm on Saturday afternoon with a wide spectrum of talent divvied up across four different stages – HARD Stage, HARDer Stage, Summer Stage, and the event’s only tented destination, the Underground Stage. Fans with a hankering for headlining acts visited the HARD Stage, also known as the festival’s resident main stage. The HARDer Stage attracted bass-cravers and headbangers in attendance, featuring all-star acts including Baauer, Dillon Francis, and Flosstradamus.

Rapper Azealia Banks was a no-show at HARD Summer on Sunday, due to a reported throat infection. Fans expecting to hear the hip-hop diva on Day 2 were disappointed when DJ Clockwork’s set ran long and straight into Flosstradamus’s set, with nary an announcement online or on site. Banks also cancelled scheduled appearances over the weekend at Lollapolooza in Chicago and Osheaga Festival in Montreal, Quebec, both of which featured her Twitter nemesis Angel Haze in their line-ups.

UPDATE: Due to a throat infection, @AZEALIABANKS has been advised to cancel her #lolla show. New Saturday Schedule: http://t.co/W2O2dcrcY3

In fact, this tweet from Lollapalooza was the only indication that Banks was having problems. The diva cancelled several festival dates last summer as well. Her debut album has yet to drop, more than a year from the date when it was first expected.

Below, we’ve listed six standout acts of the 12-hour electric spectacular that’ll keep us looking back for years to come. 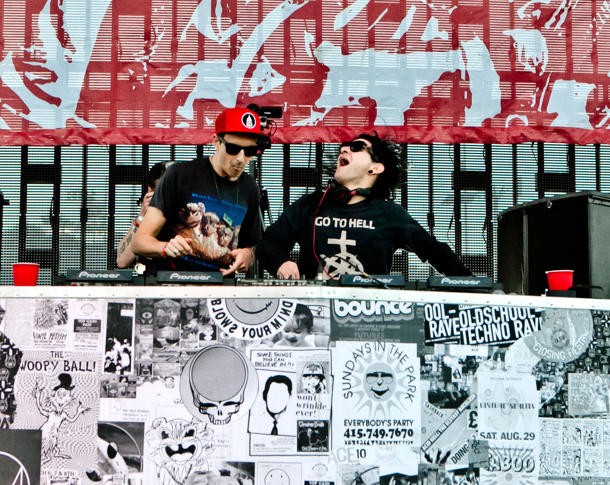 Dog Blood: Their moniker may be new to festival rosters, but hordes of HARD Summer partiers made it a priority to catch all that Dog Blood had to offer on Saturday evening. The DJ/production duo resulted from a prestigious musical alliance between EDM A-listers Skrillex and Boys Noize. Their set fell at dusk, with the transition into nightfall acting as the perfect context for the dark, sharp-edged sound they had to deliver. For one hour and 15 minutes, they charged on with an eclectic smattering of expertly paced and curated techno, trap and hard house tracks.

TNGHT: On Saturday, revered hip-hop/electronica duo TNGHT also caused a scene to remember at the HARDer stage. Their set was a gorgeous assemblage of stripped-down percussive elements paired with glitchy hip-hop beats. Dark, minimal visuals and rough, resonating bass booms and snares made for the perfect set to experience by moonlight. 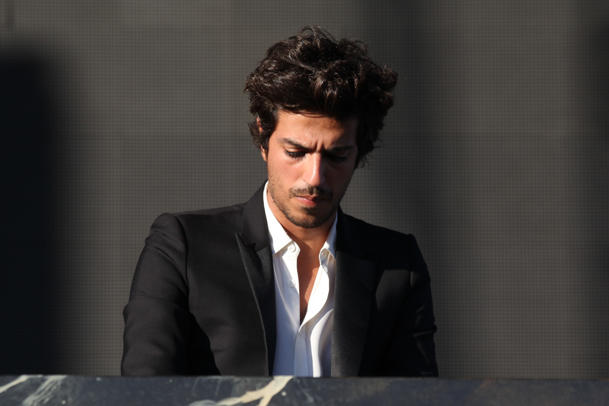 Gesaffelstein: He’s the French mastermind behind punchy techno tracks that put a kick in your step with each sharp beat. His set embodied all the slick production stylings he’s known for. The set fell early Sunday evening at the main stage, leaving plenty of room on the dance floor for fans to flail wildly to what the “Control Mouvement” producer had to offer. His track selections built a dark atmosphere that was equal parts eerie and easily grooved to.

Dillon Francis: EDM’s resident class clown kicked off his set at the HARDer Stage with a hilarious introduction from his famed Instagram-born alter-ego DJ Hanzel. Wacky emoji-inspired visuals as well as an impromptu break into the “Happy Birthday” song in honor of Flosstradamus’s Curt Cameruci were humorous highlights of the headliner’s performance. Francis kept the mood light and goofy at various points throughout his set as per usual, while staying on point with the masterful mixing chops he’s known for. He raised hype levels sky-high with an array of bass-heavy moombahton, trap and house selections in addition to a number of tracks from his upcoming full-length debut that garnered positive response from the crowd. Francis also created some peak moments of emotion by including old-school classics like the Notorious B.I.G.’s “Juicy” and Alphaville’s “Forever Young.”

Claude von Stroke: The fest’s Underground Stage was the tented home to a number of slick dance acts meant for grooving including Duke Dumont, Disclosure and Oliver. Dirtybird Records head honcho Claude von Stroke closed the fest on Day 2 with a massive techno/hard house set that kept the tent’s relatively minimal crowd moving without a care.

Mr. Oizo: Mr. Oizo made a name for himself in dance music’s earlier days for his trailblazing French house recordings. The yellow sock puppet that appeared in the video for his 1999 classic “Flat Beat” was given new life in the adorable official trailer for HARD Summer 2013. Although he appeared at the Summer Stage, the smallest of the fest’s four stages, it was an amazing treat to experience so many unfamiliar hard house, electro and techno tracks in a setting so intimate. Oizo’s set pounded with unrelenting force throughout. An especially memorable high point was his out-of-the-blue drop of popular Sidney Samson banger “Riverside.”