“How many vintage Green Day fans are out there tonight?” asked singer-guitarist Billie Joe Armstrong last night at the Fox Theater in Pomona, California, midway through the opening show of the band’s U.S tour – the band’s return from Armstrong’s recent rehab. As if to get a closer look, he asked, “Who wants to join us onstage? Come on, let’s go!”

The two-hour concert in the 2,000-capacity theater just outside Los Angeles was the first of four intimate warm-up shows (including a stop at SXSW) before heading out to arenas later this month. Just before their entrance, the Fox PA blasted both Queen‘s “Bohemian Rhapsody” and the Ramones’ “Blitzkrieg Bop,” indicating the band’s twin aspirations: classic rock scope with a DIY mentality.

Many fans were certainly old enough to remember the band’s sudden rise from oblivion with 1994’s multi-platinum Dookie, but most of the 16 excited audience members who made it up to the stage were far younger, though one guy was big enough to carry Armstrong on his shoulders as the bandleader slashed at his guitar. 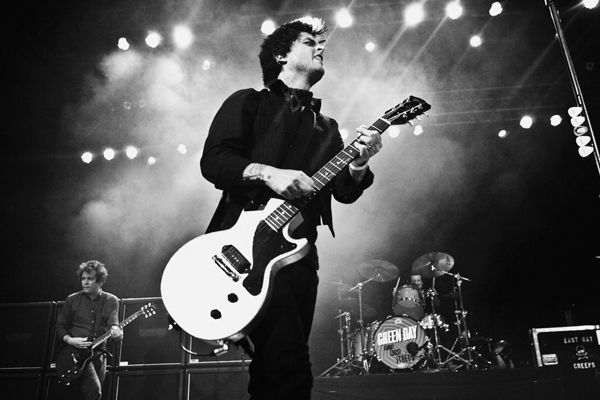 Drummer Tré Cool was the first to bound onto the stage, slamming a hard beat to begin the forceful pop of “99 Revolutions,” the first song in an opening half-hour heavy with material from the band’s trio of 2012 albums: ¡Uno!, ¡Dos! and ¡Tre!  Armstrong repeatedly shouted, “Let’s go fucking crazy!”

There was a thunderous “Stop When the Red Lights Flash” (from ¡Dos!) and a tough, forlorn “Oh Love,” set off with dueling guitar solos. Green Day also ripped through “Stay the Night” (from ¡Uno!), though the band stopped long enough to leave Armstrong one of the night’s many moments of a cappella. They paused again for “Let Yourself Go,” as the crowd bounced and sang the chorus without him: “Shut your mouth ’cause you’re talking too much/ And I don’t give a fuck anyway.”

From 2009’s 21st Century Breakdown was “Know Your Enemy, during which Armstrong pulled a young boy up from the front rows to sing a couple of lines from the song before being sent (maybe for the first time) airborne into the crowd. The breakdown between artist and fan is something Green Day has perfected over the years; on past tours, Green Day has even pulled young musicians up to riff along with the band. 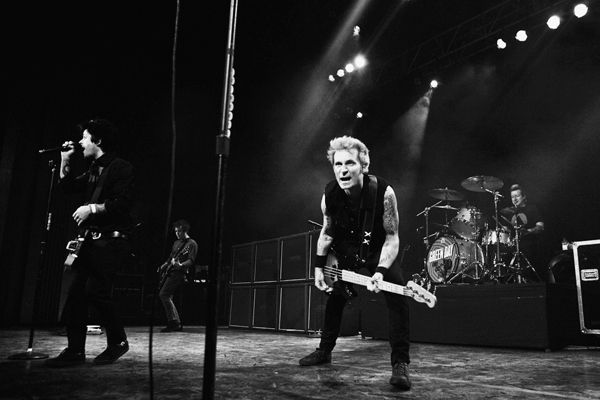 At the Fox, there were no special effects and big production values, just a punk band with a mountain of amps and a pocketful of pop hooks. As in the past, Green Day’s core trio were joined by three more players on guitar, keyboards and vocals. The 2005 hit “Holiday” rode a liquid bassline from Mike Dirnt, and the lights went down as Armstrong scanned the crowd with a searchlight. He grabbed the mike again, shouting, ‘The representative from California has the floor!'”

Later, the band roared through a large chunk of AC/DC‘s “Highway to Hell” (not for the first time), and fans shouted along like it was just another Green Day hit. Armstrong teased them that more metal was coming and began plucking a sloppy “Stairway to Heaven,” but quickly shifted into his own “Brain Stew.” That tune was stretched out long enough to allow the singer to bring out an arsenal of toys: a big water gun, a toilet paper gun and another that fired T-shirts deep into the crowd.

Near the end came an R&B medley, including the Isley Brothers’ “Shout” and Green Day’s own “King for a Day,” with Armstrong on his knees drifting into a vocal of Ben E. King’s standard “Stand By Me.” It returned to a final blast of “Shout” and an accelerating beat with bleats of saxophone. The night was nearly done, but the band sounded charged up for the year of touring still ahead of them.

“99 Revolutions”
“Know Your Enemy”
“Stay the Night”
“Stop When the Red Lights Flash”
“Let Yourself Go”
“Oh Love”
“Holiday”
“Letter Bomb”
“Boulevard of Broken Dreams”
“Hitchin’ a Ride”
“Brain Stew” (with parts of “Highway to Hell,” “Stairway to Heaven”)
“St. Jimmy”
“2000 Light Years Away”
“Paper Lanterns”
“When I Come Around”
“Basketcase”
“F.O.D.”
“She”
“King for a Day” (medley with parts of “Shout” and “Stand By Me”)
“Wake Me Up When September Ends”
“Minority”
“American Idiot”
“Jesus of Suburbia”