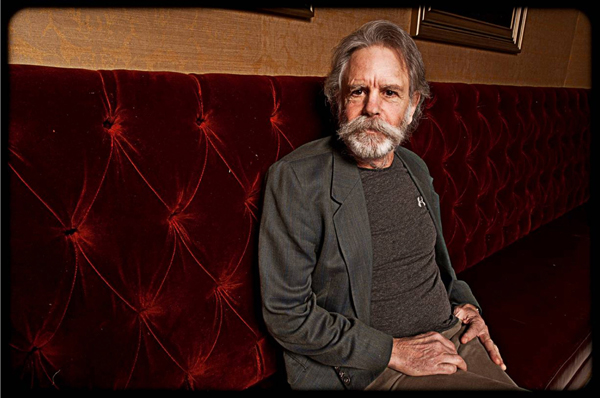 Grateful Dead bassist Phil Lesh recently announced plans to open a new mixed-use performance space called Terrapin Crossroads in San Rafael, Calif. Not to be outdone by his bandmate, guitarist Bob Weir has now revealed his involvement in a similar venture just down the road from Lesh’s spot. The two musicians still perform together in the group Furthur.

Before shuttering in 2007, the Sweetwater Music Hall was a musicians’ gathering spot in the artistic Bay Area community of Mill Valley. This week, Weir and his partners reopened the landmark venue in new digs a couple blocks away from its original location.

“Marin County used to be a real hub for music,” Weir tells Rolling Stone. “It was a hotbed for music. And I miss that. And Phil misses that. And we’re trying to bring that kind of consciousness back to Marin County. The music kind of disappeared from Marin about 20 years ago when people stopped going to clubs and stuff because everybody got married and had kids. Well, now those kids are growing up and they’re going to be playing in the clubs, so I think it’s going to happen again.”

Sweetwater’s new location in the Masonic Hall allowed for the complete renovation of a space that has hosted live music and events for more than a century. The remodeled interior is modern sleek, boasting state-of-the-art sound and streaming video technology, with clean sight lines and cozy hangout spots. It also features a gourmet cafe offering locally-sourced, organic fare.

In addition to a full performance schedule from both local and national bands, the reopened venue will revive its open mic night. In the past, the event has attracted national musicians like the late Clarence Clemons. The Talking Heads’ Jerry Harrison used to frequent the club and was seen there earlier this week at a private pre-opening function. So was Grateful Dead lyricist John Perry Barlow.

Weir expects that he will find plenty of opportunities to play in his hometown’s new hangout when he’s not touring. He’s set to perform a private show there with his band Ratdog this week, and he also says he plans to sit-in with guitar virtuoso Steve Kimock on Sunday.

“I’ll do whatever is appropriate in there,” he says. “A lot of the bands I play with might bring trouble to the area if we tried to play there, so maybe I’ll do solo concerts or little projects; I can think of a number of things.”

Sweetwater will also host master classes, workshops, a Sunday music brunch and a Wednesday night jam session led, initially, by Ratdog’s Mark Karan. The full schedule launches this Friday with a sold-out show by the Outlaws.

“For years, the Sweetwater was the place many of us local and visiting musicians headed to when we were looking to play for fun,” said Weir. “Well, our clubhouse is back – and it belongs to all of us. Woo-hoo!”