Gotye Rises up From Down Under - Rolling Stone
×
× 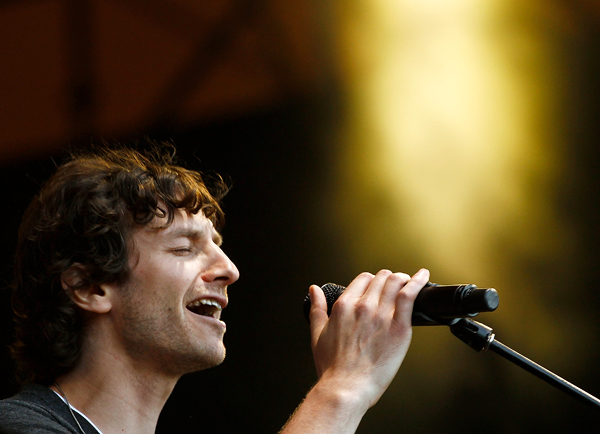 In late 2008, on a windy night in Winton, a speck of-a-town in the Australian outback whose population was last estimated as less than 1000, Wally De Backer, better known by his stage name Gotye (pronounced GO-TEA-YAY), went for a late-night stroll. Earlier that day, a local had filled him in on one of the city’s remote gems – out by a truck stop, on a flat plateau of land, stood the famed Winton Musical Fence. The fence consists of nothing more than five large strings attached to its metal posts. But when played, the odd instrument generates an unusually beatific, twangy thwack.

De Backer, whose most intriguing songs sample natural field recordings and other aural oddities, didn’t waste the opportunity: He found the fence, played it and sampled his makeshift performance. That sound is now the reverb-drenched bassline on “Eyes Wide Open,” one of the most chillingly beautiful cuts off his recently released album Making Mirrors.

This DIY process of piecemealing unexpected sounds to create something bold and new is at the core of the multi-instrumentalist’s approach to songwriting, and figures largely on Mirrors. “I was after discovering [sounds] that have a story to me personally,” De Backer says of the approach he took on his third album. He is already an award-winning artist in Australia but is largely considered a new discovery in the States. “There’s something I like about that,” he says.

For Mirrors, De Backer, 31, spent nearly two-and-a half years writing, recording and excavating various sounds. Now thanks to a YouTube video for its lead single “Somebody I Used To Know”– which sees both De Backer and female New Zealander singer Kimbra warping into geometric shapes via body paint – having racked up over 60 million views, the album is attracting mainstream attention stateside. De Backer however, is accustomed to critical praise: he’s a bonafide star in Australia. Nonetheless, he relishes his newbie status in U.S. “It keeps it fresh,” he says.

The shaggy-haired musician is now playing to sold-out crowds across the country. But by contrast, he recorded his album in virtual isolation. In early 2010, De Backer retreated from his home in Melbourne and set up shop in a barn on his parent’s nearly 13-acre farm on Victoria’s remote Mornington Peninsula. De Backer says he finds the mechanized routine of studio recording a “waste of money.” As such, the uninhibited style of recording in the barn jived with his manic creation method. “I can spend whatever time I want, record whatever time of day I want, whenever an idea strikes,” he says. “It feeds well into the way I write and produce.”

And the way De Backer writes and produces is equal parts old-fashioned and new-age. He’s quick to describe how he scours local antique and record stores for vintage instruments and obscure records for sampling purposes. But he also simultaneously creates what he calls “virtual versions” of acoustic instruments by multisampling recordings of unconventional instruments such as a chromaharp and mbira. “It’s kind of a forward- and backward-looking thing at the same time,” De Backer says, explaining this process as a means by which he can give new life to these largely-forgotten instruments and little-known records. “There’s an aspect of looking backwards – trying to bring them into the present,” he says. “Whether that’s a break from an old record or an [old instrument] juxtaposed with something else in a more contemporary context.”

For De Backer, a drummer by trade, the act of sampling became such a large part of his musicmaking process that he admittedly lost sight of the necessity for live instrumentation. On “Eyes Wide Open” however, he played live drums for the first time while recording. “When I started making music, I was so excited and satisfied with combining samples on the computer and programming and just got quite into being a programmer,” he says. “I should try to get outside that [programming] mindset going forward,” he says.

Translating these songs to the live setting has also made for a new challenge. De Backer is currently fielding a five-piece band on his U.S. tour (they recently performed on Jimmy Kimmel Live) and feels as if he is assuming “a bit of a musical director role.”  He says it comes down to finding the proper channel by which he can relate to his bandmates so they can create something truly special. “It’s all about communicating and developing things and working slowly on how you hear stuff,” he says of the inherent challenges of recreating such intricate and personal songs with other musicians. “Everybody hears things slightly differently or brings a different approach.”