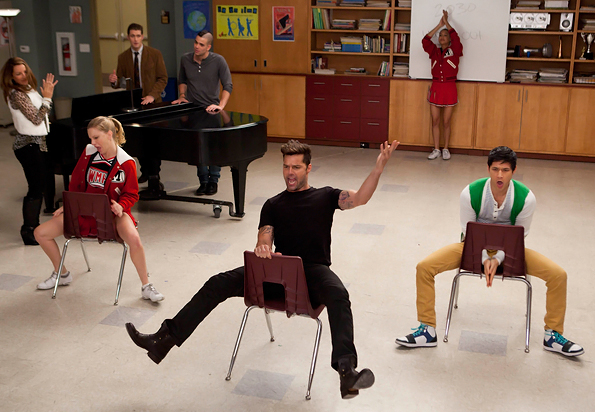 We were promised a chance to live “la Gleeda loca,” and that is indeed what last night’s episode was. Was “The Spanish Teacher” good? Asi, asi. For those non-Spanish speakers (which, according to Glee, by the year 2030 will be very few of us, as Spanish will be the most spoken language on the planet), that’s “so-so.” Ricky Martin carried on the Gwyneth Paltrow tradition of pretty great guest teacher cameos, but the rest of the episode found us back in scatterbrained plot territory:

“I’m Sexy and I Know It”:
Schue once again proves his status as worst teacher of the year when he embarks on a quest to secure his tenure. His stereotype-laden annual rendition of “La Cucaracha” falls flat and Figgins gives him some valuable advice: “You’re a spanish teacher. Maybe you should try learning spanish.” Schue enrolls in night school to learn from former tooth model and impossibly charming native Spanish speaker David Martinez (Martin), who passes on some advice of his own (also previously passed on by Paltrow’s Holly Holliday): teach the kids through song.

Mr. Martinez pops in to help Schue explain this week’s assignment: sing songs written or performed by a) someone Latin, b) of Latin descent or c) English songs performed bilingually. But most importantly, sing with duende – that hard-to-describe quality of a performance that generates tears and happiness and passion. At Santana‘s request, Mr. Martinez illustrates example C with some bilingual LMFAO that’s basically the male version of “Do You Want to Touch Me (Oh Yeah)” (as sung last season by Holly Holiday): a rousing number that toes the line of being too risque for a high school classroom, while at the same time being infectious enough to get the entire glee club on its feet. Martinez sounded just fine on the vocal, though singing LMFAO isn’t exactly a vocal challenge. Regardless, we definitely would agree with Martinez when he declares, “I’m Sexy and I Know It.”

“Don’t Wanna Lose You”:
Mercedes and Sam ask Miss Pillsbury and her pamphlets for some guidance in resolving their post-kiss scenario without getting anyone hurt. But “You’re a Two-Timing Ho” and “So You’re Dating a Two-Timing Ho” don’t quite do the trick, so Pillsbury mandates a vow of silence between the two for the next week with hopes that with silence comes clarity. After trying to find inspiration while watching a Twilight DVD, Mercedes opts for a better emotional aid: song. If this were American Idol, we’d hand it to Mercedes for taking Latin week and successfully finding a song that suits her voice and style. She brings a richness and power and commendable Spanish pronunciation to Gloria Estefan’s song, bringing total Estefan references to two (Santana previously welcomed the arrival of “the Lima Sound Machine”). It’s hard to mistake the meaning of the song, and Sam finds it hard to look away – but he does, and the vow of silence is upheld.

“Bamboleo/Hero”:
For his assignment and response to Mercedes, Sam enlists the boys to help him sing a Gypsy Kings/Enrique Iglesias mash-up. Unfortunately the performance lacks the fire and sex appeal of the originals – though, weirdly, if you closed your eyes you might have a hard time realizing that it wasn’t Iglesias singing. When the week is up, it looks like Latin week proved a recipe for romance for a reunited Sam and Mercedes – until her boyfriend shows up before either of them could get a word out, and Mercedes picks Shane over Sam.

“La Isla Bonita”:
We are impressed that no Evita songs made it into the episode’s soundtrack given that Ricky Martin is starring as Che on a Broadway revival of the show in less than a month. But we get a Madonna tune, so it’s close enough. That’s right, on the heels of her Super Bowl halftime performance and announcing her world tour, Madonna also got another tribute from Glee. And it’s the best number of the night. Santana recruits her crush, Mr. Martinez, for a bilingual take on Madonna’s already Spanish-friendly tune that mixes slick dance moves and spot-on singing with perhaps a touch too much sexual tension for a student/teacher pairing.

“A Little Less Conversation”
In another secondhand embarrassment-inducing attempt to uphold his authority as a Spanish teacher, Schue dons “authentic Spanish matador” garb for a bilingual Elvis performance. Things reach a new low when he brings out Mike and Brittany as his bulls, and the only good thing about the number is that it prompts Santana to finally challenge his qualifications. “Why don’t you dress up as the Taco Bell chihuahua and bark the theme song to Dora the Explorer? You don’t even know enough to be embarrassed about these stereotypes that you’re perpetuating,” she says, and gets Schue to admit the only reason he’s a Spanish teacher is because it was the sole opening when he started. In the moral-of-the-story moment, Santana shares that an “amazing” teacher once taught her, “without passion, you can’t succeed.” Who was that teacher? Schue, while teaching glee club. As a result, he resigns from the Spanish department, considers an opening in the History department and gets Figgins to approve offering Mr. Martinez the Spanish teacher vacancy. This is obviously how all of that would happen in a normal school environment.

Why Didn’t Anybody Sing About This? In mostly irrelevant Sue Sylvester plot lines, our fearless coach has decided to have a baby. She tries to recruit the New Directions boys and Schue as sperm donors, before finally settling on a mystery man to fill her needs. At the same time, seven teachers are up for one tenure slot, so the backstabbing begins. Santana submits a complaint about Schue for reasons that were actually answered through music, but nobody sung about why Becky complained about Sue (we find out it’s because she thinks Sue is no longer focused on the Cheerios, which Sue admits was true but will no longer be true, as her forthcoming motherhood has given her a renewed perspective on life). Who gets tenure? Miss Pillsbury, of course.

We also saw the return of Nene Leakes’ swim coach, Roz Washington, who reminds us of what an entertaining spitfire Sue was during season one. After finding out about Sue’s pregnancy plans, she had this to say: “You can’t have a baby. You as old as a hill. You’re not going to give birth to a child; you’re going to give birth to a grandchild.” So, when is Sue going to exert her evil planning on Roz? And why hasn’t this happened already? Sue, you are a shadow of your former self.

Finally, after being so relevant it deserved a cliffhanger, Rachel and Finn‘s romance was pushed back to a third-level story line. We don’t find out if Rachel actually told Finn about her NYADA finalist status, but she does spill the beans about her engagement to Mercedes and Kurt at the Twilight sleep-over. They both try and talk some sense into her, but she defends her decision: “I know i’ve chosen the right person. The scary part was choosing to know it.” In turn, Kurt tries to talk some sense into Finn and persuade his brother-by-marriage not to use the engagement as a way of giving up on himself despite his rough year. “I think you’d be lucky to marry [Rachel] one day. But I just don’t want to you to turn into nothing but the guy who holds her purse on the red carpet… Your time isn’t up Finn; it’s just beginning.” Kurt proves Burt‘s excellent pep talks are a genetic thing, and Finn seems to finally stop and think about his decision.

Bottom Line: The episode set its scope too wide, trying to tackle a handful of new and old issues in one theme week. Instead of doing each one of them justice, we got a sampler platter of mostly half-developed story lines – Mercedes and Sam’s will-they-or-won’t-they being the only one played out strongly enough through dialogue and song. Next week we’ll finally get the debut of Glee Project winner Samuel, the highly anticipated reveal of Rachel’s dads (Jeff Goldblum and Brian Stokes Mitchell) and some B-52’s via “Love Shack.”

Last Episode: A Tribute Worthy of a King