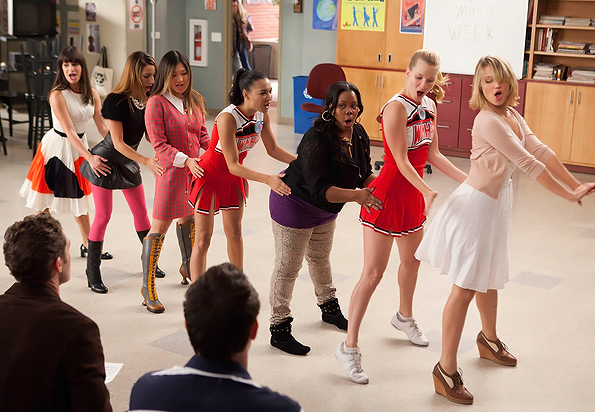 As expected, “I Kissed a Girl” wasn’t able to reach the season high Glee hit with “Mash Off” two weeks ago. Finn saves Santana from suspension by saying that she merely stage-slapped him, instead of whacking him across the face. The real reason Finn comes to the rescue? He’s worried about her and the upcoming public outing she’s going to face. So he’s crafted a plan wherein the New Directions and Troubletones pair up to pay homage to “lady music” by singing songs written by women for other women. The result is a hodge-podge of songs that fit the bill but don’t necessarily stand out:

“Perfect”:
Kurt and Blaine are up first, tackling P!nk’s power ballad of self acceptance. Kurt’s singing is technically perfect, but he lacks the raw emotion that takes the original to another level – but Blaine coming in with harmony on the chorus gets it there. The performance itself is pretty basic and boring, with the two of them awkwardly dancing around the choir room as everyone starts grinning stupidly – even Santana, though it’s all a front. As she explains, “With all the horrible crap I’ve been through in my life, now I get to add that.”

“I’m the Only One”:
Points for picking the song Melissa Etheridge wrote for a woman, but the only reason Puck is singing this song is to not-so-subliminally hit on Shelby. It’s a strain on his voice, and the performance is another cookie-cutter classroom setting. Despite the obvious Shelby overtures, Puck plays it off to Quinn like he was singing to Shelby about baby-sitting. Doesn’t matter: by episode’s end, Shelby will have called Puck in a panic when baby Beth falls and goes to the hospital, which results in the two of them sleeping together – a moment Puck mistakenly goes on to tell Quinn about.

“Girls Just Want to Have Fun”:
Finn does a somber slow take on Cyndi Lauper’s upbeat Eighties girl power hit that sounds nothing like him – the vocal is husky and, surprisingly, works. It turns turns the song into a Very Important Number that finally hits home with Santana.

“Jolene”:
Things are going swimmingly between Coach Bieste and Cooter until Sue decides she needs a man to keep her in the congressional race. She naturally hones in on Cooter, and Bieste channels her inner Dolly Parton while pondering her hatred of Sue for engineering the election and stealing her man. Bieste sings the tune with more emotion on her face than comes through in her voice as she watches Sue canoodle with Cooter. It’s unclear what the future holds: Sue places third in the election so she doesn’t necessarily need to stay with Cooter and Biest professes her love to him, Cooter doesn’t make a decision and yet another Glee love triangle is made official.

“I Kissed a Girl”:
We find out that the smear ad against Sue has aired, effectively outing Santana, when some sketchy sophomore rugby player comes up telling Santana he’ll turn her straight. It’s Glee girls to the rescue, as they tell off the sophomore and prance around the halls and into the choir room singing Katy Perry’s breakthrough hit. It’s an OK rendition (though no one’s vocals stand out over anyone else’s), but suddenly we’re done hating and moping and are over-the-top energetic and smiley. It doesn’t make sense and actually feels disingenuous – until we find out that Santana came out to her parents who are fine with her being gay. The real question is how Santana’s abuela will react. It’s a scene that should be touching but seems sort of formulaic especially when, in a slightly predictable and still entirely unfortunate twist, Santana’s grandmother kicks her out after she comes out.

“Constant Craving”:
Everyone is celebrating: Burt Hummel won the congressional race and Brittany won the school council race. Kurt even publicly congratulates Brittany, who tells him he’s still the most unicorn of them all. Schue asks Santana to “bring it home,” so she picks k.d. lang’s aptly titled number, and Shelby joins in. There’s some nice harmonies, particularly at the end when Kurt joins in, but in what seems to be a trend this episode, the song falls flat as a whole. And then Rachel comes in and tells everyone she confessed to Figgins that she stuffed the ballot box in Kurt’s favor. As a result Figgins suspended her for a week and –gasp! – prohibits her from competing in sectionals.

Bottom Line: This was like a bad episode of American Idol, where everything theoretically works within the night’s theme but was not necessarily the best song for the person singing it, resulting in an episode that was just musically meh. While there were undeniably significant plot moments, the emotional depth was lacking.