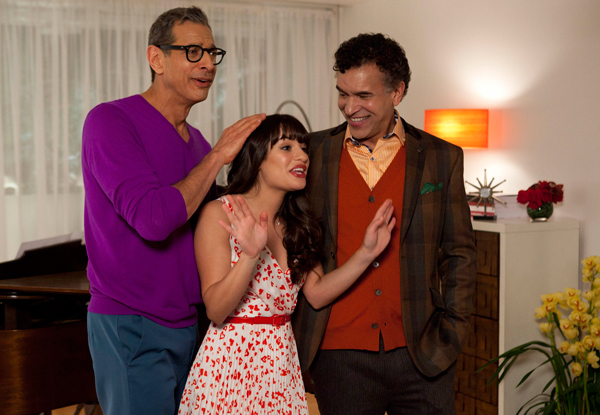 Despite cramming a lot of action into last night’s “Heart,” Glee felt (pardon the pun) light-hearted and lovely over the course of an episode that introduced Rachel‘s dads and Glee Project winner Samuel Larsen, answered the ongoing question of “will they or won’t they?” around Rachel and Finn‘s engagement (for now) and tastefully incorporated religion’s views into the show’s ongoing look at gay relationships. The assignment was to “find and perform the world’s greatest love songs.” Overall, they suceeded:

“L-O-V-E”:
The New Directions’ most stable and understated couple, Mike and Tina, sing a just-the-right-mount-of-cute rendition of Nat King Cole’s tune in the choir classroom (he’s suave; she’s sweet) as we see Artie and Rory try to win over Sugar with over-the-top Valentine’s day decorations and puppies. It’s her favorite holiday and she’s convinced her dad to throw her a bash at Breadstix – but no single people are allowed.

“Let Me Love You”
Artie goes for baller status when trying to win over Sugar with a smooth rendition of Mario’s song, but our favorite part is seeing Kurt sing back-up for a song he probably had never heard before. Even better: he joins Puck, Sam and Mike to dance, while Rory looks on with a glare. As predicted, the performance wins over the choir room – and Sugar.

“Stereo Hearts”
Mercedes introduces new God Squad member Joseph Hart (Larsen) to fellow members Sam and Quinn. Formerly home-schooled Joe just transfered in as a sophomore, guitar in hand, and loves the bible so much he has quotes tattooed on his body and has named each of his dredlocks after a book of the bible. “It’s like a teen Jesus,” Quinn remarks. Now a quartet, Sam suggests the God Squad celebrates Valentine’s day and achieves its goal of community service by offering singing telegrams to students at McKinley; the money raised will go towards adopting a highway.

Their first big number is a vocal Valentine from Finn to Rachel: Gym Class Heroes and Adam Levine’s aptly titled duet. Joe pulls off Levine’s intro (depsite having no awareness of popular music) and Sam wins for most surprising Glee vocalist by convincingly taking on Travie McCoy’s rap. Mercedes sings some complementary vocals, but we’re not entirely sure what Quinn is doing. Naturally, the God Squad finds a choir to help them on the bridge, turning the McKinley quad into a love revival of sorts. At the end, Santana, infuriated by an anonymous religious complaint to Figgins over her and Brittany‘s PDA, asks if they’ll sing one for her valentine, one Brittany S. Pierce.

“Home”:
Rory tells everyone that his Visa extension request was denied and he’ll be going back to Ireland at the end of the school year (convenient how both of the Glee Project winners entered as sophomores). He dedicates the Michael Bublé song to the New Directions, his second family. Rory’s a natural to sing Bublé, but we wish we would have gotten him away from sap while singing – his character can basically be described as Irish, lover of sentimental singing and desperately wanting to fit in at McKinley. Regardless, the ploy works: Sugar says she feels worse for him than Artie and asks Rory to be her valentine.

“I Will Always Love You”:
While debating whether or not the God Squad as an organization is OK with delivering vocal valentines to a gay couple, Newly Wise Quinn says, to her, Christianity means looking at the hard topics and dilemmas and be honest and truthful. This prompts Mercedes and Sam to address their relationship issues, again: he gives her a St. Valentine’s statue; she tells Shane about her and Sam. But Shane’s sadness makes her realize she dislikes herself for her lying and cheating. “”When it comes to love, I don’t know who I am,” Mercedes says, and decides she can’t be with anyone – Sam and Shane included – until she figures that out.

She begins a rendition of Whitney Houston’s Bodyguard classic that’s extremely sad, not only ’cause we feel for Mercedes but because, for once, Glee didn’t intentionally time a tribute, and so this one winds up being extra poignant. In light of Houston’s death, a lot has been said about her mothering in a generation of pop divas – and you can most definitely see that influence in Mercedes’ singing. It’s extra well-done of Glee to let her sing the full song, instead of an abbreviated take. The show’s tasteful tribute to Houston also extends to a simple card at the end of the show: “Whitney Houston, 1963-2012, We Will Always Love You.”

“You’re the Top”:
At the beginning of the show, Rachel and Finn received notes from “Mandy Patinkin” (close enough to Patti Lupone, we suppose) telling them to head to the auditorium for an emergency. The emergency was Rachel’s dads, Hiram (Jeff Goldblum) and Leroy (Brian Stokes Mitchell), who’ve found out about the engagement and want to have a celebratory dinner with the Hudson-Hummels to kick off the festivities. To welcome their new in-laws to nightly Berry dinner theater, Rachel’s dads do an appropriately over-the-top rendition of Cole Porter’s tune (currently being sung on Broadway by Sutton Foster and Joel Gray in Anything Goes) with some harmonzing help from their daughter. It emphasizes everything we’ve heard about her dads over the last two-and-a-half seasons, as seen in Finn, Carol and Burt’s unsure but enthusiastic reactions.

The dinner is actually, obviously, an attempt at some joint parenting reverse psychology: Hiram announces that the after dinner event is teenage lovemaking. All four parents speak about it naturally – too naturally for an initially mortified Rachel and Finn, who agree to “no monkey business.” Instead, we get a glimpse at Rachel’s extensive nightly bathroom routine, which includes a thorough shower and “an icewater face bath a la Joan Crawford in Mommie Dearest, the height of glamour.” The plan starts to work: an argument errupts when Finn asks to use the bathroom while Rachel is on track. As Hiram and Leroy clink glasses over a mission accomplished, Rachel awkwardly admits she doesn’t have any knowledge of what Finn’s future holds and he storms out.

Hiram is freaking out: “Honesty, respect, dance” are the three tenets of the Berry family, and they’re lying to Rachel about approving of her engagement. Leroy holds firm that their reverse psychology is the way to do it, and the two are shell-shocked when Rachel and Finn come down and announce that the cohabitation experiment has actually made them decide not to break up, but to have a May wedding, right after Nationals. We smell a season finale cliffhanger!

“Cherish/Cherish”:
The God Squad decide it’s “absolutely” OK to give a Santana’s vocal valentine to Brittany, and launch into a folky mash-up of songs named “Cherish.” Sam and Joe’s voices blend on the Association, while Mercedes and Quinn’s complement each other on Madonna. The public declaration gets everyone dancing, except for Artie, who mopes while eating a heart-shaped cookie as he looks on at Sugar and Rory. Rory almost ruins things by admitting he lied about his future deportation, but smoothly covers it over, telling Sugar not to worry about it. “Maybe my dad can buy Ireland!,” she responds.

“Love Shack”:
The surprises aren’t over – Blaine is back to kick off a tune dedicated to the lovers in the room: “Love Shack!” Mercedes takes the lead with help from Rachel and Brittany, while Blaine recruits Kurt to help out with Fred Schneider’s narration (we’d give Kurt the upper hand for his uncanny impersonation. Who knew?). It’s a bouyant and well-executed note to end the episode on, as everyone mingles while dancing and we spy a possible future coupling as Quinn grabs Joe’s hand.

Why Didn’t Anybody Sing About This? Kurt gets valentines from a secret admirer throughout the course of the episode. He assumes a still-recovering Blaine is responsible, and shows up at Sugar’s party, expecting to be reunited with his boyfriend. Turns out the man in the gorilla suit who thinks he loves Kurt is actually… Karovsky! He’s come a long way since his days of bullying Kurt at McKinley, and admits Kurt has helped him in his own self-acceptance. Kurt lets him down gently, but on his way out, Karovsky runs into a would-be bully from his new school (where Karovsky isn’t out yet) and Kurt helps him leave Breadstix scandal-free, but not suspicion-free.

Bottom Line: The episode was thoroughly enjoyable from start to finish, and we avoided secondhand embarrassment at the song choices (something that could have happened easily given the week’s theme.) But, we suspect that nothing will last this way for long, and that Sam and Mercedes and Rachel and Finn will find more romantic drama in their respective futures.

Last Episode: Not as Sexy as You Think