It’s not coincidence that Gibson’s long-awaited line of new guitars, dropped this week, touts conservatism and a back-to-basics approach: The Nashville instrument-maker is in crisis mode as it hammers out a company restructuring, battles supplier lawsuits and hunts for a new CEO.

Gibson declared bankruptcy in May after admitting that its attempts to branch out into a guitar lifestyle brand — including acquiring an expensive home and audio electronics business in 2014 — had saddled it with untenable debt, forcing it to “unburden” itself and refocus on its core business of musical instruments. CEO Henry Juszkiewicz told Rolling Stone at the time that the company’s bankruptcy and restructuring would help it “clean the slate” and “concentrate 100 percent of our energy into our competency in musical instruments.” As part of that reform plan, Juszkiewicz, who has headed up Gibson since the Eighties, left the company, leaving them on the lookout for a new leader. 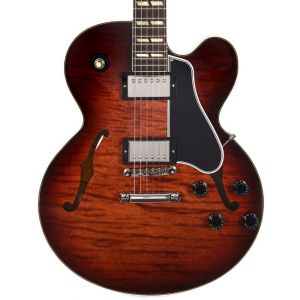 But while the company figures itself out internally, Gibson is also battling a $60 million lawsuit from a German Auto-Tune software maker that says they have stiffed it for its tech — and a number of other suppliers and partners are also still waiting on payment, according to federal bankruptcy filings. Meanwhile, longtime customers have in recent years been complaining of a decline in quality in products such as the signature Les Paul, alleging that Gibson has replaced its once-meticulous standards of workmanship and quality with shoddier ones that prioritize profit. (A Google search for “Gibson quality decline” leads to hundreds of threads on musician forums.) The question now is whether Gibson, with the financial relief provided by chapter 11 bankruptcy, can turn itself around enough to win those customers back — or whether it’ll end up falling to its main competitor and the one other preeminent guitar-maker in the U.S., Fender.

'There's the Elephant in the Room': Inside the Beautiful Chaos of Clive Davis' Pre-Grammy Gala

Per a not-so-anonymous “company in music industry” job posting spotted by Digital Music News last month and confirmed to have been posted by Gibson Brands Inc, Gibson’s new CEO will ideally have a background in major consumer products, digital engagement and e-commerce, as well as “experience in acquiring and integrating complementary businesses.” Music industry experience is preferred, but not required.