The Capitol Theatre holds a special place in Grateful Dead lore. A cozy auditorium about 30 miles north of Manhattan, it’s the site of many shows on the bootleg A-list (see 6/24/70 and 2/19/71 for starters). Like the Fillmore East and the Carousel Ballroom, it was a place where the band liked to settle in for extended residencies in their fire-breathing early days. Unlike those venues, it still exists: Relix publisher and club impresario Peter Shapiro reopened it last fall after a state-of-the-art face lift, and the result is one of the best music halls in the country. It feels like it was designed specifically to host the Dead, or at least a simulacrum, right down to the built-in light show and Northern California craft beer.

So it was big news among the faithful when Furthur – with Bob Weir and Phil Lesh, essentially the world’s pre-eminent Grateful Dead cover band – landed for a nine-night run this month. Deadheads flew in from around the country for sets that, fittingly, have looked backwards to the Sixties: “Alligator,” “Dark Star,” “Hard to Handle” and “Viola Lee Blues” have all turned up.

By comparison, last night’s show (number seven) was classic lazy late Seventies-cum-Eighties, played to a sold-out room of gray-haired vets, younger local bros, and at least one twirling gal whipping bystanders with blond dreadlocks. It showed that even on an off night, the old magic can still levitate a room. 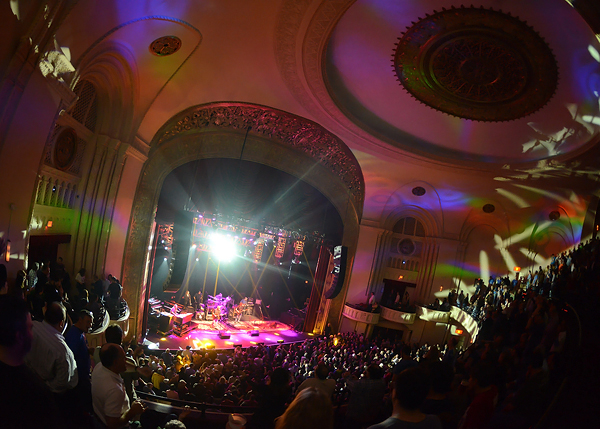 The first set ambled bumpily through slo-mo versions of “Row Jimmy Row” and “Candyman,” with a surprisingly jaunty, up-tempo “Ship of Fools” and covers including Dylan‘s “Queen Jane Approximately” and, from left field, George Harrison‘s “Any Road” (from the Beatle’s posthumous Brainwashed). Lesh, who rarely sang lead in the old days, and Weir, who limited himself to his own compositions and specific covers, have both become better singers of necessity in the decades since Jerry Garcia‘s death. Together with reedy-voiced Garcia manqué John Kadlecik, plus backing vocalists Sunshine Becker and Jeff Pehrson recalling the Dead’s Keith-and-Donna years, the group harmonies were gloriously creaky, frequently supported by an audience that quoted verses like scripture.

The other youngsters – drummer Joe Russo and keyboardist Jeff Chimenti – know their roles but brought their own flavor. Naturally, the group sound orbits around Kadlecik (frontman of the other reigning Dead cover band, Dark Star Orchestra), and he’s at the top of his game. Soloing in the molasses flow of the old folk standard “Peggy O,” he pulled out some amphetamine bursts recalling 1967 Garcia, throwing in some metallic chords of his own invention for good measure. In many ways, he’s a more energized, inventive player than Jerry was in the Dead’s later years.

Which is not to say that Furthur could ever really replace the Dead, any more than even the greatest living beboppers could replace the Charlie Parker Quintet. Like bebop, the Dead’s musical vernacular exists beyond any one group, living in any band that wants to play with it. The second set mix of “The Other One,” “Turn On Your Lovelight,” “Not Fade Away” and “Goin’ Down the Road Feelin’ Bad,” laced up with pieces of the feisty Blues for Allah instrumental “King Solomon’s Marbles,” had some predictably great moments – Lesh’s spidery six-string bass runs weaving around Weir’s rhythm sketching and Kadlecik’s darting, liquid melodic flares. But the high point may have been “Let It Ride,” a Ryan Adams cover from the singer-songwriter’s Dead-inspired Cold Roses. Sung by Lesh in his avuncular baritone, it showed a band listening to its own history through the lens of the present, more alive than Dead.