Soon after Frank Ocean released his avant-soul LP Blonde, the singer reminisced about the creation of the long-awaited LP in a pair of Tumblr posts.

“Two years ago I found an image of a kid with her hands covering her face,” Ocean wrote. “A seatbelt reached across her torso, riding up her neck and a mop of blonde hair stayed swept, for the moment, behind her ears. Her eyes seemed clear and calm but not blank, the road behind her seemed the same. I put myself in her seat then I played it all out in my head.”

In the note, Ocean writes about his “cliché” car obsession and about how vehicles impacted the recording of Blonde, from encountering a breathing, pulsating Porsche center console after his manager picked him up from Caltech’s psychedelics-consuming “Trip Day” to memories about riding around in his “sinewy crossover SUV” listening to rough mixes through an aux cord. Ocean noted that, since he moved to London nearly a year ago, he doesn’t drive much anymore.

Ocean also wrote about his experiences working on Blonde the past four years. “I found it romantic, sometimes, editing this project. The whole time I felt as though I was in the presence of a $16m McLaren F1 armed with a disposable camera. My memories are in these pages, places closeby and long ass-numbing flights away,” he wrote. “Recording in Tokyo, NYC, Miami, LA, London, Paris. Stopping in Berlin to witness Berghain for myself. Trading jewels and soaking in parables with the many-headed Brandon aka BasedGod in conversation.”

While Ocean didn’t go in depth about of his Endless/Blonde songs, he did mention how the latter’s “Godspeed” is “basically a reimagined part of my boyhood.”

“Boys do cry, but I don’t think I shed a tear for a good chunk of my teenage years. It’s surprisingly my favorite part of life so far,” Ocean write. “Surprising, to me, because the current phase is what I was asking the cosmos for when I was a kid. Maybe that part had its rough stretches too, but in my rearview mirror it’s getting small enough to convince myself it was all good. And really though… It’s still all good.”

In a separate Tumblr note, Ocean thanked fans for sticking with him in the four years since Channel Orange. “I had the time of my life making all of this,” Ocean wrote. “Thank you all. Especially those of you who never let me forget I had to finish. Which is basically every one of ya’ll. Haha. Love you.” 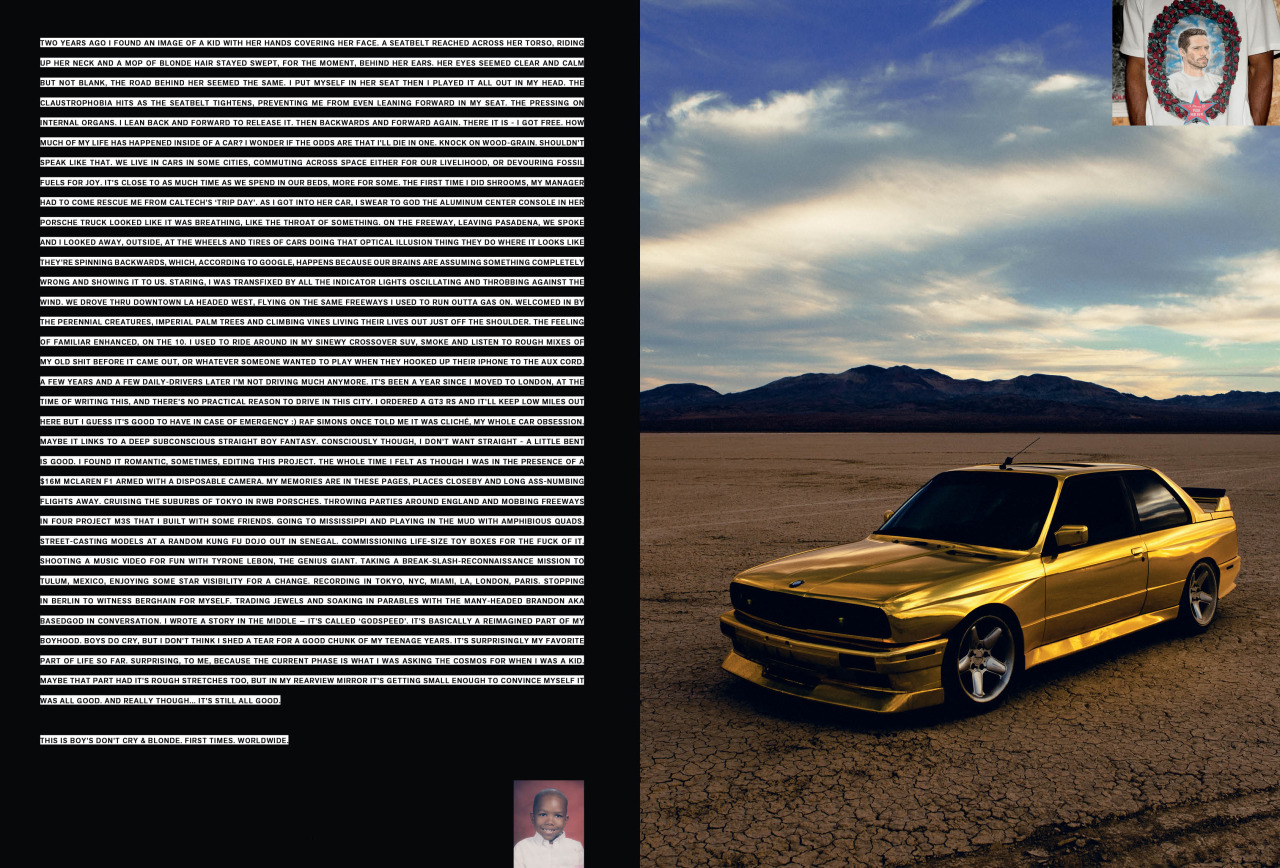