Mysteryland’s impromptu phone-charging party was held on two power strips and a few Ikea tables in the campground’s information tent. The phone chargers in the lockers (which sold out) didn’t always work, and there were no dedicated charging stations. It had rained five times already that day, and Berenice, 27, was huddled in some camo protective gear trying to get some juice.

“My feet are wet, I’m gonna get pneumonia,” she said into her phone, “but I don’t give a fuck.”

Never underestimate EDM fans and their ability to have fun at any cost. The Mysteryland electronic music festival, a staple in the Netherlands since 1993, held its first American throwdown this weekend. It was whimsical, powerful, endlessly creative and held at a gorgeous location — Bethel Woods, the site of the 1969 Woodstock. But fun or no fun: It was fraught with problems from the minute you woke up on the campgrounds on Saturday morning.

I stepped out of my tent around 10 a.m. to the sight of a dead snake and a pair of women’s underpants about four feet apart. While the festival was refreshingly intimate (only 20,000 tickets compared to, say Electric Daisy Carnival Vegas’ 300,000) and camping even more so, there were barely enough amenities. The shower lines were long enough to settle for “smelling bad” as the superior option, and though I would have loved to time the wait to get breakfast, my cell phone died and, again, there were no charging stations. Though one could have easily lost their appetite as time passed on the soggy, squishy, worm-covered slope (“Don’t get the clam roll,” joked Caitlin, 22. “They’ve been out here all day.”) I settled for a handful of potatoes and rice, literally served by a gloved hand.

At this point, the festival grounds weren’t open and security wouldn’t let you leave the campsite, even for a leisurely walk. This meant that, basically, everyone was under house arrest (tent arrest?) until 12:45. We’re obviously not talking Woodstock ’99 levels of indignities here, but it was clear that we were watching a smart and ambitious fest go through a few growing pains. 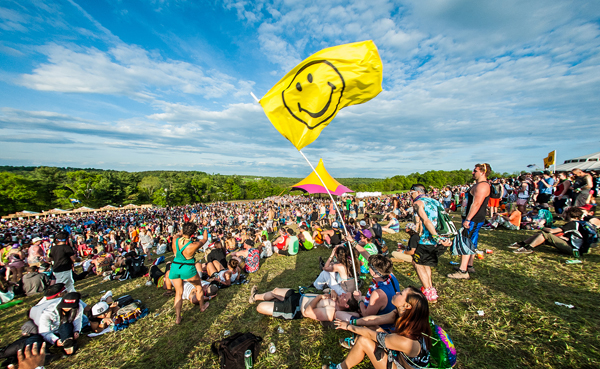 In fact, one of Mysterland’s advances was so forward-thinking that Billboard had to report on it: Wrist chips meant that Mysteryland was the “first cashless multi-day music festival in North America,” but those chips didn’t always work. Beer vendors were even forced to turn people away. Have a problem? Well there’s another long line you can wait in to figure it out. Five ATMs (service charge $4.95) sat on the campsite mostly useless, except if you squeezed behind them to steal their power strip for charging your cellphone.

From here, the queue from the campground to actually attend the festival took about 40 minutes — that is, unless you had a backpack or a bag or an opened pack of cigarettes, which you had to return to your tent.

“There was no rules at Woodstock,” replies Joe, 23, before presumably emptying all the water from his CamelBak. “Those motherfuckers were butt naked.”

Once you actually got past the frisk station and drug-sniffing dog, the event promptly became a lot more extraordinary. Bethel Woods is truly beautiful, with its steep hills overlooking woods, lakes, puffy clouds — basically all the stuff that’ll make you understand art’s Hudson River School. Unlike the crammed quarters at, say, Lollapalooza, there was all kinds of open space to lay shirtless on the grass, do cartwheels or run around in a unicorn mask. The Redhawk Native American Arts Council performed an incredible opening ceremony of music of the Northern plains, hitting a four-on-the-floor beat that predates house music by a few centuries. (Alas, this honoring of America’s ancestors didn’t exactly trickle down to the white kids at the fest wearing headdresses.)

The meticulously constructed stages were almost more of a draw than the artists: The mainstage was like the “It’s a Small World” castle gone down Alice’s rabbit hole, the Spiegeltent felt like a secret steampunk bar party decked out in stained glass and mirrored columns, and the Boat was just a cool-looking wooden boat.

Yes, there were disappointments. The cashless system shut down completely, and one vendor groused that they didn’t even bring change for this possibility. Brooklyn’s trendy food meet-up Smorgasburg was in full effect, but the lines were all like Mighty Quinn’s on a Saturday (translated to non-Brooklyn: “very long”). A minimal techno nerd-out with Kompaklt’s own Kölsch was cancelled after he got sick, before his replacement, Olivier Weiter, passed out liquor and mouthed synth lines. The art installations were mostly variations on wood and paint. The “Vinyl Only” stage had a pair of CD-Js, which definitely got used. You couldn’t bring liquid in your CamelBak, but someone was allowed in with a vuvuzela. 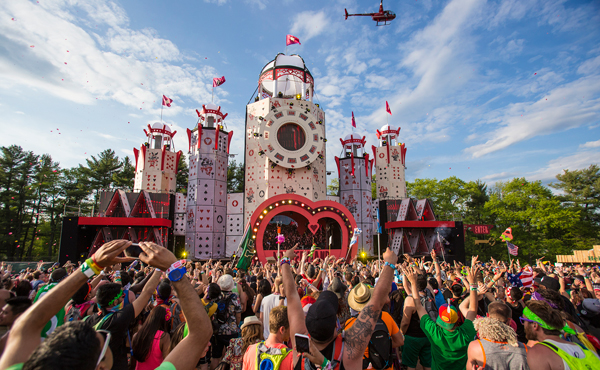 It’s my own problem that I don’t really care for Dutch house, the sound clogged the mainstage (Nicky Romero, Showtek, Dyro), so, like, everyone else searching for more dangerous or ugly or proudly obnoxious sounds, the furthest outskirts of the fest became my place to congregate and pogo. To the east was the Boat, the best place to hear bass, trap, dubstep and 2-step rhythms — basically the stage most likely to break out into a moshpit. That’s where Zomboy got a full workout, air-drumming to buzzsaw synths, and where you could hear UK dance polyglots Let’s Be Friends playing an EDM version of Nirvana’s “Smells Like Teen Spirit” just yards away from where Jimi Hendrix played “The Star-Spangled Banner.”

Further south was “the Sound of Q-Dance,” a stage that focused on a different Dutch genre: hardstyle. Basically the screamocore of techno, hardstyle mixes sickly-sweet synths (the clean part) with high-BPM releases (the hard part). For Sylence, the bass was beautifully rubbery and gross, like a door slamming in a funhouse, and people skanked furiously. Here’s hoping this is the next electronic movement that rock bands start pilfering from.

As for festival headliner Steve Aoki, he was a total cornball, hopping around with his bros, spinning gauche hip-house like Outhere Brothers (“Boom Boom Boom”), gesticulating for a house mix of “Thriller” and throwing cakes like he’s EDM’s Gallagher. Of course, the loveable longhair goof persona is part of his appeal, and if it gets the party started, then you’re probably a grouch for doubting it. And despite all its technical snafus and weather problems, Mysteryland was the same way, an all day party that couldn’t be stopped by worms or water. Boom, boom, boom, now let me hear you say way-o.