On July 25th, 1965, Bob Dylan walked onstage at the Newport Folk Festival, plugged in his 1964 sunburst Fender Stratocaster and tore through a scorching three-song set. It was a crucial turning point in his career, and it quickly became rock & roll legend — the moment when Dylan transformed from a protest folkie to a rebel genius. But the guitar Dylan played on that mythic afternoon went missing for the next 47 years — until recently, when a team of PBS researchers told New Jersey resident Dawn Peterson that she had it in her home.

Peterson’s late father, Victor Quinto, was a private pilot who worked for Dylan’s manager, Albert Grossman, in the mid-1960s. “After one flight, my father saw there were three guitars left on the plane,” she says. He contacted the company a few times about picking the guitars up, but nobody ever got back to him.”

Last fall, Peterson asked PBS‘s History Detectives to help verify her find. The 1964 Stratocaster came with 13 pages of typed and handwritten song lyrics tucked inside its guitar case — but host Wes Cowan was skeptical at first. “It’s so important, historically and culturally, that I couldn’t have imagined Bob Dylan would have just left it on an airplane,” he says.

In fact, Dylan says that‘s not what happened. “Bob has possession of the electric guitar he played at the Newport Folk Festival in 1965,” his attorney, Orin Snyder, said in a statement. “He did own several other Stratocaster guitars that were stolen from him around that time, as were some handwritten lyrics.”

But experts make a strong case that the guitar in question is the same one Dylan played at the festival in 1965. Vintage-instrument specialist Andy Babiuk was convinced after PBS asked him to compare it to close-up color photos from Newport. “The more I looked, the more they matched,” Babiuk says. “The rosewood fingerboard has distinct lighter strips. Wood grain is like a fingerprint. I‘m 99.9 percent sure it‘s the guitar — my credibility is on the line here.” 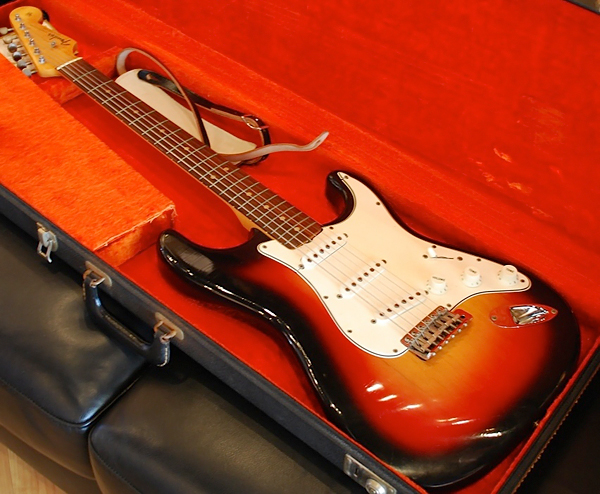 History Detectives also called in Dylan memorabilia collector Jeff Gold, who often helps auction houses authenticate items for sale. “A vast percentage of the stuff I get shown isn‘t real,” he says. “By nature, I‘m a defeatist. But this was obviously real.”

The lyrics that came with the guitar are evocative fragments: “There‘s bullets in my eyes but I still can see/It‘s just these headaches that are killing me.” A handful of lines appeared on tracks that Dylan recorded for Blonde on Blonde in 1965 and 1966. “I own a manuscript of ‘Absolutely Sweet Marie,‘ and there‘s this line, ‘the six white horses,‘ ” Gold says. “In one of these manuscripts, Dylan had written ‘six flying horses,‘ and then above ‘flying‘ he‘d written ‘white‘ and ‘the.‘ It was obvious the same person had written both of them.” Other fragments within the lyrics wound up on “Medicine Sunday,” an early version of the Blonde on Blonde song “Temporary Like Achilles.”

The episode of History Detectives (which also includes a brief interview with this reporter) airs on PBS Tuesday July 17th at 9:00 PM EST.

If it‘s real, the guitar is estimated to be worth as much as $1 million — but does Peterson legally own it? Maybe not. “It’s his guitar until he makes an affirmative act to give it to someone else or sell it,” says lawyer Josh Grier, who represents artists including Wilco. “I think if they put it up to auction, Dylan has a claim to the proceeds. If he finds out beforehand, he might be able to stop from from doing it.” In 2005, Peterson wrote to Bob Dylan’s management and requested that he waive any claim to the guitar. Dylan’s team declined, and said that the guitar should be returned. For now, Peterson is keeping the guitar in a secure, climate-controlled environment; she has not decided whether to sell it. “I have to discuss it more with my husband,” she says. “Things have crossed my mind.”