Lisa Marie Presley’s Storm and Grace is the album she was born to make – a raw, powerful country, folk and blues collection that finds her embracing her Southern roots and family name.

Making the record’s Americana pedigree stronger is production by Grammy-award winner T-Bone Burnett (O Brother, Where Art Thou, Robert Plant and Alison Krauss’ Raising Sand). But the direction of the album was established well before Burnett came on. Presley traveled to England, where she collaborated with songwriters including Richard Hawley, Ed Harcourt and Travis’ Fran Healy, to find her roots.

Presley spoke to Rolling Stone about the album, why she felt more comfortable making an American record in England, how Burnett restored her faith in music and not fighting herself anymore. 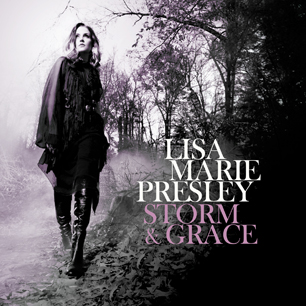 It’s such a raw record. Was it tough to make?
It was easy to make, but I had to go far in order to make it. I went to England. I was kind of uninspired and tapped out creatively from certain experiences previously on other records, so I just really needed to remove myself far away and get in a whole different setting. And I spent eight months getting used to being around there writing, and it just really easily unfolded and really naturally and organically happened.

Did you know T-Bone would be coming to the project when writing?
No idea. It all happened with me telling Simon Fuller [her manager and CEO of XIX Entertainment], “I really don’t want to be in any typical situation anymore. I want to just remove myself entirely, go as far away as I can.” And thankfully he’s set up over there, so he just put me with different people. We wrote 30 songs in eight months between me and the writers. I had it, but I wasn’t in a hurry. I told Simon early on, a dream come true for me would be T-Bone. And I told him I loved Raising Sand and the whole thing. After I’d come back and I had the 30 songs written, I got a phone call – “T-Bone heard it and he wants you to go to his house at 5 o’clock and meet him.” And I flipped out. I had no idea, I didn’t even know he had heard them.

What is so fascinating is you went to England to make a quintessential American record.(Laughs) I know, it’s completely crazy, isn’t it? I was supposed to be writing some kind of a synopsis about it today and I kept thinking it’s just so ironic – finally the earthy, organic, rootsy, bluesy record comes out of me, in England, with English writers. I can’t tell you how many times people would say, “Go to Nashville and write with these writers and do this and do that,” and try to push me in that direction. And it just didn’t feel right for me. It wasn’t contrived, the songs were already there, they had their tones, their textures.

It is ironic, but maybe not that surprising given there is a long history of English musicians embracing and understanding American music.
It’s true. They happen to know American music history probably more than Americans do. They’re very well-educated on it. And this record’s always been in me. I am where I’m from, I’m never going to not be from the South. So it’s in my nature. It’s just that in the past there have been times where someone was deliberately trying to push me into the Nashville scene, or scenes, that just felt so contrived and unnatural to me.

Do you feel more comfortable with your roots as you’ve gotten older, or was it finding the right people?
It’s a great question, and the answer is both. I’m always feeling a bit like I need to fight and kick, I don’t know why. But all I ended up doing in the past by trying to do anything else was stepping and tripping on my own feet. It didn’t prove anything to anyone to do something completely different that had nothing to do with anything. It was always against myself and hurting myself, though I was thinking I was fighting other people. I had to go through those phases, I did. So then, yes, I’m not doing that anymore. But it was also being around people I knew weren’t gonna do that with me. The writers I was with weren’t trying to push me in a direction. They had no agenda. Some of them had never written with anyone before. Like Richard Hawley had never sat and written a song with anyone but Jarvis [Cocker] in the past. And he was kind of nervous, because he was like, “I’ve only written with Jarvis.” And then we wrote “Weary.”

This record strikes me as being intensely personal. How important was T-Bone in creating distance for you from the record and serving as a sounding board?
Just the fact that he wanted to do it fed life into me. My light was dimmed. The way the music industry had gone, I was disheartened. And about the second or third day in the studio I pulled him aside and said, “I just want to thank you – by doing this and believing in me and doing this record with me, you’ve really given me some light again.”

Are you a big Britpop fan?
It is something that my husband has migrated towards forever, and he is actually the one who came up with the idea of writing with Richard. So then we kind of started heading down the road because it went so well, and Ed came on. For instance, on the songs I wrote with Ed, he sings harmony with me, and I’ve never had anyone else sing harmonies. I’ve always done my own. My management put me with lots of different people and I ended up gravitating and having a great thing with Richard, Ed and Sacha Skarbek.

What do you take from it when you listen to this album?
In the past, by the time the records came out and everyone heard them, everyone said, “Oh, this is nice, this is great, oh, I love the record, blah blah blah.” I could never really get perspective on it, and this time no one’s heard it, my mother hasn’t even heard this yet. It’s so personal that I haven’t really played it for anybody.

T-Bone really puts himself into a project. Will he be involved in any other capacity, like in live shows, for example?
I’ve adopted him as a paternal presence in my life, so any way I can have him around I would love to have him around. I just adore him, so I’ve definitely adopted him and let him know that. If I can have him on stage and it’s in the cards, I would be really happy about that. The thing I wanted to say too was just the fact that I didn’t know we were gonna record it live. In the past you would do it a certain way, so it was a little bit out of my comfort zone, but it was great. He told me, like, three days beforehand, “Oh, by the way, we’re doing it live.” So I was like, “Oh my god.” But it was really great to do it that way. It pushed me a lot.