Charlie Askew was an early fan favorite (and my personal favorite) on “American Idol” this season, quickly amassing a devoted fanbase of Awkward Turtles with his quirky charm, theatrical performances, and weirdness-glorifying ethos. His exit from the show, after an unabashedly emotional (if polarizing and misunderstood) rendition of Genesis’s brooding “Mama,” was tough to take–and then the Turtles had to re-experience that heartbreak, when Charlie competed for a bonus spot on the Idols’ summer tour and didn’t make it through again. But really, if you think about it, Charlie was a top 12 contestant this year. If only this season had been formatted like previous seasons, instead of skipping straight to a top 10, things might have been different for Charlie–and for Season 12, which, frankly, has been a lot less interesting, and LOT less rocking, without him.

Anyway, since leaving “Idol,” Charlie has kept a frustratingly low profile, leaving some concerned Turtles wondering if he’s okay after his rollercoaster reality-TV ride. But the good news is, he’s just been busy working on his original music–so “Blue Sky Diamond,” the self-penned song he performed on “Idol,” is just the first of many Askew tunes that fans will soon hear from this talented kid. And the equally good news? Charlie recently broke his post-show silence to about his “Idol” experience exclusively with Yahoo!’s Reality Rocks.

Discussing his “Mama” performance, and why he was so emotional that night, Charlie says: “[The song] resonated with what I was going through at the time. I went through a pretty rough breakup in June, so like all the repercussions of that. It was therapy, in a way, to pick a song like that–very dark, very brooding–because deep down inside for a long time, I carried around a lot of brooding angst and anger and all that. Not just for [my ex-girlfriend], but for like this female archetype, I guess–like my mother was the one who initiated my parents’ divorce, so I was kind of singing it to her as well. I went back to when I was 12 years old.” 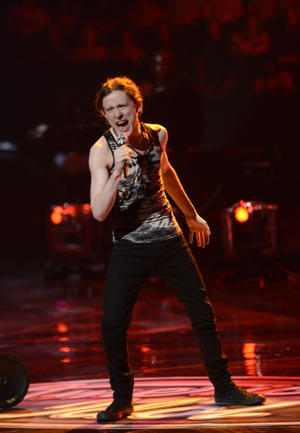 Charlie also explains that his unexpected song pick was “kind of fighting back about this cute little-brother image that [the show] had of me–which is like, if anybody on that show knew half of my full life story, they wouldn’t be saying that at all. There’s a lot that they don’t know and they don’t understand, but that’s okay.” As for why Charlie didn’t open up more about his personal life on “Idol,” when so many other contestants share (some might even say exploit) their own sad tales, he says: “I didn’t want that to be the frontpage of my story. I’m here to do a singing competition and entertain people, not dump my baggage on them!”

As for his the shaken demeanor as he faced the judges’ harsh critiques after “Mama,” Charlie makes it clear: “I can take a little criticism. I’ve been through much, much worse…I was hurt by what Nicki [Minaj] said, but the reason wasn’t because she was critiquing me in any negative way. I’m used to that. I do this for negative and positive criticism. But all the comments she kept throwing out there were about my image and my outfit and my arms…and not the singing! And I thought of all people she would understand where I was coming from with this performance. It was almost hypocritical of her, I guess, to say that. She changes her image every day, you know?”

As for anyone who thought Charlie was experiencing a meltdown or breakdown that night, Charlie laughs that off. “No, not all. A lot of people thought that I needed to go back to therapy and get diagnosed for depression, or that I was crazy and needed to be locked up, all that good stuff. But you know, Eminem went through worse and he’s the bestselling artist of the 2000s, so…”

Check out Charlie’s full two-part interview here, for more conversation about his plans to form a band, his musical influences, his ex-Deadhead dad, what happened when he tried out for Steven Tyler in “Idol” Season 11, how Phillip Phillips inspired him to try out again in Season 12, and if he’d ever try out for “The Voice.”