Last night, Elton John performed at the 20th annual Race To Erase MS benefit in Los Angeles. The event is put on by activist and author Nancy Davis to raise funds and awareness for the fight against multiple sclerosis. It’s grown considerably since its start, from a ski event in Colorado to a celeb-laden dinner and concert that in recent years has featured the Eagles, Heart and more. Despite that expansion, there was a feeling of community and intimacy last night at the Century Plaza Hotel. Jack Osbourne, who was diagnosed with MS last year, was honored along with his mother, Sharon Osbourne.

The camaraderie stems from the Osbournes’ long history with John. “It’s got to be 40 years ago – we go back that long,” Sharon told Rolling Stone. “He came because of Jack. He’s known Jack since he was born. Elton has always been here for our family and a great friend, and that’s one of the things about being blessed with great friends – they’re there with you,” she said. 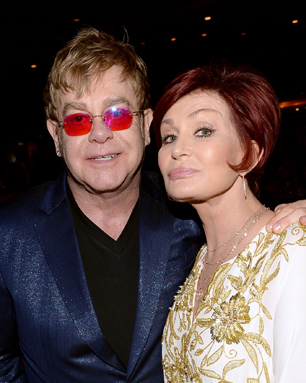 After opening with “Tiny Dancer,” John quipped, “Sharon Osbourne has so much information on me I had to be here.” Then, getting serious, he praised both Sharon and Jack for their courage and activism in the year since Jack revealed his MS.

John also teased his longtime friend Rod Stewart and got sentimental when he explained that one of the thrills of the night was getting to sit with him. “We go back a long way,” John said from the stage to his fellow British icon. “I love you, man.”

Following John’s performance, Stewart told Rolling Stone the affection was mutual. “I’ve just been enjoying the performance of my mate,” he said. Stewart gave advance praise for John’s upcoming album The Diving Board, due in September: “It’s so good,” he promised.

John dazzled in his solo performance: He ran through several mega-hits, from a boogie woogie “Philadelphia Freedom” to an extended “Rocket Man.” Other standouts in the nearly hour-long set included “Your Song” and “Don’t Let the Sun Go Down on Me,” which John recalled first playing for Stewart during a car ride together nearly 40 years earlier. A celebratory “I’m Still Standing” had everyone dancing, and it perfectly captured the resiliency of the night.

In recent years, John has been focused on his Las Vegas residencies and hasn’t toured much. Last night Ziggy Marley and country star Kellie Pickler got their first-ever opportunity to witness him live. Pickler had a suggestion for the singer: “I think he needs to come to the CMAs one year. That would be amazing,” she said. It’s not so far-fetched, as there are a lot of rock acts who go to the Country Music Awards, and John has been very open to working with young artists in the past. If Pickler gets her wish and she got to perform with him, what would she want to do?

“It would be fun to sing a classic country song – maybe pull out an old Tammy [Wynette] and George [Jones],” she said. “He can do anything he wants to do. He’s Elton John.”

For Marley, the chance to see John and support the cause made for an easy choice to come out. “That’s the good thing about having someone like him play events like this; he brings us out to support,” Marley said.

Marley, like Guns N’ Roses guitarist Ron “Bumblefoot” Thal, was on hand because of personal connections to the illness. “We have a friend who suffers from MS and she invited us here to lend support to the cause,” Marley said. Thal explained, “One of my best friends was stricken with the disease about 15 years ago and we started a non-profit organization, a group in New Jersey, the MS Research Foundation. I am here to give my positive vibes, my support, anything I can do to help spread awareness.”

Thal summed up the aim of all those in attendance last night when he said, “We all have the same goal here. We want to do something to maintain the quality of life [for those] that have this disease.”