When singer Ellie Goulding hints at a secret show, people will listen.

The enchanting English songbird dropped that gem to her 1.2 million Twitter followers a day before her exclusive pop-up performance for Yahoo! Crash Concerts at Los Angeles’ most Instagrammable location: LACMA’s “Urban Lights” exhibit, a cluster of 202 antique street lamps that have become the museum’s defining image. We’ll save you the Lights puns.

Emerging from the electric forest, Goulding appeared in a hot pink fuzzy sweater, leather pants and her signature white-blonde hair to greet the packed courtyard that extended to the facing balconies. Fans cheered and passersby excitedly took to their phones to share their shock at coming across the singer’s first ever surprise show. Considering the appearance was bookended by two LA dates that immediately sold out, this was the only chance for many to witness Goulding’s magic.

The singer gave the crowd goosebumps with an intimate acoustic set and even had an admittedly “geek” moment when she had to check her lyric book during a song. The lucky fans surely saw a side of Goulding that most fans don’t see! 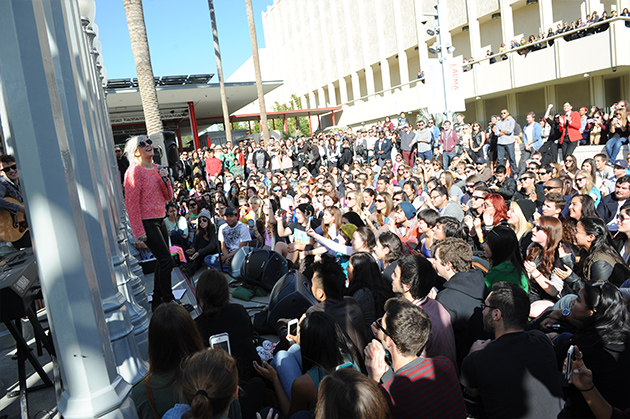 The adorably humble singer tweeted she broke out in tears upon seeing the turnout to the surprise show, convinced that no one would come.

The pop up show at LACMA yesterday was amazing. I honestly did ask if anyone had turned up and when I saw you all I cried, sorry

But of course fans would come! Even culture vulture Perez Hilton caught wind of the show and called Ellie Goulding’s performance “bloody BRILLIANT!”

The singer shot to international acclaim when she was given the incredible honor of performing at England’s Royal Wedding reception in 2011.

Warmed by California’s gracious winter sun and bathed in Ellie Goulding’s bewitching voice, the crowd of fans (and Ellie herself) were all reminded that truly, “anything can happen.”