Even in his late-Eighties, early-Nineties heyday, genre-bending country star Dwight Yoakam was more Bakersfield than Nashville. Nevertheless, Nashville came out in full force this weekend for Yoakam’s first Music City headlining appearance in almost seven years. The pair of shows, held at the historic Ryman Auditorium, marked the fastest sellout of the 56-year-old singer’s near-30-year career.

“My career has not been [in Nashville], so it’s not like it’s a homecoming,” Yoakam told Rolling Stone, hours before taking the stage Friday night at the converted tabernacle colloquially known as the Mother Church of Country Music. For Yoakam, as for most singers, the theater’s stage is consecrated territory. “I remember the first time I walked in and stood there, you feel the haunted energy of all those legendary country artists,” he recalls. “It’s always an experience performing the Hallowed Hall.” And if these shows weren’t a homecoming, Nashville didn’t get the memo.

Dwight Yoakam Teams With Beck for ‘A Heart Like Mine’

The venerable venue erupted when the singer, clad in a cowboy hat, white boots and denim, strolled briskly to the stage. Without uttering a word, he counted his shit-hot, rhinestone-bedazzled backing band into “Take Hold of My Hand,” the opening track from his 2012 comeback album 3 Pears. In what felt like a matter of minutes, Yoakam and the band barnstormed through five songs – including a rollicking “Turn It On, Turn It Up, Turn Me Loose” and his cover of Elvis Presley‘s “Little Sister,” a Top 10 hit for both singers – before coming up for air and addressing the crowd for the first time. 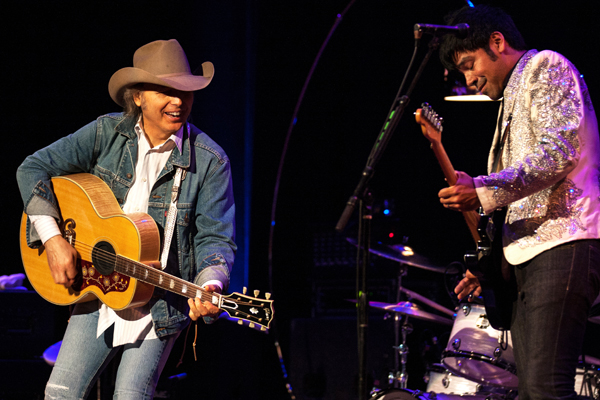 Both nights, that quick-fire pacing hardly let up throughout the two-plus hour shows. Anchored by multi-instrumentalist Brian Whelan, wunderkind guitarist Eugene Edwards, bassist J.J. Clark and stick-savvy ex-Smash Mouth and Tripping Daisy drummer Mitch Marine, Yoakam and co. played like a well-oiled punk band putting on a James Brown revue, unleashing one barn-burner after another. Even when Yoakam crooned tear-in-beer ballads like the yearning waltz “If There Was a Way” and the Ashley Monroe co-written 3 Pears cut “It’s Never Alright” with a wailing twang that could melt butter, he did so with potent urgency.

From Yoakam’s long list of killer Americana covers, his weekend appearances included his cowpunk reinvention of Johnny Cash‘s “Ring of Fire” – which the singer pulled off, despite the fact that the Ryman sees renditions of the song at about the same rate ER doctors treat gun-shot wounds – and Buck Owens’ “Close Up the Honky Tonks,” which, on Saturday night, Yoakam dedicated to the song’s writer, Red Simpson, who was in attendance.

The shows weren’t short on Yoakam’s own classics, however. Past singles and fan favorites like “Honky Tonk Man,” the could’ve-been-a-Tom Petty-hit “Things Change” and the drunkenly whimsical saloon boogie “This Time” each packed a full-bodied wallop. That was due especially to the incessantly percussive jangle of Yoakam’s acoustic guitar, which was so loud in the mix and such a driving sonic factor that the sound of the band changed entirely in texture and color any time the singer stopped strumming. A set-closing victory lap lining up the eternally wistful “A Thousand Miles From Nowhere,” the country shuffle “Little Ways,” his breakthrough signature hit “Guitars, Cadillacs” and the roadhouse stomper “Fast as You Can” made a hootin’, hollerin’ rock & roll honky tonk of the Mother Church. 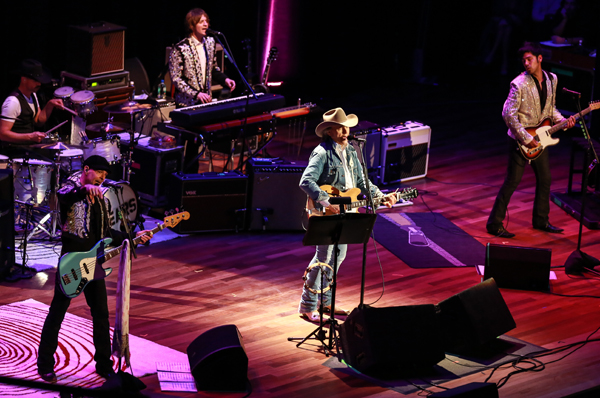 It was a fitting presentation for a singer whose ironclad alloy of rockabilly, Bakersfield worship and British Invasion pop has long made him both a postmodern preservationist and a progressive misfit in country music. “I always have straddled the fence of the kinda Bakersfield neo-honky-tonk stuff,” he said, “straight to the jangly, country-rock cowpunk . . . I think my music, like a lot of artists’ music, lives sometimes independent of the boundary of genre. I know there are a lot of people that like Johnny Cash records that like the Clash.”

The continuing vitality of that singular country-rock conflation was in full effect on the 3 Pears selections, which fit seamlessly within the shows’ Yoakam catalog overview. Although the singer took the rare banter break to thank the crowd for their patience enduring new songs, he really didn’t have to, as audience members hung on every note of Pears standouts, such as the dreamy, country-psych lullaby “Waterfall” and the title track, a shimmering Brill Building-gone-Bakersfield piece of pop perfection punctuated by glockenspiel, panoramic guitar jangle, plucking mandolins and a timeless groove borrowed from “Be My Baby.”

“I feel like I’ve come full circle,” Yoakam said. “I’m back to the kind of following that I had on the first EP breakout record that I did (1984’s Guitars, Cadillacs, Etc., Etc.), when we were playing the cowpunk scene, as it was described, in L.A. in the early Eighties . . . It’s like a full-circle feeling to coming back around and having this album be Number One on [Americana Radio] for eight weeks. It’s great!”