Jamaican dancehall is undergoing a renaissance in both hip-hop and indie music. Jay Z sampled Sizzla for Magna Carta. . . Holy Grail‘s “Crown,” while A$AP Ferg recently name-checked the iconic Shabba Ranks. On Yeezus, Kanye West repurposed dancehall DJs (in JA parlance, DJs are the ones on the mic) ranging from Capleton and Assassin to Beenie Man. And lest we forget, Long Beach’s finest, Snoop Dogg, rechristened himself as Snoop Lion last year.

In indie circles, there’s a rekindled interest in ska, rocksteady, dub and digi dancehall happening as well, primarily in California. Noisy lo-fi acts like Sun Araw and Peaking Lights dabble heavily. Last year, Sun Araw teamed up with legendary roots reggae vocal group the Congoes while the latter released a dub showcase. Large ensembles such as 11-piece band the Lions and the Aggrolites — who have backed everyone from Prince Buster to Tim Armstrong of Rancid — have proven to be live favorites, and Latin-language ska punk bands are huge on the festival circuit. And in the Echo Park neighborhood of Los Angeles, weekly reggae dance party Dub Club has been packing the club and rocking steady for over 13 years.

“Reggae is a funny thing: it’s underground but it’s really popular,” Dub Club resident DJ Tom Chasteen tells Rolling Stone when he calls in from his Highland Park studio. He was in the process of putting together a soundsystem, consisting of a half-dozen speakers and two 18-inch square speakers that a grown man couldn’t budge. Chasteen came up in hardcore punk bands in the early Eighties and made techno music in the early Nineties. “I would play reggae in the chill-out rooms of desert raves,” he says. “But reggae is the original remix culture: hip-hop has direct roots in reggae and Skrillex and dubstep come straight from Jamaican bass culture.” Foundation Come Again, the first album of original productions to come from the weekly party, recently arrived with contributions from Jamaican luminaries like Big Youth, Dillinger and Ranking Trevor. 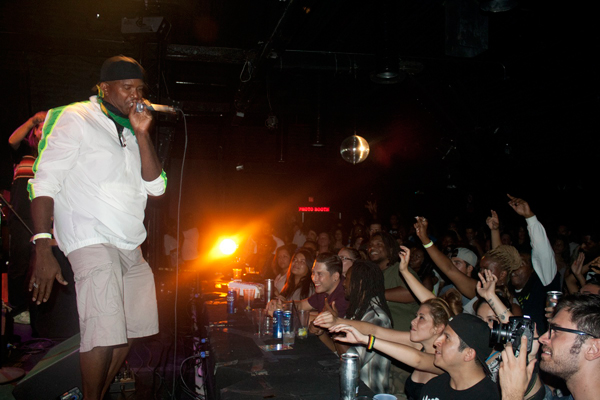 Taking place every Wednesday, Dub Club feels like a street market outside, with vendors selling Italian vegetable soup as well as grilled sausages. Inside the Echoplex, stands sell beads, beanies and tees with the Adidas logo rendered into a pot leaf. The party averages between 700 and a thousand revelers week in and week out, the soundsystem pumping out sinus-rattling bass on classic reggae cuts ranging from Bob Marley to Jacob Miller. Throughout the night, guests come up to toast on the mic, play hand drums, or — in the case of three college-age ladies — twerk.

So what led Chasteen and co-producer Tippa Lee to finally make a full album? “I looked at these classic Jamaica soundsystems,” says Chasteen, who produced the tracks and had Lee take them to Jamaica to record vocalists. “Studio One made music, they didn’t just cut dubs. That’s how you grow into something.” Tippa Lee was born into the island’s soundsystem culture, even recording his first single at the young age of 12 in the studio of iconic dub producer, King Tubby.

“Scientist once told me there’s only three countries that have produced music popular all over the world: America, England, Jamaica, though I’d throw Cuba in there,” Chasteen says. “There’s this vitality to Jamaican music. Jamaica really is the loudest island.”